Home > Advice > Why Toasted Grasshoppers are Cuisine of the Future 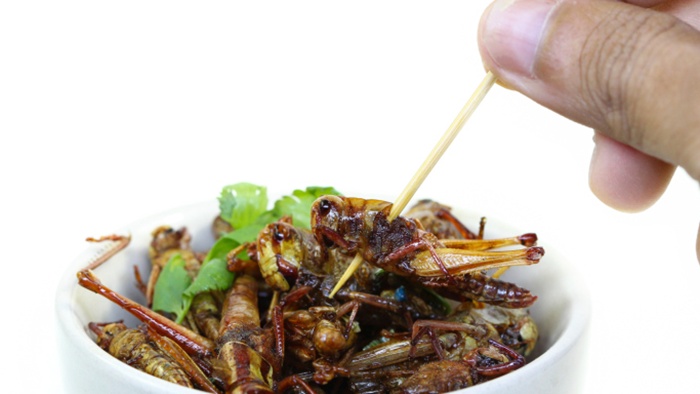 Whether it’s a home-cooked meal, fast food or gourmet restaurant fare, your traditional culinary route more than likely ignores the important nutrition of those itty-bitty bugs – everything from beetles to mealworms. That’s right: Insects.

Indeed, as the world’s population approaches 8 million, a growing number of experts say that people will soon have no choice but to consume insects. That’s because our land and water resources are coming under increasing strain to farm enough beef, pork and chicken to feed everyone.

The consumption of insects as food is called entomophagy. The practice is age-old, with around 2 billion people already incorporating hundreds of insects into their diet, according to the United Nations (UN) Food and Agriculture Organization. In its May 2013 report, the UN reminded us that there are more than 1,900 edible insect species, which can be cooked or eaten raw.

Chapulines (cleaned grasshoppers toasted with salt, lime and chile) are an ideal gateway bug for nervous, first-time insect eaters, CNN reports: “Their well-balanced, salty, spicy, tangy flavor is reminiscent of some of our nation’s finest and most familiar snacking products, and fried or toasted exoskeleton makes for killer crunch.”

The challenge, of course, may be the “ick” factor, but if you’re new to insect cuisine, you might try eating some well-prepared selections at restaurants, instead of home-cooking. Grasshopper tacos at Toloache in New York City, for one, have been favorably reviewed for their tasty crunch, much like a well-crisped shrimp. There are a number of restaurants across the country on board with insects, so scout around and give them a try. Ant egg omelet, anyone?

Here, some of the more popular insects to sample:

The most commonly eaten beetles are the long-horned, june, dung and rhinoceros kinds. These are eaten by people living in the Amazon, parts of Africa and other heavily forested regions. Beetles have more protein than most other insects.

not only look nice, they are succulent, many concur, and full of protein and iron. They are most popular in African countries, where children and pregnant women may be deficient in these nutrients.

In Central and South America, fat and fleshy agave worms, which live between the leaves of the agave plant and turn into butterflies, are sought after, too.

On the other hand, indigenous people in Asia, Africa, Australia, South America and Mexico typically eat bees and wasps when they are in their immature stages.

Stingless bees are most commonly eaten, however. While still in egg, larval or pupal form—tucked away in hive cells—they can taste like peanuts or almonds. Wasps, meanwhile, have a pine-nutty flavor.

Ants are tasty, too. About 100 grams of red ant, which is one of thousands of ant species, provide roughly 14 grams of protein—that’s more than eggs—nearly 48 grams of calcium and a healthy dose of iron and other nutrients. Plus, they’re low in carbohydrates and have less than 100 calories.

They’re all over the place and therefore easy to catch. A source of protein, grasshoppers have a neutral flavor, which makes them ideal for a curry dish. Crickets, however, are great with a stir-fry.

Theses also have a place on your dinner plate. That’s because flies that develop on various types of cheese take on the flavor of their host, and the species from bodies of water may even taste like duck or fish.

Easy to cultivate and even easier to harvest, water boatmen and backswimmers deposit eggs on the stems of aquatic plants, in freshwater, saltwater and yes, even stagnant water. These eggs can be eaten fresh or dried and shaken from the plants in order to make Mexican caviar. It tastes like shrimp!

If you can get past the unpleasant smell, stinkbugs can add quite the apple flavor to sauces. In addition, they’re known to have both anesthetic and analgesic properties, providing a valuable source of iodine.

provide the same amount of protein, vitamins and minerals as many fish and meat. And here’s another bonus: The nutritional value of mealworms is unparalleled.

They’re rich in copper, sodium, potassium, iron, zinc and selenium. Mealworms are also comparable to beef in terms of the protein and healthy, polyunsaturated fats they provide.

So forget the bug spray and learn to love the insect world. It may not be long before you stomach the idea of biting into that delectable stinkbug!