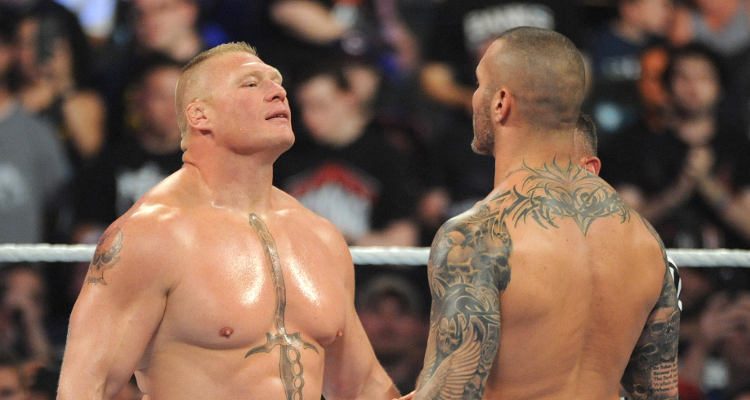 WWE star Brock Lesnar defeated 12-time World Champion Randy Orton by TKO (technical knockout) in the main event at WWE SummerSlam 2016 in August. Although the matchup wasn’t met with good reviews from critics or fans, the two stars had an untelevised, no disqualification rematch in Chicago on Saturday, Sept. 24.

Four-time World Champion Brock Lesnar eventually won this “everything goes” rematch and even got in a few illegal hits after the fight.

The 39-year-old wrestler is certainly no stranger to controversy. Lesnar is also a member of the UFC (Ultimate Fighting Championship) roster and was required to pass multiple USADA drug tests before his victory over Mark Hunt at UFC 200 in July.

The UFC has a rule that requires fighters to inform the company four months in advance when they are coming out of retirement so they can be placed back in the USADA testing pool. The UFC waived this rule for Lesnar, which drew controversy. Lesnar was tested eight times in four weeks before UFC 200. It was also reported that Lesnar tested positive for a banned substance in a June 28 drug test before the event.

The former UFC heavyweight champion was dominant in his fight against Hunt despite being away from UFC since 2011. Before his layoff from UFC, Lesnar suffered from diverticulitis, which is condition characterized by an inflamed colon and terrible digestive problems like bloating, gas, constipation, diarrhea, nausea, fever, chills, and belly pain in the lower abdomen.

Lesnar owns a 6-3 record in UFC, and is considered a freak athlete due to his lethal combination of size, endurance, and strength. The s6-foot-3, 286-pound Lesnar won the NCAA wrestling title and first became the UFC heavyweight champion in his fourth career fight against UFC legend Randy Couture. Lesnar is considered a top draw in both the UFC and WWE.

Brock Lesnar also has 20-inch biceps, a 54-inch chest, and a 38-inch waist. Needless to say, it is necessary for Lesnar to have an intense training and workout plan. Over the years, Lesnar has learned the meaning of hard work, and at a young age, he developed an unconventional training program to help shape his physique and form his strength and agility.

Lesnar’s workout plan now includes four exercise days with two training sessions each day. His morning sessions help hone his fighting and wrestling skills, while at night, Lesnar will work on his weight lifting and sports-specific conditioning. Wednesday, Saturday, and Sunday are usually rest days for Lesnar. The following is Lesnar’s training schedule and workouts:

MMA Workout: Before Lesnar lifts weights he performs wrestling and grappling training, along with ground and pound training or striking.

Tuesday (Back and Biceps): His back and biceps exercises include the preacher curl with the EZ bar, hammer curls, the incline-bench dumbbell curl, deadlift, barbell stiff-legged deadlift, cable seated rows, and wide-grip, medium-grip, and narrow-grip pull-ups.

It is also necessary for Brock Lesnar to eat a healthy diet. Lesnar not only focuses on his nutrition to build muscle and strength, but also to treat his diverticulitis condition. For instance, people with diverticulitis should consume a high-fiber and unprocessed diet that focuses on fruits, vegetables, and non-gluten grains like quinoa and brown rice. The person should also drink plenty of water to avoid constipation. A vegetable juice, water, or broth fast under medical supervision for one to two days can be helpful, as well.