Jennifer Lawrence has made a name for herself in Hollywood as one of the most talented actresses of her generation. Jennifer Lawrence, age 26, is the world’s highest paid actress for the second consecutive year, according to the latest Forbes ranking.

The Hunger Games and X-Men star tops the list for women, earning $46.0 million for her roles in The Hunger Games: Mockingjay – Part 2 and Passengers, which is a sci-fi flick expected to be released later this year. Lawrence must follow a specific diet and workout plan for many of her major movie roles.

It’s no secret that Lawrence’s daily eating plan could use some work. Lawrence loves her junk food. She has been seen scarfing down pizza at the Academy Awards, and she also enjoys eating French fries. 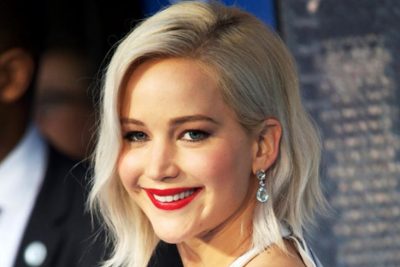 That being said, Lawrence changes her eating and lifestyle habits when preparing for a movie role. For instance, J-Law worked with trainer Dalton Wong in 2010 to get into shape for her role as Mystique in X-Men: First Class. Lawrence says Wong changed her body for the movie, but also gave her skills for life. Wong taught Lawrence how to eat, exercise, and live an overall healthy life.

Jennifer Lawrence’s weight is 138 pounds and she stands tall at five-foot-nine. In the past the starlet has said she doesn’t like exercise, but she will hit the gym when a movie studio insists she gets in shape for a role.

While filming X-Men: First Class, Lawrence trained over the course of 10 to 12 hours every day for a three-month period. Lawrence and Wong started the day with a 20- to 30-minute jog outside. It was the perfect way to get Lawrence moving, especially since she spent hours getting body painted as Mystique each day.

Throughout the day, Lawrence did short bursts of high-intensity interval training with core exercises and some stretching for 15 minutes at a time. A lot of people wanted Lawrence’s attention so an hour-long workout was difficult to do, but four 15-minute workouts equaled a good hour of exercise.

The following is an example of Lawrence’s abs and arms power-circuit workout with Wong:

Weighted push-up: Begin in the plank position with a weight in each hand. Next, lower your chest to the ground and press up. At the top of the push-up, pull your left elbow into a row and then push up again on the right side.

Sideways raise with pulse: With a weight in each hand, raise your arms to shoulder height while keeping your arms straight and shoulders pulled down. Pulse your hands an inch backwards three times, then lower and repeat.

Lawrence follows a specific daily eating plan that helps keep her healthy. For example, Lawrence focuses on portion control and counts her calories, but her goal is to be healthy, not slimmer. Although she sometimes eats burgers at fast-food restaurants, she stays away from high-calorie beverages like cola and juice. Instead, she drinks lots of water.

There is a reason Jennifer Lawrence is the world’s highest paid actress. She is willing to do whatever it takes for any role, and that includes following a particular diet or workout plan.