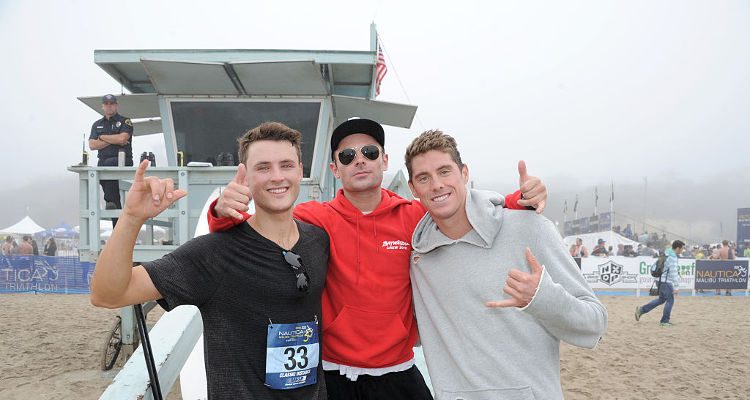 Did you know that sexy heartthrob Zac Efron has a super cute younger brother? He does, and his name is Dylan Efron. It’s not a surprise that these two are brothers, as they are both incredibly handsome and seem to have an affinity for working out and getting super toned. Dylan Efron is currently training for the Boston Marathon, and his preparation is quite impressive.

About two weeks ago, Dylan posted a photo of himself on Instagram running in the trails of San Luis Obispo, California. He appeared to be in some serious running gear—shoes, shorts, shades and a baseball cap.

Well, apparently running is not his only form of exercise. Dylan also prepared for the Iron Man Triathlon in Wisconsin, so he definitely rides his bike to stay fit as well. He seems to be quite athletic and enjoys intense training.

Zac Efron is super proud of his brother for qualifying for the Boston Marathon, and even congratulated him on social media. This is big news, because in order to qualify (this is one of the biggest marathons in the world), men who are aged 18–35 must complete a previous marathon in three hours and five minutes.

“That happy guy in the middle. That’s my BROSKI! Congrats on qualifying for Boston in the #ChicagoMarathon. You stud muffin” Zac Efron wrote in a photo of Dylan. It’s so sweet hearing about siblings supporting each other.

While the exact workout plan for Dylan Efron is unknown, it’s clear that he likes running and biking. He also seems to enjoy outdoor activities versus indoor gym activities. It’s not a stretch to assume that Dylan may also do warm up exercises or even stretching in order to prepare for both the marathons and triathlons he participates in. Judging by his Instagram posts and his hobbies, it could also be said that Dylan Efron attends to his fitness in fun and motivating ways.

It doesn’t appear that he’s into intense gym workouts, weight lifting, circuit training, or strength training like his brother Zac, although that is not confirmed. Dylan’s diet is also unknown, however, when training for marathons it is super important to keep a healthy diet that’s rich in vitamins, minerals, and protein to repair the body and feed it the nutrients it needs to build strength and stamina. Dylan might even refuel his muscles through a protein shake or bar, or maybe even with nutritional supplements.

The Efron brothers are pretty close, and they’ve been spotted at Lakers games together on several occasions, so it seems they share a love of basketball. They’ve also travelled on vacation to Hawaii together (back in 2010) and were photographed shirtless, showing off their amazing chiselled abs. It’s mostly Zac Efron that’s known for being super ripped, but don’t underestimate Dylan. The 24 year old’s definitely got enviable abs and a super fit body!