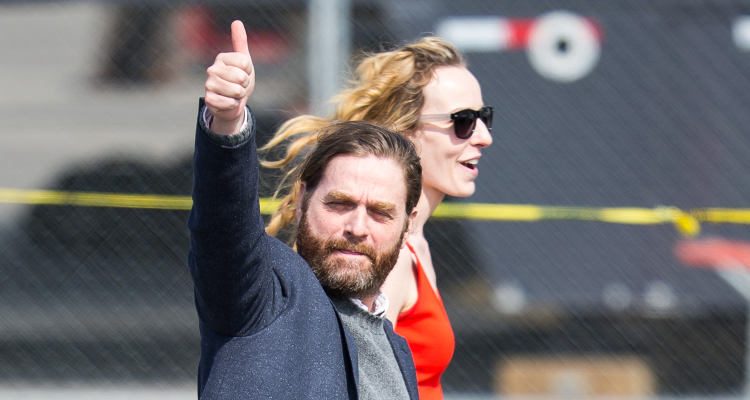 Between Two Ferns with Zach Galifianakis is an Emmy Award-winning talk show on the entertainment website, Funny or Die.

Comedian Zach Galifianakis has interviewed major stars and politicians in the 21 episodes since 2008, such as Justin Bieber, Brad Pitt, President Barack Obama, and most recently, Democratic presidential candidate Hillary Clinton. Over the show’s eight-year run, the 46-year-old has undergone a serious body transformation.

The Hangover trilogy star is also set to star in a couple of movies within the next month, including Masterminds and Keeping Up with the Joneses. The very busy Galifianakis also stars in the dark comedy FX series called Baskets and is known for his hilarious performances in Birdman (2014), The Campaign (2012), and Due Date (2010). Zach Galifianakis looks considerably thinner in his most recent movie roles. Throughout the year, the actor’s weight loss has also been on display at various awards events and several tabloid shots.

It turns out that an alcohol-free diet led to the actor’s 70-pound weight loss in 2012. Galifianakis would rethink his alcohol habit after a scary driving incident in New York. After he cut alcohol and beer from his diet, he also dropped much of his weight. He stopped his vodka with sausage habit, as well.

Zach Galifianakis, who is famous for his dark sense of humor, says he is lucky he could stop drinking and jokes that he can finally go up two flights of stairs now that he’s thinner. Although Galifianakis’ weight loss was an important health goal for the actor, he reportedly got so thin that he had to wear a prosthetic belly while filming The Hangover Part III for his classic role as the lovable and overweight Alan character. The hit movie series focuses on three friends picking up the pieces after a night of drinking.

Zach Galifianakis may have lost a lot of weight, but that’s where the transformation ends. He still owns his trademark scruffy beard and long hair look that has made him famous and lovable with all his TV and movie characters. For the 2014 premiere of Birdman, Zach Galifianakis surprised everyone after dropping between 50 to 60 pounds, but at the time he was fairly quiet on how he dropped his weight.

Eliminating sugar from his diet helped Galifianakis balance his blood sugar and insulin levels throughout his day. To replace his sweet tooth, he would instead consume grapes, bananas, blueberries, watermelon, and pineapple. He would also sweeten his coffee with agave syrup and raw honey. Galifianakis also ate lots of clean sources of lean protein to build muscle mass and increase metabolism.

Galifianakis used to eat lots of bacon and pancakes for breakfast, but now he reportedly starts his day with fresh grilled chicken breast, oatmeal, and fruit. Some lunch choices may include lentils, sweet potatoes, brown rice, and quinoa with a protein like ground turkey, egg whites, grass-fed beef, or boneless chicken breast. He also cuts his calories at dinner and is said to eat fresh fish with mango salsa or fresh garden salsa and egg white.