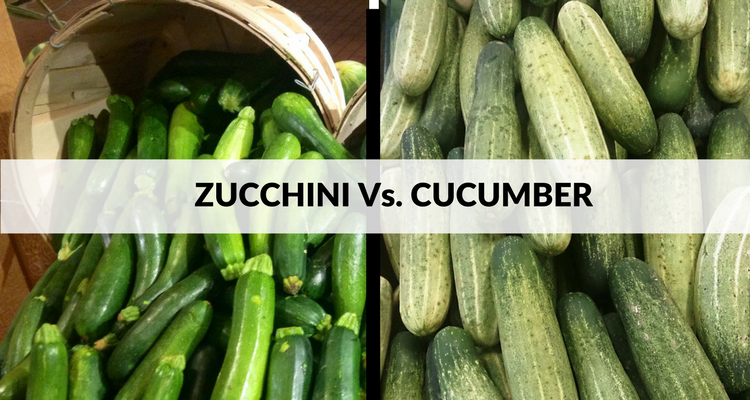 You should not peel cucumbers and zucchinis. The peels contain good amounts of fiber, minerals, and vitamins. Ensure that they are washed in running water and scrubbed to remove the dirt and residue.

A cup of cucumber contains four grams of carbohydrates and half a gram of dietary fiber. The fat content is almost negligible and amounts to 0.1 grams. The same serving contains around one gram of protein.

A cup of zucchini provides 27% of the recommended dietary allowance (RDA) of vitamin C for women and 24% of the RDA for men. On the other hand, cucumber provides less than five percent of the RDA of vitamin C. Vitamin C helps lower blood pressure and provides protection against inflammation and clogged arteries.

Zucchini provides six percent of the recommended dietary allowance of vitamin B6 while cucumber provides only three percent.

Zucchini and cucumber both contain some other essential vitamins and minerals such as manganese, riboflavin, potassium, folate, and vitamin K. Potassium reduces the risk of strokes and is a natural way to lower the blood pressure.

A study published in the Pakistan Journal of Nutrition states that cucumber seeds are a good source of minerals, and also contain calcium.

Zucchini seeds contain phytonutrients that help fight against inflammation and oxidative stress. The seeds are believed to have antimicrobial and antiparasitic properties. The skin contains the most antioxidants and so shouldn’t be discarded.

Cucumbers also have phytonutrients such as flavonoids, lignans, and triterpenes. Cucumbers have antioxidant, anticancer, and anti-inflammatory properties. The seeds and peels of cucumbers contain beta-carotene and fiber. They help enhance the skin and eye health and provide immunity.

Cucumber is used in cosmetic industry to prepare lotions, soaps, and other beauty products. According to an article in the journal Filoterapia, cucumbers prevent wrinkles and aging.

A cucumber contains 95% water. Zucchini is also hydrating and contains essential electrolytes and nutrients. The water and fiber content in both can help relieve constipation and boost digestive health.

Physical Difference between Cucumber and Zucchini

The physical similarity between a zucchini and cucumber makes it difficult for people to distinguish between the two. Both have the same dark green skin and pale and seedy flesh. And, both are long and cylindrical in shape.

Cucumbers have a waxy and bumpy exterior and feel cold to touch. Zucchinis have a dry and rough exterior. Some types of cucumbers have smooth skin, while some types of zucchini have yellow, orange, or mottled skin.

The seeds of a cucumber are narrow, long, and smooth. A zucchini has wide, short seeds with a central ridge.

The cucumber plant has a long, slender stem that trails or creeps on the ground or winds itself around a support such as tendrils or claspers. The zucchini plant doesn’t trail on the ground but grows upright. It has a bush-like stem.

Cucumber can be eaten raw or cooked. Zucchini tastes best when cooked. Upon cooking, the cucumber becomes wilted but remains crunchy. On the other hand, zucchini turns brown and tastes sweet.

When eaten raw, cucumbers taste crunchy, juicy, and cool. Small varieties of cucumber are pickled while zucchini can be stir-fried, roasted, steamed, or used to prepare soups.

Now you know the difference between zucchini vs. cucumber, make both a part of your diet to reap their benefits and stay healthy.