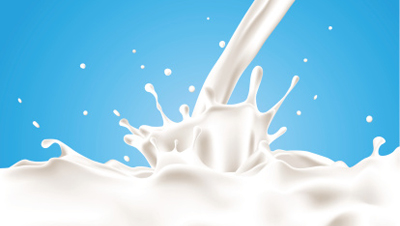 Next, came the first “Got Milk?” commercial which aired in 1993. It became the core focus of the milk campaigns because, at that point, everyone knew that milk contained calcium, which would give you strong bones, right? In the commercial, the main character could not wash down the peanut butter stuck in his mouth for the chance to win a $10,000 prize without drinking milk.

How can anyone forget the milk commercials and magazine ads flaunting every celebrity, athlete, and famous person with that white milk mustache?

For over 30 years, everyone has been telling you that you must drink milk and consume dairy as part of a balanced and complete diet, according to the U.S. Department of Agriculture’s Food Guide Pyramid. After all, the milk companies and government wouldn’t tell you to drink something your body didn’t need…or would it?

In 1991, the USDA’s Food Pyramid had suggested the consumption of less meat, milk, and sweets, and more fruits, vegetables, and other whole plant foods. The National Milk Producers Federation and the National Cattlemen’s Association thought Americans would consume less meat and dairy, which resulted in not much change. Today, the USDA recommends Americans consume three glasses of milk a day. Is it to support your health and wellness or because the milk industry is a multi-billion dollar business?

Five Reasons You Should Avoid Milk:

Health experts and nutritionists always explain that you should avoid processed foods in your diet to decrease the risk of disease. Well, milk is a processed food.

There isn’t a dairy cow at the grocery store, ready for you to pump it, so you know exactly where your milk came from.

Humans are the only species that drink another animal’s milk. Have you stopped to ask if this process was even natural? Mother’s milk is important for human babies but the composition of breast milk and cow’s milk is very different.

It contains an average of three times more protein than human milk. This can lead to metabolic disturbances in humans, including damaging bone health.

Isn’t milk known to protect against brittle bones? Scientific studies have found that humans barely absorb the calcium from cow’s milk and especially, if pasteurized, it increases the calcium loss in your bones.

Vitamin D is better than calcium to prevent bone fractures. What are better places to get calcium? Try to eat foods higher in calcium such as organic yogurt, sesame seeds, collard greens, and spinach.

Over consumption of dairy products and calcium could also boost the chance of prostate cancer by 30 to 50% in men. This is another reason why drinking milk could be detrimental to your health.

The pasteurization process from cow’s milk has many negative impacts, including the inactivation and destruction of enzymes, destruction of lactobacillus acidophilus bacteria, and the loss of vitamin B6.

Also, the destruction of immunoglobulins means any benefits drinking milk would have on your immune system are destroyed.

A better option from conventional pasteurized milk is organic milk. There are fewer additives and more nutrients and vitamins in organic milk.

There are up to 50% more vitamin E, 75% more beta carotene, 70% more omega-3 fatty acids, and two to three times more antioxidants. Also, cows in organic farms can roam the open pastures through part of the year and are always grass fed.

5. Many People Can’t Drink It

Milk is promoted as an essential part of a person’s diet but should it be? According to Dr. Mark Hyman, approximately 75% of the world’s population is genetically unable to properly digest milk and other dairy products.

This is because of lactose intolerance, which can cause abdominal pain, bloating, and diarrhea, after consumption.

Milk is also the most common food allergen plaguing the world today. Some reactions include skin rashes, eczema, and hyperactivity, among other issues. Chronic otitis media, infections in the ears, can also be a major problem with milk allergies.

Soy and almond milk have been popular milk alternatives for those with dairy allergies and intolerances but are they any better for you? The vitamins within non-dairy milks are synthetic, which provide limited health benefits. The additive carrageenan within these milks is considered a possible human carcinogen, which can cause inflammation and digestive stress.

The best option is to make your own milk such as almond milk. Combine one cup of almonds, four cups of water, and a sweetener (such as maple syrup), into your blender. When complete, use a strainer or a nut milk bag.

The next time you see a milk mustache, it’s best to hand that person a paper towel to wipe their face and inform them of the many health risks of drinking milk.