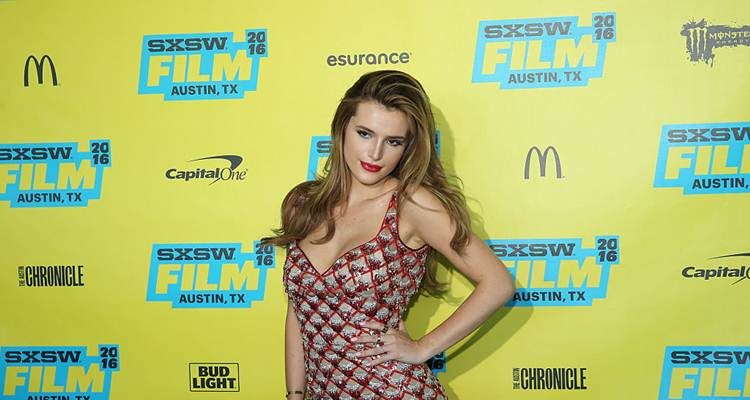 A lesson for all the boys out there: Don’t mess with Bella Thorne. After all, the young actress has a bad-ass fitness regimen. It was recently reported that Thorne, 19, and actor Tyler Posey, 25, officially called it quits. Shortly after that, Thorne posted a photo to Instagram of her toned abs and boxing workout with the caption indicating that she wasn’t doing very well, but loved getting her boxing on anyway.

Love getting our boxing on? feel like my bro!! But like I'm not very good and he's amazing soo… #mondaymotivation #mondaymorning

Thorne and Posey were caught on a date around Halloween; however, Hollywood Life reports they’ve broken up since then, and were even living together at the time for a month or two. Thorne allegedly moved out of Posey’s home after the couple broke up earlier this month.

The actress was dating actor Gregg Sulkin, 24, for over a year before breaking up in August and almost immediately started a relationship with Sulkin’s friend Posey, according to the celeb news site.

Unfortunately, Thorne appears to be torn up about the breakup, even though the relationship was brief. Thorne recently took to Twitter to post that she hates mornings when she has a certain someone on her mind. Presumably, she is talking about Posey.

I hate the mornings..that's when I think about you the most

Instead of focusing on the breakup, Bella Thorne can target her health with a healthy diet plan and fitness routine. Let’s take a look at how Bella Thorne will often workout and eat…

Bella Thorne really enjoys hitting the gym hard, and from time to time, she will share her progress on Instagram. Thorne builds lean muscle with aerobic condition.

Her workout is always an hour long while also making time for proper stretching after her exercise session. She works out seven days a week, and sometimes twice daily. Regular gym sessions have her looking more muscular and fit. Thorne’s exercises also include hot yoga, Pilates, and SoulCycle classes.

Thorne first eased her way into a workout routine. She started with a plank with a hip twist. Other days, she would target her waist, core, stomach, arms, and oblique muscles. Here is an Instagram video clip of her plank exercise below:

Gym day with my sister @dani_thorne today we targeted waist, stomach, core, obliques, and arms 🙂 this is a clip of one of our work outs ❤️ super easy to do at home also!

Thorne then kicked it up a notch by adding exercises that would target her calves and glutes:

Today we were targeting abs, Glutes, core strength, and Calves.. With a nice protein shake to finish the work out off right 🙂

She would also perform the “viper wood chop” to tone her arms and waist, and even more core work using a suspension band:

Today I did 4 sets of 15 reps of the "viper wood chop". I mixed this new exercise in with my circuit training. I am looking to build lean muscle with aerobic conditioning. My workout consists of an hour and I always make time for proper stretching before and after my workout. My focus this morning was to strengthen my core, tighten my waist and light shoulders.

I didn't work out for such a long time that now I have to re gain my core strength! This does core and abs ..mostly obliques .. For breakfast, I'm about to eat pure Greek yogurt & two hard boiled eggs!

What Does Bella Thorne Eat?

That being said, Thorne eats a healthy diet plan to complement her workout regimen. She drinks lots of water with watermelon, lemon, and orange. She also consumes protein foods after workouts. For instance, breakfast sometimes includes Greek yogurt with two hard-boiled eggs.

Actress Bella Thorne is best known for her TV roles in My Own Worst Enemy, Big Love, and the Disney Channel series Shake It Up. She has also had movie roles such as Blended (2014); Alexander and the Terrible, Horrible, No Good, Very Bad Day (2014); The Duff (2015); and TV movie Perfect High (2015).