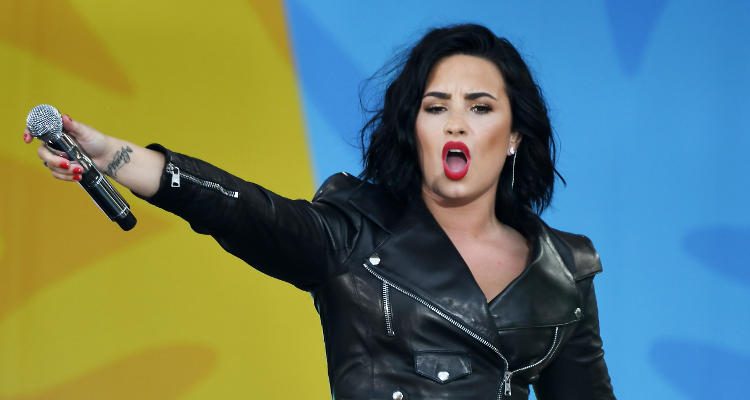 The “Body Say” singer currently has pictures of her circulating the internet that reveal her healthy body in a bright orange bikini. Lovato’s look could be attributed to her many boxing classes, along with the other workouts she’s been doing for her tour.

But Lovato wasn’t always as confident as her hit single would suggest. A few years back, the singer struggled with eating disorders, depression, self-harm, and bullying, which landed her in rehab to overcome her struggles—and overcome she did! Lovato is currently at the top of her game.

Her choice of live performance costumes have been quite revealing, as she’s being singing her famous songs in tight body suits that really show off her figure and killer legs! Art mimics real life, and she is now feeling more confident.

Lovato is the face of Skechers, and she practices what she preaches by not only promoting fitness shoes but by incorporating fitness into her life. The singer enjoys boxing, which she has posted videos of on her Instagram account.

Lovato also weightlifts! In one of her posts, you see the singer doing barbell squats.

All the extra hours in the gym were to prepare for her FutureNow tour—you need plenty of stamina to perform night after night in different stadiums to a sold out audience.

After her high-profile breakup with longtime boyfriend Wilmer Valderrama, Lovato bounced back with ease by picking up some boxing gloves instead of a tub of ice cream.

The singer has noted that hitting the gym has been the best remedy for dealing with her breakup. Immediately after the breakup, Lovato was posting not one, not two, but three workouts a day! That’s definitely one way to get over a guy.

But breakup aside, Lovato has been working on her fitness for the past few years, as she finds it provides her with numerous health benefits.

Being bipolar, Lovato regularly takes medication and attends therapy. She is now more focused than ever on being a role model for young girls and speaking up about mental illness.

Demi Lovato has come a long way since beginning her career as a child star. Although the path hasn’t always been easy, it’s good to see she has regained her confidence and is powering through.

She is looking better than ever, and all that time spent in the gym is really paying off. Whether she’s hitting a bag, or dropping it low in a squat, there is no doubt that Lovato is working hard to stay healthy and look and feel her best.