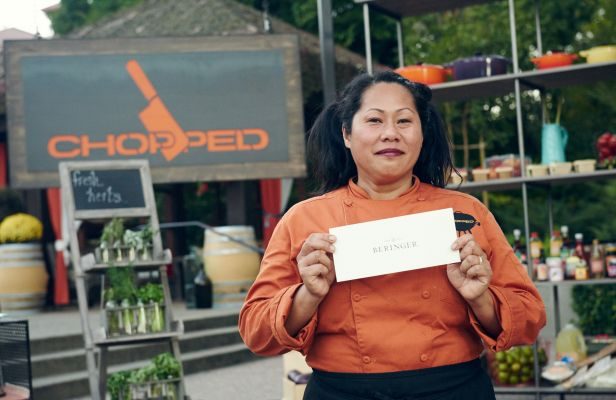 The Chopped Grill Masters Napa 2016 finale aired last night and viewers were treated to a tense battle as the four preliminary grillers battled it out for the final $50,000 cash prize.

Although all of the Chopped Grill Masters chefs were top grillers, only one could be crowned the winner. That accolade went to Sophina Uong, who beat out runner-up Daniel Sanchez in the dessert round for the title.

Curious how she did it? Read on!

The mystery basket for the first round contained pig’s head, smoked chocolate chips, homemade blue corn tortillas, and escarole. Sophina opted to turn the mixture into a pig’s head salad over grilled escarole, showing off some of the headstrong approach that saw her through the preliminaries.

Just like before, her intuition proved right as the judges loved her take on the food, but she couldn’t escape critique for having made too large a dish for what was supposed to be an appetizer. Still, she was able to proceed to the next round while Tony Maws, who showed a great talent for extracting extra flavors from his ingredients in the preliminaries, found himself chopped off and eliminated.

The mystery basket this time was a bit more traditional for a main course and consisted of porterhouse steak, candied garlic, artichokes, and razor clams. Although Sophina began the round as confident as ever, it seems luck had started to conspire against her. Her attempt at making a garlic sauce suffered a setback when the blender tipped over and further on she even dropped a pot filled with artichokes.

These trip-ups posed a serious threat to her momentum, but Sophina was able to recover and pull her meal together. The judges dug in to her steak and gave it high praise, but the issues with the sauce and artichokes resulted in too little of either for full marks.

The fact that even these early slips weren’t keeping Sophina down was definitely a sign of things to come. Meanwhile, the energetic Jonathan Sawyer found himself the weak link and ended up eliminated.

The mystery basket for the final match between Sophina Uong and Daniel Sanchez consisted of chocolate babka, aged goat cheese, Cabernet Sauvignon, and bananas. The presence of a baked ingredient threw Sophinia for a loop since she had struggled with them in the preliminaries, but she had made it this far and wasn’t going to let a babka stop her from taking the win.

Rather than try to work with the babka in its normal form, Sophina bent the ingredient to her will and turned it into brownies instead while using the goat cheese as the binding agent. The judges were thrilled by this novel take, though they noted that the flavor of the cheese had gotten lost in the process. When it came time to decide the winner, Sophina’s performance was undeniable.

As the Chopped Grill Masters Napa winner for 2016, Sophina Uong went away with the $50,000 grand prize. Runner-up Daniel Sanchez didn’t get anything for coming in second, but he and the other preliminary winners still get to enjoy the $10,000 they won earlier. When asked about what plans she had for the money, Sophina answered simply and direct: book some tickets, and reserve a place for her wedding.