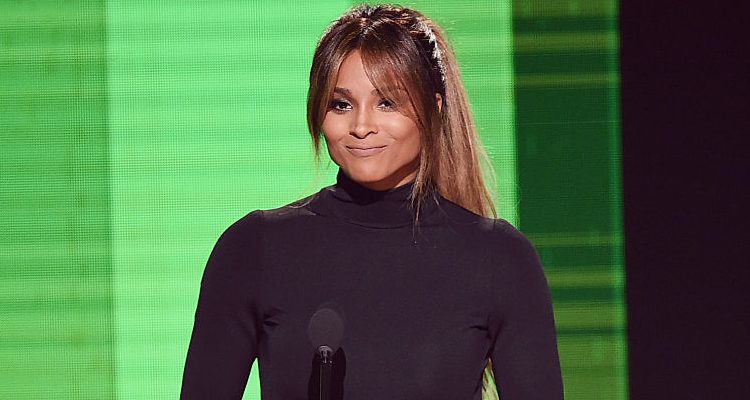 Are Ciara and hubby Russell Wilson having twins? Ciara may have revealed what she will be having during her pregnancy by posting a picture of some baby-sized sneakers and captioning it with “Our new little ones…” Notice the “s” at the end of “one”?

Prior to the singer’s baby-bump being revealed, Ciara showed off her sexy dancing for the LOVE magazine advent calendar. Ciara was seen in a sheer, fitted bodysuit that didn’t leave much to the imagination. Although she may be now steering clear form the tight bodysuits, we’re sure that Ciara will still maintain a toned figure even throughout her pregnancy.

Ciara works out alongside celebrity trainer Gunnar Peterson in order to maintain her enviable figure. To achieve weight loss, the singer/actress has been known to embark on a detox diet along with completing abs workouts.

Ciara’s approach to food is to eat things that nourish as she does not believe in starving herself. One of her favorite foods is actually whole wheat pasta. On the other hand, Ciara has been known to try the detox diet—the Cayenne pepper diet—which involves limiting fatty foods and relying heavily on liquids. Ciara has only done this once, back in her earlier days, so you won’t see her embarking on such a diet moving forward.

Ciara sticks with three meals a day, and if she is still hungry before bed she will enjoy a protein smoothie to suppress her appetite. An example of a typical day of eating for Ciara includes an egg white omelet with spinach and turkey or whole grain pancakes with egg whites; lunch may be a baked potato with steak and broccoli; and dinner may involve vegetable soup, grilled salmon, and steamed brown rice. As a snack Ciara may have fruits, veggies, yogurt, or a small turkey sandwich.

When the singer is gearing up for a stage performance, she will cut back on fatty foods so that she can look her best in fitted outfits.

Ciara hits the gym about five to six times a week, and her workout includes cardio exercises, weightlifting, and plyometrics. Working with Peterson has helped Ciara achieve her chiseled physique as well as allowed her to become very strong—she is known to be able to lift heavy amounts of weight.

Her abs workouts tend to be pretty intense, too. Ciara is known to complete 500 reps of various ab exercises in one session, which is why she has an amazing six pack. Even on a slow day, she will still manage to complete at least 200.

Ciara has always been dedicated to her workouts, so she will probably stick with them—with modifications, of course—throughout her pregnancy. This will make it far easier for the singer to regain her pre-baby body back once the “twins” are born.