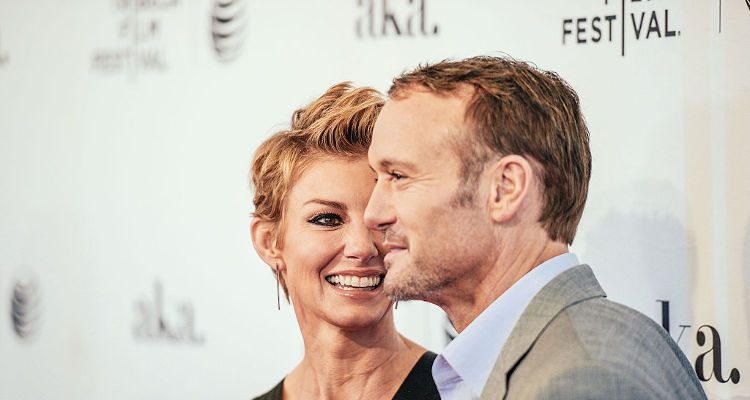 Faith Hill and Tim McGraw are preparing for their Soul2Soul tour, so Hill is keeping a close eye on McGraw’s health. McGraw has embarked on an intense workout regimen that has made him leaner, but Hill is ensuring that he’s not overdoing it.

It seems that Hill prefers husband McGraw to be a bit thicker, but his long hours in the gym are leaning him right out. It’s been suggested that McGraw works out for two to three hours a day. The good news is that Hill is a great cook, according to McGraw, so even though he’s out burning off those calories, she ensures that he’s taking them back in with the food she makes. On the other hand, Hill herself is in great shape; so it’s unlikely that she’s trying to fatten him up with indulgent foods.

The two were set to receive stars on the Music City Walk of Fame in Nashville on Oct. 5 – just before their 20th wedding anniversary.

The country singer has gone from beer belly to six-pack abs by following the Paleo diet and embarking on CrossFit workouts. McGraw first began his transformation six years ago. Since then, he has lost 40 pounds thanks to his diet and vigorous workout regimen. The singer has been known to hit the gym three times a day when not on tour, which includes after breakfast, before lunch and before dinner.

People magazine reported on McGraw’s workouts, which look something like this: Morning: Cardio or sports like basketball. Early Afternoon: CrossFit with more cardio. Late Afternoon: Weights or plyometric training.

McGraw’s workouts are designed by martial arts expert Roger Yun. Their partnership began when McGraw needed help prepping for an upcoming tour at the time, and the two have stuck together ever since.

As for his diet, McGraw follows a near-Paleo regimen, which means it’s pretty close to full-on Paleo with a few modifications. The Paleo diet is a type of eating similar to our cavemen ancestors from thousands of years ago. It is based on a hunter-gatherer approach, and the basic principles include no processed foods, no sugar, and no grains. However, McGraw does incorporate gluten-free grains into his diet.

McGraw’s diet is also low carb, and there is a large focus on fruits and vegetables and grass-fed animal meat. Furthermore, McGraw has given up drinking, which he credits for his six-packs abs.

With a combination of a clean diet and CrossFit, it is no wonder that Tim McGraw has managed to transform his body to look the best he ever has. Although completing three workouts a day may not be possible for many of us, McGraw’s story does reveal one of dedication and motivation – and frankly, that’s all you need to make any change. As long as he doesn’t overdo it, we’re sure wife Faith Hill doesn’t mind the transformation either.