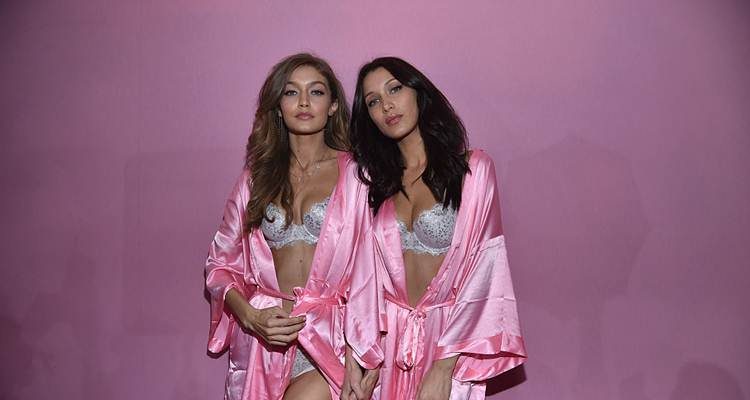 Victoria’s Secret Fashion Show 2016 was Grand Palais in Paris, France on Wednesday, Nov. 30. Kendall Jenner, Bella Hadid, and Gigi Hadid all looked absolutely stunning while getting ready for the fashion show at Victoria’s Secret backstage area, hours before walking down the catwalk.

Some of the supermodels were snapping selfies backstage, and showed off their beautiful looks before walking the runway.

Kendall Jenner, 21, was all smiles as she was getting her hair and makeup done. Fellow model Bella Hadid, 20, flashed her cleavage in her white Victoria’s Secret lingerie and pink satin robe.

Bella Hadid is also thrilled to get the opportunity to participate in the Victoria’s Secret Fashion Show with her sister Gigi Hadid. Here is a photo of Gigi and Bella Hadid running through the streets of Paris.

Bella Hadid says her mom, Yolanda Hadid, a former model, has given her advice before the big fashion show. It is Bella Hadid’s first Victoria’s Secret Fashion Show, while it is the second year Gigi Hadid and Kendall Jenner have both participated in the annual event.

That being said, it takes a lot of hard work for the three supermodels to look that beautiful, and they do it through a strict diet and workout routine. Let’s briefly review what the models do to get ready for the big Victoria’s Secret Fashion Show.

Gigi Hadid has some of the best abs in the modeling business. The 21-year-old Victoria’s Secret model has been training with Rob Piela for over two and a half years. Piela is the owner of Gotham Gym and Gotham G-Box in New York City.

She avoids sugar, make a lot of her own meals, and drinks freshly squeezed juices. Gigi Hadid will eat clean to stay fit, but also eata a burger once in a while to stay sane. One of Hadid’s favorite cheat meals is a burger and fries.

Kendall Jenner begins her morning with some detox tea, which removes waste from her body. Jenner says she drinks up to 12 cups of detox tea daily. Jenner also follows a high-protein and low-carb Paleo diet that includes lean proteins like round steak, top sirloin, and ground beef. She also avoids junk food most of the time, and prefers apples and strawberries for her fruit choices. However, at the same time, Jenner loves her cheat days and has ice cream, spaghetti Bolognese, and pizza.

Gigi Hadid’s sister Bella Hadid also follows a strict diet and fitness routine to maintain her gorgeous supermodel figure. Bella Hadid, like her sister, is blessed with good genes, so she believes she can eat whatever she wants.

Her body does not react well to wheat, dairy, and junk foods, so she isn’t able to follow her unhealthy eating habits for too long before she has to switch back to healthy eating.

She loves to eat pizza, burgers, grilled cheese, French fries, and diet Coke. But, before a fashion show, Hadid will have avocado toast and vegetable soup. She also enjoys green juices once a week.

However, Bella Hadid puts in the time at the gym to make up for her unhealthy diet. The supermodel enjoys running, yoga, Pilates, and walking around New York City. Hadid gets self-conscious with a trainer, so she will often workout alone, and her routine is not set. For instance, sometimes Bella Hadid will do cardio exercises for 15 minutes, but may also enjoy horseback riding.

Bella Hadid, Gigi Hadid, and Kendall Jenner are all supermodels that must exercise and diet to maintain their beauty. Although sometimes they cheat on their diets, they also understand that walking down the runway is hard work that just doesn’t happen overnight.