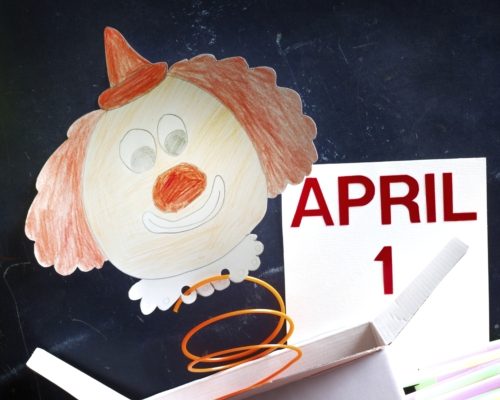 April Fools’ Day is a time when friends and coworkers prank each other and news outlets try to slip the occasional fake story past their readers.

Since there is already enough confusion about nutrition and food under normal circumstances, April Fools’ can also be a time to look back at some of the more entertaining and novel food hoaxes of the past. Read, smile, but remember—if you were there, you might have fallen for them too.

The BBC vs. the Spaghetti Weevil

On April 1, 1957, the British Broadcasting Company’s news show, Panorama, ended its Monday broadcast with a “special report from the Swiss Alps.” What followed was a three-minute segment describing how the mild winter and early spring weather was producing “an exceptionally heavy spaghetti crop.” Footage was shown of traditionally garbed women plucking strands of spaghetti from trees and placing them in brimming wicker baskets and later laying the noodles out in the sun to dry. Viewers were assured that Switzerland’s spaghetti enterprise was more of a family affair compared to “the tremendous scale of the Italian industry” with its “vast spaghetti plantations in the Po valley.” The bumper crop was also credited to the virtual disappearance of the spaghetti weevil, a pest that had given spaghetti farmers much concern in the past.

Part of the reason why this fake story caught on is because spaghetti was not very popular in Britain at the time and most people—if they thought about it at all—considered the dish to be some exotic foreign meal they had only a passing awareness of. It also helped that this was one of the first times television had been used to pull off an April Fools’ Day hoax, so people were not as prepared for the possibility.

The BBC was inundated with calls by viewers either congratulating them on such a fine joke or by frustrated couples wanting official verification that the story was or was not a prank. Even after airing a confession, the network continued to receive calls inquiring about how one might grow their own spaghetti tree. Eventually, a standard reply was developed by the phone operators: “Place a sprig of spaghetti in a tin of tomato sauce and hope for the best.”

On April 1, 1996, Taco Bell ran a full-page ad in six major newspapers including The New York Times and The Washington Post announcing that, in an effort to reduce the national debt, the company had purchased the Liberty Bell. The historical artifact was to be renamed the “Taco Liberty Bell,” however the ad assured readers it would still remain accessible to the public. Taco Bell also issued a press release comparing the move to corporate highway adoption and elaborated that the Liberty Bell would still be found at Philadelphia when it was not residing at the company’s Irvine headquarters. There was also a bit of self-congratulation about having acquired “the crown jewel of bells.”

As tends to happen in situations like this, both Taco Bell and the National Park Service in Philadelphia were swarmed with callers either applauding the hoax, angrily denouncing it in poor taste, responding with serious outrage over the selling of the bell, or seeking verification that the sale was or was not true. Some tried to contact the White House to know if the U.S. government was really selling off national treasures. Press secretary Mike McCurry responded to inquiries by joining in on the joke: “We’ll be doing a series of these. Ford Motor Co. is joining today in an effort to refurbish the Lincoln Memorial. It will be the Lincoln Mercury Memorial.”

The Swiss Love Their Cats…with Wine and Garlic

Although the BBC was responsible for one of the more renowned April Fools’ Day hoaxes, that doesn’t mean they can’t still fall for fakery elsewhere during the year. In November of 2014, the BBC, along with several other networks, breathlessly reported that animal rights groups were petitioning the Swiss parliament to stop citizens from eating their cats and dogs. According to the press release the news groups cited, about three percent of the Swiss population (around half a million) secretly ate cat and/or dog meat. Cats were cited as part of “traditional Christmas menus” and were cooked with wine or garlic, similar to rabbit. Dogs were mostly made into sausages or their fat was taken to treat rheumatism.

The press release was a hoax generated by a Swiss animal rights group called SOS-Chats Noiraigue. Although cat eating was once part of rural Swiss tradition—as it was in other parts of Europe—the practice died off long ago just as it did elsewhere on the continent. When questioned, SOS-Chats could not produce the source of their statistics and this inability to support their claims, along with official responses like the Swiss ambassador writing a refutation to The Dominion Post, led to the realization that it was all made up.

Just a Twist to the Left

Although not quite on the scale as the Taco Bell prank, Burger King made its own April Fools’ Day hoax attempt in 1998. On April 1, the chain announced a new Whopper as “the launch of its latest salvo in the battle of the Burger Wars.” Burger King assured readers that the redesigned Whopper would contain all of the familiar ingredients—just rotated 180 degrees, “thereby redistributing the weight of the sandwich.” Additional kudos were included in the press release by “The Left Handed Club” who were delighted that Burger King was recognizing the holding of a hamburger “has a natural right bias to it.”

Naturally, Burger King received thousands of requests for the “new” item by people who did not realize the implications of an inherently round sandwich. Some adamant (or cheeky) individuals also specifically requested the right-handed version.