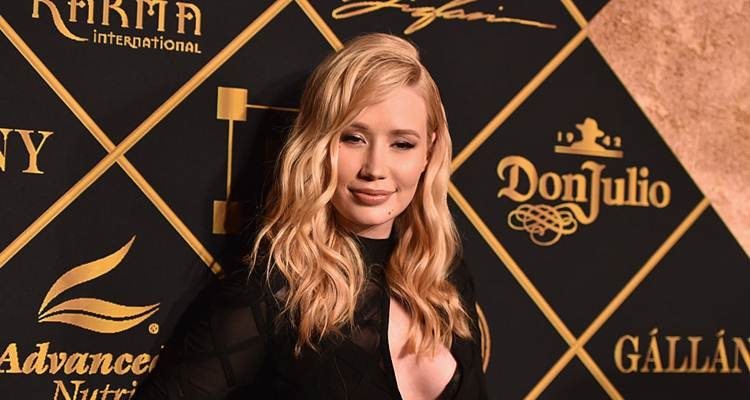 Australian rapper and singer Iggy Azalea is certainly taking the attention away from the men at the 2016 GQ Men of the Year Awards ceremony in Sydney, Australia on Wednesday, November 16.

The 26-year-old X Factor Australia judge showed off her toned stomach and ample cleavage in her black blazer that tactically covered her nipples. She showed off her bare torso and chest with multiple necklaces.

Others who made appearances at the event included Australian bikini designers, Natasha Oakley and Devin Brugman. They both made a statement at the event as they wore very plunging gowns of their own. Others at the event were Scott Eastwood, Chris Evans, and Jai Courtney, who was accompanied by his girlfriend Mecki Dent.

It was quite the event with many in attendance. However, no one turned heads quite like Iggy Azalea. She walked down the red carpet in her eye-catching black blazer. Later she gave a cheeky acceptance speech while picking up her prize for Woman Of The Year at the GQ Awards.

Other winners at the GQ Men of the Year Awards included actors Joel Edgerton, Jon Hamm, and Chris Hemsworth, who took home the Man Of The Year.

What Is Iggy Azalea’s Workout Routine?

You don’t show off a fabulous hourglass figure unless you have a great workout routine, and Iggy Azalea does! Nick Young’s ex-fiancée is the type of person to live each day to the fullest. Azalea takes good care of her body with regular workouts. She also treats dancing as a regular workout when she is on tour and cannot get to the gym. The five-foot, 10-inch tall blonde bombshell has also loved playing sports since childhood, especially tennis.

Iggy Azalea’s workouts involve squats, cardio exercises, and lunges. Azalea is a big believer that you should share activities they enjoy with other around them. That is why she works out with friends, which challenges her a bit. A friend challenged her to a “30 days of squats” routine, and it was a challenge that Iggy Azalea readily accepted. She says she likes when friends challenge each other to push limits during joint workout sessions, and she encourages others to do the same.

Needless to say, Iggy Azalea also follows a healthy diet with nutritious foods. Azalea has a well-balanced diet plan, and she is very careful with her calorie intake on the days she works outs. This may include drinking a couple of smoothies before her workout sessions.

Iggy Azalea is a big fan of superfood smoothies. For example, her breakfast smoothie will include kale, almonds, bananas, goji berries, and a variety of other organic fruits and whole food ingredients. That energy drink keeps the hip-hop star going all day long. That being said, Azalea will sometimes indulge in fast food.

Iggy Azalea first earned public recognition after she released YouTube music videos for the songs “Two Times” and “Pu$$y.” She later signed a record contract with T.I.s; imprint Grand Hustle Records in 2012 after she released her debut mix-tape Ignorant Art.

Iggy Azalea also made headlines after her messy breakup with NBA player and Los Angeles Lakers’ shooting guard/small forward Nick Young, a.k.a. Swaggy P. The couple ended the relationship in June after a video surfaced of Young bragging about a hookup with a girl he met at a club.