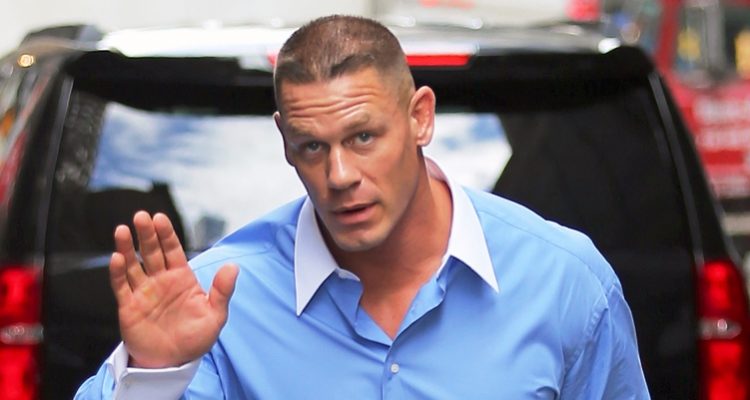 The 40-year-old has a reputation for an exceptional diet and workout routine. As a result, he’s been credited as the face of WWE since 2004. Let’s take a look at his weight, height and body measurements as of 2017.

John Cena didn’t always have his distinctive arms and muscular build. In high school, he weighed just 120 pounds! Fast forward to the age of 18, and Cena gained weight and muscle mass from vigorous gym workouts.

He later gained a reputation from bodybuilding competitions before entering the WWE as a professional wrestler.

John Cena’s popularity has also led to success as an actor. When the WWE superstar is not winning in the wrestling ring, Cena has appeared in films such as The Marine, 12 Rounds, Sisters, and Trainwreck.

John Cena spends regular time in the gym to get his arms and entire body strong enough for the wrestling ring. The 6’1, 251-pound wrestler works out with longtime friend and trainer Rob MacIntyre.

Cena focuses on a workout that allows him to keep his trademark muscular aesthetic, while also improving his athleticism and resistance to injury.

It is never a good idea to jump into a heavy weightlifting routine. Cena puts a lot of emphasis on his warm-up and flexibility. He starts light to activate the muscles. Every day the wrestler works on a different body part or group of body parts.

It is important note that one can’t look like a WWE superstar without the proper diet. John Cena understands that his diet and workout are both necessary to get his wrestler body. Nutrient-rich green vegetables are often on the menu.

What else does John Cena eat in a typical day? Breakfast includes two whole eggs, six egg whites, and oatmeal with raisins and applesauce. He also devours a protein bar after breakfast and after his morning workout.

He will then eat a very large lunch with two chicken breasts, vegetables, and brown rice. His afternoon snack is whole wheat bread with tuna and a protein shake with a banana.

Cena’s dinner includes pasta or brown rice with salad, vegetables, and fish and chicken. After dinner, he supplements with a casein protein shake and low-fat cottage cheese.

John Cena has had a lot of success in the WWE universe, and his intense diet and exercise plans are the reason for it. After all, big muscular arms and a bodybuilder physique take a lot of hard work.