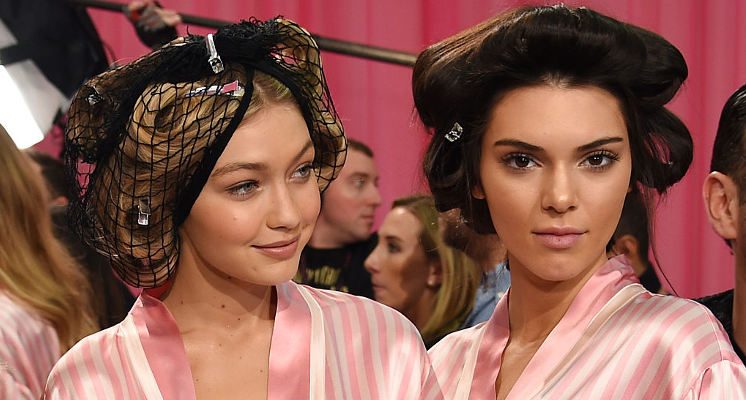 It’s official: we’ve taken over the Grand Palais. @kendalljenner in the #VSFashionShow wrap! Get yours via profile link.

Gigi Hadid looked stunning in a very sexy one-piece outfit with crisscross straps running through it, along with lace-up thigh-high boots, and a giant pair of feathered wings on her back. Kendall Jenner’s skimpy outfit left little to the imagination, and her shoes even had wings as she walked down a sparkly purple catwalk. Jenner wore a white and black outfit that had a sexy maid feel to it, while showing off black fluffy wings.

What is Kendall Jenner’s Healthy Diet and Workout?

Kendall Jenner is a successful supermodel that is a hot commodity these days, and besides the Victoria’s Secret Fashion Show, Jenner has impressed at other fashion weeks around the world, including New York, London, and Milan. She is also associated with popular designers like Chanel and Vera Wang.

Although Jenner seems to be skinny, she maintains her health with a well-balanced low-carb diet that has lean proteins. Jenner follows a low-carb Paleo diet that includes lots of lean proteins like top sirloin, round steak, and ground beef. She also keeps her energy up by snacking on plenty of raw vegetables throughout her day. Strawberries and apples are also her preferred fruit choices. She also avoids junk food at all cost. Kendall Jenner starts her day with a cup of detox tea. It helps remove wastes from her body to keep her healthy. She consumes about 12 cups of detox tea daily.

Jenner also admittedly enjoys cardio exercises like running. She believes in getting lots of sleep. She says she can’t function without seven or eight hours of sleep each day. Sleep helps Jenner relax while giving her energy for strenuous fashion shows like the annual one Victoria’s Secret puts on.

How Does Gigi Hadid Get into Supermodel Shape?

Rob Piela is a New York City-based trainer and owner of Gotham Gym and Gotham G-Box. He has also been training Hadid for about two and a half years. Hadid’s exercise routine includes an abs workout, and she will also hit the boxing ring around four times per week. Hadid performs planks, leg raises, and crunches to help develop her lower abdominal muscles.

Do you want to be a Victoria’s Secret Fashion Show model like Gigi Hadid and Kendall Jenner? Just know that it takes more than a set of wings and the pink satin robe or other skimpy lingerie. It takes a lot of hard work.