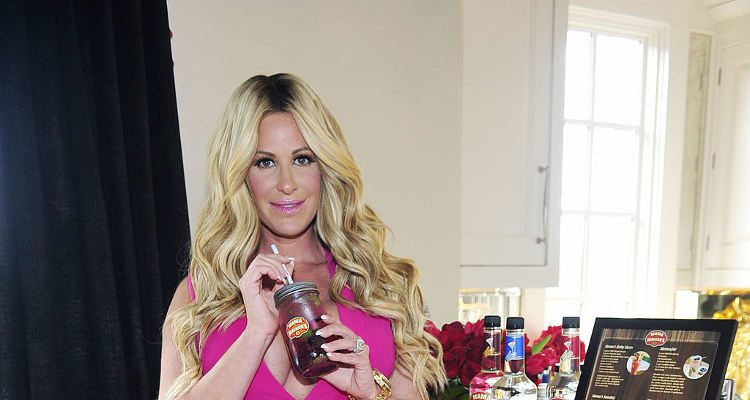 The Real Housewives of Atlanta alum Kim Zolciak has come a long way since her mini stroke, which she experienced while she was on Dancing with the Stars. The reality star took to Instagram to reveal her four-mile run cardio workout, which was quite the feat as she explained her fear of completing cardio prior to performing a stress test back in May. During that stress test Zolciak realized that she could get hit the ground running again, supposing that if she didn’t “drop dead” in front of her doctors, then she would be OK to go ahead and run on her own.

4 miles tonight I ran!! It wasn't until I had to do a stress test back In May that I felt comfortable running again since the device was put in my heart. Little did I know that stress test would heal (as much as it could) the fear I had of exerting myself (my heart rate) my cardiologist stood there (my medical team at Emory are the best) so there I was walking, then slow running, then running and I figured wellllll shit if I'm going to drop dead my cardiologist is right here what do I have to lose ? since that day I have slowly built myself up to running pretty consistently without stopping! I ALWAYS knew something was wrong w/ my heart my friends could go and go and I always had to stop for breaks (even back in Elementary school) I just feel so grateful to be able to continuously run! I'm so thankful for my girls who drove the golf cart behind me from the beginning just in case I had a problem! I love them so much! Heart health is so important (mine was genetic) GET YOUR ASS UP AND LETS GO YOU GUYS NEW YEAR NEW YOU! You have to start somewhere!!!

She suggested that she slowly began to improve her running, going from walking/running intervals to straight running with no breaks. She ended her Instagram caption with, “I’m so thankful for my girls who drove the golf cart behind me from the beginning just in case I had a problem! I love them so much! Heart health is so important (mine was genetic) GET YOUR A** UP AND LETS GO YOU GUYS NEW YEAR NEW YOU! You have to start somewhere!!!”

Zolciak has made great progress in her fitness journey, and after her health scare, she is more determined than ever to be as fit as possible.

How Kim Zolciak Got Her Bikini Body

Zolciak recently showed off her fit figure and toned bottom on Snapchat as she stood in front of a mirror in some lingerie. The mother of six was looking better than ever and she revealed her secrets in an interview with E! News last May. She had this to say about her fitness regime: “I think getting ready for bikini season is water. No matter what you really eat, if you hydrate, and drink lots and lots of water, everything’s flushing out your system.” Therefore, if you want to begin working on your bikini body like Zolciak then you better keep yourself well hydrated.

But water alone isn’t what got Zolciak her killer body. She always spends plenty of time working out along with being a busy mother. She admitted that she is always on the go chasing around her kids. “And plus, I don’t eat red meat, which I don’t think a lot of people know. I just don’t like it. I didn’t grow up on it. I just don’t like it. There’s no other reason. I do eat chicken and poultry, I think that probably helps. And wine, honey. Wine definitely helps. Wine every meal is my remedy.”

Another aspect about Zolciak is that she loves her curves and she is in no way trying to become bone-thin. She continued, “I’m a little curvaceous, per say. I think having a little meat on your bones is good. As long as you’re comfortable in your own skin, it’s great. If you’re a little thicker, but your skin is fresh and soft and toned, I think that’s amazing.”

Therefore, the takeaways from Kim Zolciak’s healthy living and fitness routine are: stay well hydrated, cardio is the key, and cut back on red meat – pretty simple, huh?