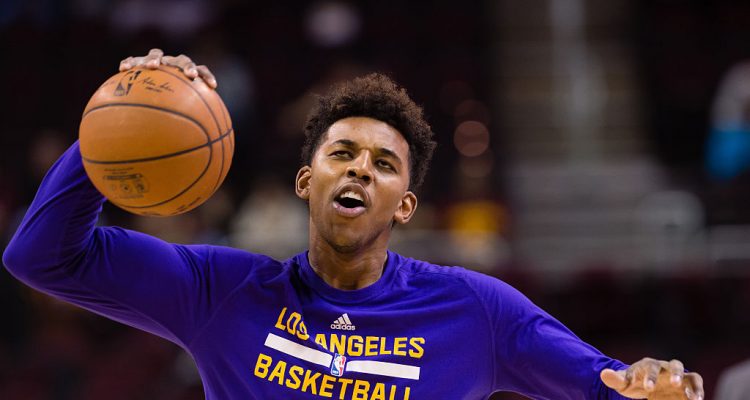 Los Angeles Lakers’ shooting guard/small forward Nick Young, aka Swaggy P, is ready to focus on reviving his NBA career after the rocky ending of his engagement to ex-girlfriend Iggy Azalea. The 31-year-old has since moved on with new girlfriend and singer Paloma Ford, who coincidently resembles Iggy Azalea.

Nick Young’s life was turned upside down at the end of last season when Lakers’ teammate D’Angelo Russell recorded Young bragging about hooking up with a 19-year-old girl he met at a club. The video was later leaked, and Iggy Azalea and Nick Young would later call off their engagement. Young’s life was turned into a negative tabloid for all to see.

Young’s relationship trouble with Azalea eventually affected his basketball game, and he was sent to the bench near the end of the season by former Lakers’ coach Byron Scott. The offseason also led to rumors that Young would be traded, including one that he would be sent to the Denver Nuggets in return for Kenneth Faried. If he could not be traded, the Lakers would release Young, along with the two years and $11 million remaining on his contract.

Young has apparently picked up the pieces, and has found his way into the bench rotation. Young has played nearly 20 minutes per game in the preseason. He has also received high praise from new Lakers’ coach Luke Walton. Walton says that Young is considered a scoring threat with defensive skills. He has also improved his rebounding and passing.

It seems that the tension between Young and Russell has eased to the point where it seems that the Lakers have decided not to trade the embattled NBA player. Young credits his new coach for his turnaround. Basically, Walton has focused on defense while allowing Young flexibility to do what he wants on offense. This has built his overall confidence.

Young has certainly had to put time in the gym with his fitness training in order to revive his NBA career. In the past, Young has also spent the offseason working on drills and dunks with Indiana Pacers’ forward Paul George. Two seasons ago, Lakers’ strength and conditioning coach Tim DiFrancesco would also tweet Young’s weightlifting exercises:

Ex-girlfriend Iggy Azalea has also managed to pick up the pieces since the breakup with Young. She is living in Los Angeles while getting ready to release her new album Digital Distortion in January. Azalea is also rumored to be dating rapper French Montana. In the end, it looks like Young and Azalea are in a better place despite their rocky breakup.