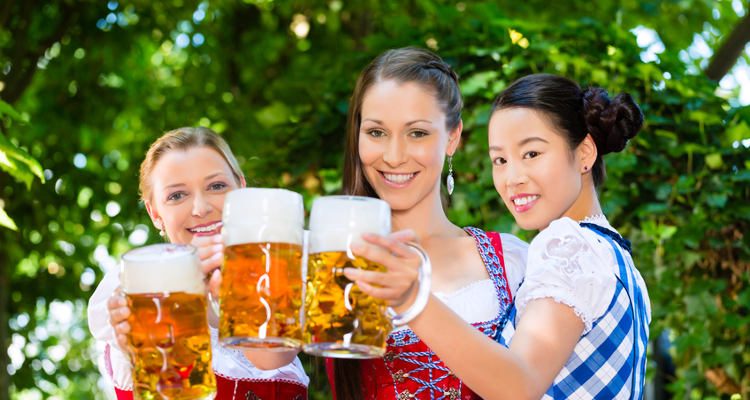 Oktoberfest 2016 is just around the corner, and events are popping up all over the world in places like Hawaii, Los Angeles, Brisbane, Dublin, New York, Denver, and London. If you’re interested in what Oktoberfest offers—a delicious food menu, for one—read on to see what’s in store for you this year.

Is your mouth watering yet? To make the deal even sweeter, Gannon’s is offering a Kama’āina discount of 30% off all dinner items with a valid Hawaii ID.

In Los Angeles, the large Oktoberfest festival is the place to be, and you can currently buy tickets for it. Special events will run from September 9 all the way to October 29. There will be music and dancing and, of course, German food.

Make sure to check out the web site and get your tickets fast, as they are expected to sell out!

The Dublin Oktoberfest festivities started on September 15 and will run until October 2. The 18-day festival includes German staples like pretzels and beer, along with other fun activities including fairgrounds with music and entertainment, along with traditional German outfits.

Did you know the traditional garment for women is known as a Dirndl? If the ribbons are tied to the right, it means a woman is married, to the left, she is single if the ribbon is in the center, it means that she’s a virgin.

If you live down under, you can celebrate Oktoberfest in Brisbane, Australia. With traditional festivities including traditional clothing, food, beer, and entertainment, Brisbane Oktoberfest is looking like one heck of a party. Furthermore, proceeds of the festivities go straight to the community for Youngcare Australia, which is the charity that the festival helps fund.

There is something to do for the whole family, so get your tickets now and enjoy the upcoming events. Menu items this year come from the German Sausage Hut, German Potato Hut, Haxen Haus, K&K Schnitzel & Burger Haus, King of Cakes, the Organic Cotton Candy Company, and German Hut Biergarten Imbiss, who have partnered up with the organizers to provide you with only the best Oktoberfest-inspired food items.

For three weekends, beginning in September, you can celebrate Oktoberfest in New York City. The festival promises to offer fun for the whole family, and promises to provide New Yorkers with a real German experience.

Aside from the obvious beer drinking, this year organizers promise to offer a truly German experience with live music, amazing food, games, and decorations to really make you feel like you’re in Munich.

If you’re in Denver, make sure to check out their Oktoberfest festivities which include a dog show, a bratwurst eating competition, happy hour drink specials, keg bowling, and much more!

The party starts Friday September 23 and ends Sunday October 2nds so you still have this weekend to check out the festival if you didn’t have a chance to attend last week.

The Oktoberfest festivals have been running successfully since 2011, and this year is looking to be another huge success. With over 50,000 attendees expected at Oktoberfest 2016, officials are expecting it to be the best one yet. The festivities will start on September 29 and go until October 9—that’s two full weekends to get your German on!

This year, you can expect to really feel as if you’re in Germany, with German food and drink, live music, and traditional German attire. Don’t have an outfit? No worries, you can head over to Oktoberfest London’s web site to purchase your very own lederhosen—you’ll fit right in!

As you can see, no matter where you are in the world, you’re bound to end up celebrating Oktoberfest—which is much more convenient than booking a trip to Germany. If we didn’t list your city, no worries, there are probably things happening locally all over. Just do a quick Google search to find out what’s happening near you.