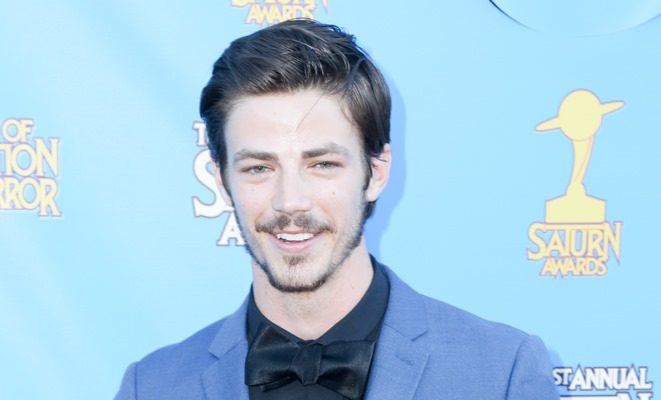 Grant Gustin, star of The Flash, enjoys his morning coffee so much he had to take a picture of it and post it on Instagram for the world to see.

The actor noted that he’s doing the majority of his filming during the night and so he’s taking the time he has in the morning to sit back and enjoy a cup of Joe.

Coffee is, of course, a common way to kick-start the day, and it’s fun to see Gustin enjoying his in a mug that reads “CC Jitters.” (For the uninitiated, that’s the name of a popular coffee shop in the show.)

In order to be a superhero, you need to work out like one and that’s what Grant Gustin does. But his workout isn’t centered around weightlifting or bodybuilding, the way many others are. His character isn’t built that way. Instead, he—like his character—runs. A lot.

He works with a track-and-field trainer, and while on set, Gustin runs on a treadmill for many of the stunts, and fits in pull-ups and push-ups when he can. He also focuses on his running form, so that he doesn’t hurt himself or look silly on camera.

Even before Gustin filmed the pilot for The Flash, he noted that he spent months training to try to add a little weight, as he’s always been quite thin. Part of that is that he’s always been active, so adding this extra training didn’t amount to much of a lifestyle change for him.

Gustin acknowledges that his workout routine differs from Stephen Amell’s—a fellow actor who plays Green Arrow on the hit TV show Arrow. Gustin recognizes that he and Amell have different body types which require different workouts.

When it comes to nutrition, Gustin likes to keep it simple and doesn’t really have much to worry about. He says he doesn’t count calories, and he’s thankful that his character is thin and that the producers wish to keep him that way.

If you want to take notes from The Flash himself, the takeaway from Grant Gustin’s Instagram post is that it reveals the importance of taking that short time in the morning to relax and enjoy some coffee no matter how fast you’re running through life.