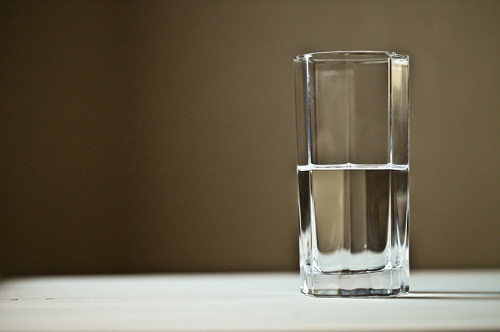 It is well known that water is good for you, but a new study out of the University of Illinois goes a step further by suggesting plain water can be used as a way to control weight. Taking the study’s results at face value suggests that a few more glasses of water each day can help reduce calorie intake and how much saturated fats, sugar, sodium, and cholesterol are in the diet.

To quickly summarize the study in question: University of Illinois kinesiology and community health professor Ruopeng An drew on data from four waves of the National Health and Nutritional Examination Survey (to get a look at what his 18, 311 subjects ate over the course of two non-consecutive days). He calculated the amount of plain water—defined here as any water from a fountain, tap, or bottle—they ingested as a percentage of their total water intake from other food or drink sources like soda or tea. He then compared this finding to the nutritional contents (or lack thereof) in the diet overall and attempted to draw conclusions from there.

Here is what he found (the findings were consistent across race, ethnicity, economic, and body weight status):

Now, the conclusion An has drawn from all this is that the increase in water is correlated to the reduced fat, sugar, sodium, and calorie intake—and he proposes boosting water consumption as a possible way to improve public health. Unfortunately, his own findings don’t support this conclusion. The one percent increase in plain water that An observed works out to 0.042 cups on average, an extremely small increase. Similarly, the perceived effects on fat, salt, and sugar intake are also extremely small—less than a gram in most cases. These small numbers are a problem because they make it much more likely that the findings were just the result of statistical noise.

Remember: The data An drew on is only for two non-consecutive days. There is no way to determine whether the nutritional information he collected is representative of the participants’ diets or average eating habits. Furthermore, An has not established whether his observation is correlation, causation, or statistical noise. An is assuming that plain water consumption is the determining factor here, without any evidence to back the claim up. For all his data shows (and assuming these minor deviances are not statistical noise), it is equally possible that eating less saturated fat is responsible for the observations.

Bottom Line on the University of Illinois Study