Home > Food Facts > Spices > What Are the Best Substitutes for Nutmeg? 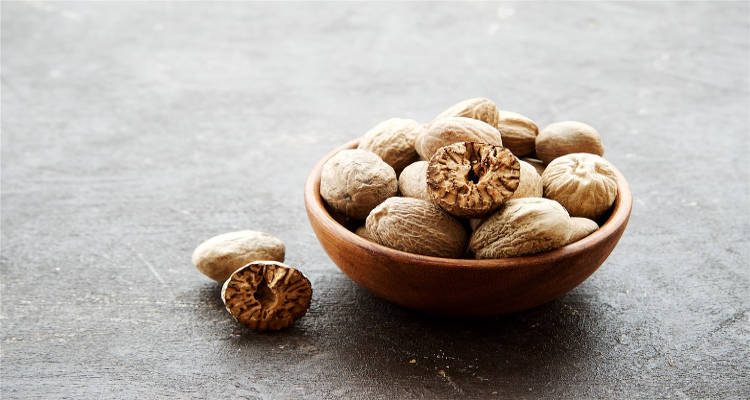 It’s a sweet and savory spice that everybody loves. We’re talking about nutmeg, which can really elevate the taste of countless foods and beverages. Nutmeg is a warm, earthy, and delicate spice that is very popular in cuisines from all over the world. It’s a holiday favorite for baked goods in North America and a signature ingredient in a multitude of Indian and Middle Eastern foods.

But what will you do if you run out of nutmeg or have a guest at your place with a nutmeg allergy? Don’t worry. Even though nutmeg has a distinctive taste, it is easy to replace it with other herbs and spices. These nutmeg substitutes provide a similar nutty, woodsy flavor that’s also subtle and will do wonders for your dishes.

In such a situation, you can use any of the nutmeg substitutes readily available in your neighborhood supermarket. You should keep the following nutmeg substitutes well stocked in your kitchen so that you don’t have a problem when you’re cooking something delicious for your family and friends.

There are several nutmeg substitutes you can use in your cooking, such as:

Mace is the king of all nutmeg substitutes and experts rate it as the best replacement for nutmeg. Mace has a similar flavor as nutmeg, but that shouldn’t surprise you as it comes from the same tree and is part of the same spice. Mace is made from the “aril” that grows over the nutmeg seed.

If you don’t have nutmeg, you can add a similar amount of mace to your recipe. While mace is a very mild and does not have all the flavors you’ll find in nutmeg, it is still your best bet because the two spices are so similar.

You could replace nutmeg with allspice, which is nothing more than a blend of three spices, namely cinnamon, cloves, and nutmeg. It is a widely used mixture in a range of desserts and savory foods. Allspice not only contains some nutmeg, but it also comes loaded with two extra spices that are guaranteed to stimulate your taste buds.  So if you can’t get your hands on nutmeg, go right ahead with allspice.

Cinnamon doesn’t taste exactly like nutmeg, but it is equally pungent with a wood-like flavor. Nutmeg comes from the seed of the Myristica fragrans tree, while cinnamon is procured from the inner bark of several different trees belonging to the Cinnamomum genus. It is ideal for adding to your desserts and other dishes as well.

Cinnamon has a stronger flavor than nutmeg, so experts have said that you should use half the amount of cinnamon you would nutmeg in your dish.

You can use a mixture of ginger, allspice, cinnamon, and nutmeg to add to your dishes to get the taste you want. This popular spice blend can be used in many fall harvest foods, both sweet and savory. It’s commonly used to make both pumpkin pie and the ubiquitous pumpkin spice latte, which is why it’s called “pumpkin pie spice.”

It may be the perfect choice for your dishes as you will get some nutmeg as well as other complementary holiday spices.

Cloves are another excellent substitute for nutmeg. They have a sweet yet spicy flavor with a hint of pepper that goes well with nutmeg. That’s why you likely won’t be surprised to know that many recipes call for both to be added to your dish. Be careful to use just half as many cloves as the amount of nutmeg you would normally use.

But if you are cooking a dish that already calls for cloves, then you’ll want to choose another nutmeg alternative. Whatever you do, don’t go too heavy on the cloves.

Aniseed has a hint of licorice that makes it a good substitute for the camphoraceous quality of nutmeg. You will do no wrong by using aniseed, which is slightly different but just as delicious an ingredient.

How Much of the Substitute to Use Instead of Nutmeg

What to Use Instead of Nutmeg in Cooking

The Last Word on Nutmeg Substitutes

Nutmeg is a warm, earthy spice that is especially popular in sumptuous holiday treats as well as in the cuisines of India and countries of the Middle East.

If for some reason you run out of nutmeg or are serving a guest with a nutmeg allergy, you don’t have to panic at all!

Luckily there are several nutmeg substitutes available such as mace, allspice, cinnamon, pumpkin pie spice, cloves, and aniseed. These will do the job for you and even add some extra value of their own.

So don’t be surprised if your family and friends just love what you’ve served and ask for more helpings than usual. So pat yourself on the back. You just cracked the nut!