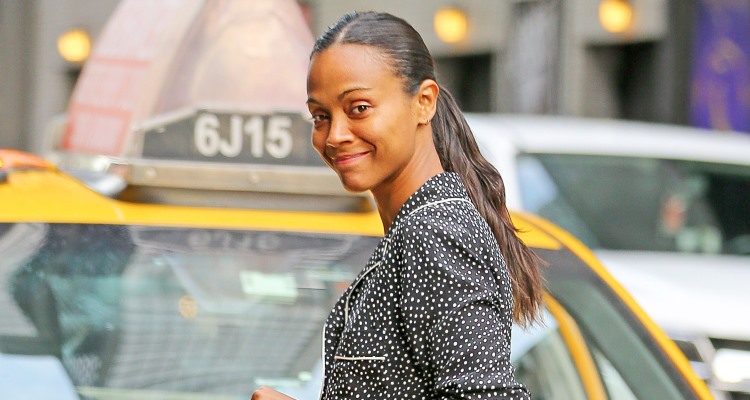 Star Trek Beyond star Zoe Saldana was on The Late, Late Show with James Corden last week promoting her new movie, released July 22, that she stars in with Chris Pine. Saldana says of her co-star, “I love Chris, but he’s always hungry. This man eats, like his stomach is like a bottomless pit,” to which she started making hand gestures imitating Pine shoveling food into his mouth, and then wiping it off his chest and pants. She says, “it’s like there’s food everywhere.”

Corden asked Pine about this a few days later when he was on the show, and after playing the clip of Saldana mimicking how he eats, he asked, “The question here is do you care to address this?” to which the camera panned over to Pine showing him eating a huge sub sandwich and drinking from a bottle of beer. The guy has a wicked sense of humor! Corden then went on, after laughing for a minute, to ask Pine how and why he eats so much. Actress Imogen Poots, who was sitting next to Pine on the stage couch, piped in saying that Pine had a lot of crumbs on his suit.

“How do you stay in this shape eating this volume of bread?” was Corden’s next question, but Pine started smirking because he couldn’t answer right away thanks to what was a rather too-chewy baguette. “You didn’t think this through?” Corden asked, laughing. It took a good minute for Pine to finish chewing and he never got around to answering the question.

At one point, Poots took the sandwich from Pine to eat a few bites, and waved it in his direction while talking, which of course sent some lettuce flying out. Chris Pine’s five second rule kicked in: he picked it up and ate it. Only Pine can get away with that and look good doing it.

Though Chris Pine’s appetite has been documented on national television by co-star Zoe Saldana as being a bottomless pit, how does he stay looking so good? Well, it turns out that Pine, who showed off his ripped body on the cover of the July/August issue of Men’s Fitness magazine, doesn’t think it’s healthy for the body, the liver in particular, to bulk up by eating 5,000 to 7,000 calories a day, as Chris Hemsworth and Chris Evans did for their roles as Thor and Captain America, respectively. But health issues aside, bulking up to that extent would have given the wrong body type for Pine’s character, Captain Kirk, anyway.

Pine has said that he has a high metabolism, he takes snacks with him wherever he goes, and that there is always food in his fridge. His diet focuses on eating a lot of high-calorie foods that don’t consist of empty carbs (like the bread he was munching on during The Late Late Show). His goal isn’t to bulk up, but instead to keep a lean and muscular physique, so he’s mindful of how many carbs he needs to eat to maintain that particular look and to meet his energy requirements. Sounds like he has a solid understanding of how to eat for his body type and goals.