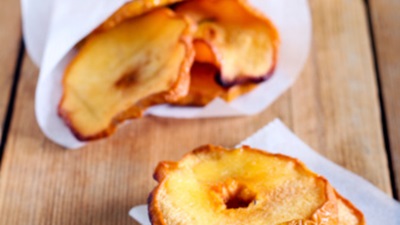 Americans spend more than $7.0 billion each year on potato chips. The addictive crunchy and salty snack might as well be considered its own food group because of its common use as a side dish to sandwiches, hotdogs, or hamburgers.

When potatoes are eaten in their natural form, they contain beneficial nutrients, such as vitamin C, vitamin B6, potassium, tryptophan, manganese, antioxidants, and fiber.

They are known to be a contributing factor to weight gain, type 2 diabetes, heart disease, cancer, and nerve damage. When potatoes transform into deep-fried snacks, like French fries and chips, and are either topped with melted cheese and gravy, or scooped in onion dip, they suddenly transform from a healthy snack to an addictive, dangerous disaster!

Whether chips are baked, or fried, the ingredient list of most processed snacks contain many chemicals, preservatives, and additives, giving these snacks their signature taste.

The potato is the common ingredient of most deep fried chips, although corn, and other vegetables, along with several other flavors, can also create this staple snack food.

Because chips don’t have to necessarily come from the potato, what are some options when you are craving a snack, but prefer eating healthy? Here are some chip alternatives that make great healthy snack ideas.

For healthy snack ideas, start with kale chips. Kale contains high amounts of vitamins A, C, and K, and is high in calcium. You can buy kale chips at most health food stores; however, you may prefer to make yours at home, where you can season them less than the store-bought counterpart, and they taste fresh and crispier.

Set aside one bunch of kale, one teaspoon of sea salt, and a tablespoon organic olive oil. Wash the kale thoroughly then dry with a salad spinner. Mix the ingredients in a salad bowl, evenly mixing the flavors. Place on a non-insulated baking sheet with parchment paper, and into the oven at 350 degrees F (175 degrees C) for about 15 minutes, until edges are golden brown.

Baked apple crisps can be found in stores; however, baking your own apple slices is a healthy snack idea to get your fiber and vitamin C. An easy healthy recipe just requires one to two apples of your choice, and a teaspoon of cinnamon. Use a sharp knife to thinly slice your apples, and neatly arrange the slices on a non-insulated baking sheet with parchment paper. After pre-heating the oven to 200 degrees F, bake for about one hour, then flip and continue baking for one to two hours, while flipping on occasion.

Serve and enjoy, as one of these apples won’t keep anyone who loves eating healthy away.

If you want to add more culture to your healthy snack ideas, this root vegetable will do the trick. The taro’s cousin is the potato, but it contains 30% less fat, and three times the amount of dietary fiber, as well as loads of ACE vitamins. It can also be easily digested.

Taro chips can be found on store shelves. To try healthy snack ideas, make your own taro chips. Ingredients would include one taro root, organic olive or sunflower oil, and sea salt. Slice the taro into very thin slices, after removing the rough surface of the taro with a peeler. Lightly coat a non-insulated baking sheet with your desired oil. Bake in the oven for approximately 20 minutes (chips will be golden brown), after pre-heating oven to 400 degrees F. Serve and enjoy, this exotic healthy snack idea.

These chips will be metaphorically sweeter than its nightshade family member, and is perfect for those who prefer to stick to potato, as an eating healthy snack. Sweet potatoes contain plenty of the mineral manganese and vitamin A. You can find baked sweet potatoes chips at a health food store. Also, bake your own, with two large organic sweet potatoes; one to two tablespoons of organic olive oil, and a pinch of sea salt would be optional.

Like the apples chips, they will take a little longer to make. Here’s a recipe for this healthy snack: Wash your sweet potatoes, then slice them thinly. In a bowl, mix the sweet potatoes with olive oil and salt, then place them on a non-insulated baking sheet, and into the oven at 200 degrees F for an hour and a half to two hours. Remove once golden brown, and enjoy this hot sweet potato chip.

As an option for buying chips at the store, I usually purchase certified organic blue corn chips with flax seeds, whereas most potato chip brands have several food additives, chemicals, and long, hard to pronounce ingredients. This healthy snack has nearly 50% of its ingredients in the title, only consisting of organic blue corn, organic sunflower oil, organic flaxseed, sea salt, and trace of lime.

Blue corn is high in lysine, anthocyanin, zinc, and iron, and the benefits of flaxseeds include being a good source of micronutrients, vitamin B1, and omega-3. Try to find organic blue corn chips that are baked, and enjoy one serving per snack size (26 chips).