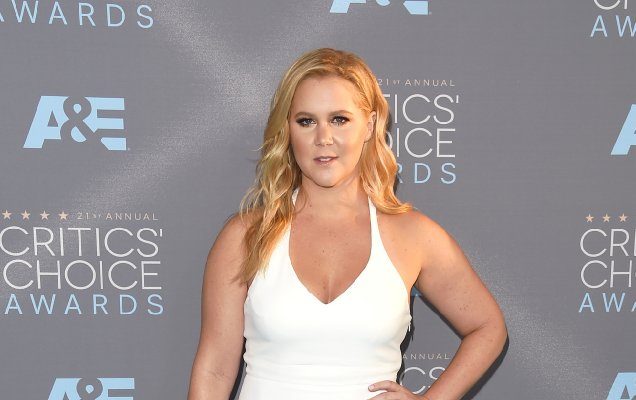 Amy Schumer has always been different from other Hollywood personalities. This is because unlike others, the lady does not believe in fads like crash dieting and resorting to unhealthy eating habits for a skinny body.

Always someone who was on the heavier side, Amy loves her body and oozes with confidence at all her public event appearances. Amy is also the co-producer of the popular comedy series, Inside Amy Schumer.

Amy recently uploaded a picture on her Instagram page which showed a daring side of her. Dressed in satin lingerie, she took a picture of herself, which was a mirror reflection.

The picture was probably clicked in her bedroom and in which she donned a sexy beige number. She captioned it “#girls who aint on tv cause they got more ass than the models.”

Brimming with self-confidence, her post was a clear message to women around the world to be comfortable in the body they are blessed with and to have no regrets. It also clearly spoke about a positive body image.

The Instagram upload was ‘liked’ by more than 600,000 fans and many more left admirable comments on it.

Amy Schumer has always been a lady brimming with confidence and positivity, especially when it comes to her body. The same has also been reflected through her social media pages.

Sometime earlier, the actress also spoke how comfortable she feels in her body and how she wouldn’t change a thing about it. Amy is “between a size six and an eight” and strongly stated that she is not plus size.

Known for her role in Trainwreck, Schumer’s trainer Harley Pasternak revealed some of her workout secrets which she resorted to, to get in shape. During the course of her training, Harley revealed that Amy is amazingly dedicated and flexible.

He also stated that Amy is very active in her everyday routine, even when she is not working out. “I’m very, very proud of her. She transformed herself,” said the trainer, beaming with pride on Amy’s achievements.

Starting off as an aerobics instructor in college, Amy has been into fitness since many years. “She’s amazing . . . people don’t realize she’s super fit! She will run circles around people,” reveals Pasternak.

He also said that she focuses on physical activities throughout the day. Her idea is ‘strong in the gym, lean in life.’ Amy usually keeps her workout in the gym simple and brief.

She also seldom takes the car to go places and prefers walking instead. “When she was training with us for Trainwreck, she put on her Fitbit and walked super far to the studio, walked to a cool hike, and then walked back to her hotel,” says Harley.

While walking all day, she also takes phone calls and does whatever work she can in the meantime. In the first half of the day itself, Amy walks about fifteen thousand steps and finishes many of her personal errands, too.
For her workouts, Amy loves aerobics, hiking and cardio.