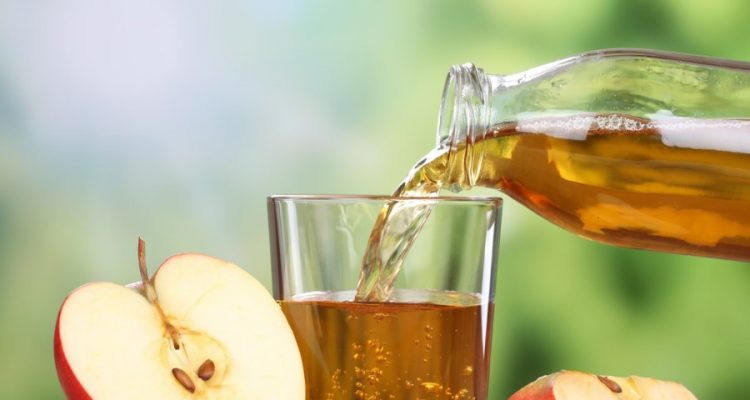 As the saying goes, “An apple a day keeps the doctor away.” Fortunately, there are many ways you can take advantage of the nutrition within apples, including through drinks like apple juice, apple cider, and apple cider vinegar (ACV).

Each of these apple byproducts requires another for its creation.

Apple juice is made by macerating, or soaking in liquid, and pressing an apple. There is nothing better than freshly squeezed apple juice, especially when you have your own juicer.

Apple cider, on the other hand, is made from the apple juice extracted from the pulp of pureed, or mashed, apples. Apple cider vinegar is then made from fermented apple cider.

We will compare how each apple byproduct is made and what you need know about their nutrition profiles. We will also discuss how the health benefits compare, and whether you can substitute one for the other in recipes.

Each apple drink is the result of a unique process. Read on to learn exactly how apple juice, apple cider, and apple cider vinegar are made.

How is apple juice made? It is made through a process called maceration, which is the softening of the fruit by soaking it in liquid. Then, the softened apple is pressed.

On the other hand, centrifugal juicers generate heat, which destroys many beneficial enzymes.

Concentrated, filtered, and pasteurized apple juice is also made available at your local grocer. However, these juices likely are high in sugar, additives, and preservatives.

It takes about a third of a bushel to make a gallon of apple cider. Once made, apple cider should be refrigerated.

Is apple cider alcoholic? Well, it may depend on where you live in the world. Outside the United States and Canada, the term “cider” refers to an alcoholic drink made from the fermented juice of apples.

Within the North American countries, however, “apple cider” will stay sweet and unfermented for about two weeks, but if left to ferment, it can become fizzy, and therefore slightly alcoholic over time. Then, it is known as “hard” cider.

What is the difference between apple cider vinegar and vinegar? Both have acetic acid; however, other vinegars also contain amino acids, mineral salts, vitamins, and other acids.

In this section, we will compare nutrition profiles of apple juice, apple cider, and apple cider vinegar.

What do you need to know about apple cider nutrition? A cup of apple cider contains 30 grams (g) of carbohydrates, as well as trace amounts of vitamin C, potassium, and iron.

The following is a table that compares the apple juice nutrition profile with the data of apple cider and apple cider vinegar.

Which Is Better? Comparing Health Benefits

Apples are a high-antioxidant food with a significant number of flavonoids. Apples are also considered to have one of the highest total concentrations of phenolic compounds—bioactive substances that include flavonoids.

Researchers from the University of Massachusetts found that giving mice two glasses of apple juice daily for a month lowered their levels of beta-amyloid—a protein responsible for plaque buildup that leads to Alzheimer’s disease.

A 2008 study published in the journal Planta Medica found that apple juice also reduced the risk of skin, breast, and colon cancer. The vitamin C in apples might also fight free radical damage and help protect cells and DNA from malformation and mutation.

Some commercially made apple juice also contains traces of mountain ash, which is made of 50% potassium carbonate.

Moreover, apple juice could help you manage your weight loss.

Apple cider vinegar, on the other hand, contains its own set of health benefits. The acetic acid in apple cider vinegar is thought to reduce high blood pressure, improve skin health, and balance your pH levels.

Can You Substitute One for the Other?

The answer here is that you can replace apple cider with apple juice; however, this will depend on the recipe.

Recipes with apple juice will be sweeter than those with the apple cider. This is because the filtration process for making juice will remove some of the bitter and tart flavors present in apple cider.

For other ACV substitutes, there are other combinations you can use. Vinegar can be combined with ginger root, turmeric, pomegranate juice, thyme, and more.

There is no question that the apple is nutritional superfood. You can do far more with it than bite into it. You can also juice it, make it into cider, or use fermented apple cider to make apple cider vinegar.

That being said, when you purchase them, look for organic varieties. Also, when it comes to apple cider vinegar, it should also be raw, unfiltered, and with the mother still intact for the most nutritional benefits.

If you make your apple juice, consider using a slow-speed juicer rather than a centrifugal juicer. Slower juicers extract more juice than the centrifugal variety.