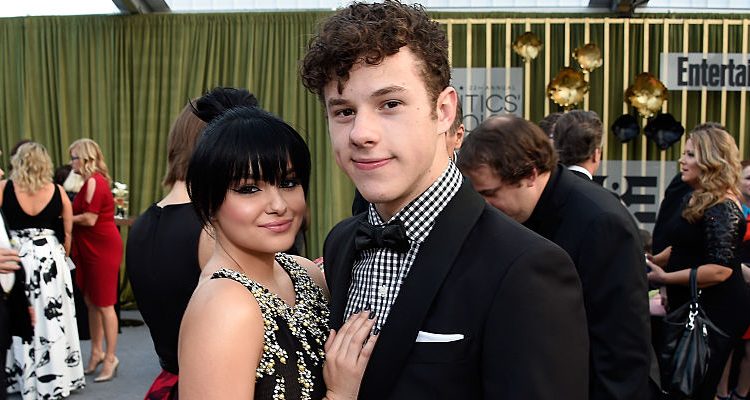 Modern Family star Ariel Winter is on vacation! The actress, who plays Alex Dunphy on the popular sitcom, traveled to Bora Bora with a group of friends that included co-star Nolan Gould. The 18-year-old Winter took advantage of the beautiful scenery to work on her tan and take some swimsuit pictures.

She would post a somewhat scandalous shot to Instagram with friend Jessie Berg that showed off the girls’ backsides in bikinis. Winter also posted a picture of her sitting in a black one-piece swimsuit while on a boat.

?your favorite wives in paradise?

Gould portrays Winter’s on-screen brother in Modern Family, Luke Dunphy. He shared several beach shots of the vacation and also wrote that he wished the group of friends could extend their trip.

Wishing we could extend this trip just a bit.

Winter would also Snapchat a picture of her hip tattoo, which translates from Greek to “Love Risks Everything And Asks for Nothing.” Ariel Winter’s new boyfriend, Levi Meaden, was not pictured in the vacation photos. However, the couple did celebrate New Year’s together, according to this Instagram shot.

Loving you all the way into 2017❤ #happynewyear #nye

Ariel Winter portrays the shy and nerdy Alex Dunphy on Modern Family; however, her Bora Bora vacation photos clearly show that Winter has a bit of a wild side. The pictures also reveal that Winter is in fabulous shape. Winter often shows off her body in body positive posts on social media. Winter has overcome body shamers on the Internet in the past due to her naturally curvy figure. As a result, Winter is now an activist against body shamers.

Winter has said that when she was younger, she dealt with a lot of body insecurities due to a difficult relationship with her mother. Winter now focuses on loving her body with an active gym lifestyle and overall healthy diet. Let’s take a brief look at what Ariel Winter does to maintain her fabulous Bora Bora body.

Winter’s weight loss is well publicized, especially after the actress decided to have breast reduction surgery when she couldn’t fit into a swimsuit. Large breasts also gave Winter neck and back pain issues. Winter had the controversial breast reduction surgery when she was 18. The surgery led to noticeable weight loss, and she dropped from a 32F bra size to a more comfortable 34D.

Besides Modern Family, Winter is known for her voice roles in Sofia the First (2013 to present), ParaNorman (2012), and Mr. Peabody & Sherman (2014). Winter will manage her acting career with plenty of exercise. For instance, Ariel Winter works with celebrity trainer Gunnar Peterson, who also trains Jennifer Lopez, Khloe Kardashian, and Kim Kardashian. Winter has also been seen working out with ex-boyfriend, Laurent Claude Gaudette, at the gym. She also enjoys doing squats at the gym, and hiking in the Hollywood Hills.

What about Ariel Winter’s diet? Back in 2012, a source for TMZ alleged that Winter’s mother, Chrystal Workman, once forced the star on a diet of only raw vegetables and egg whites. The Modern Family crew reportedly would even sneak Winter food when she wasn’t around.  Workman has denied the allegations. However, Winter now has a healthy, portion-controlled diet that has nutrient-dense foods like immune-boosting garlic. She will also consume complex carbs like wild rice and lean proteins like chicken and fish. Winter also consumes three liters of water daily, and sometimes cheats on her diet with iced coffee and popsicles.