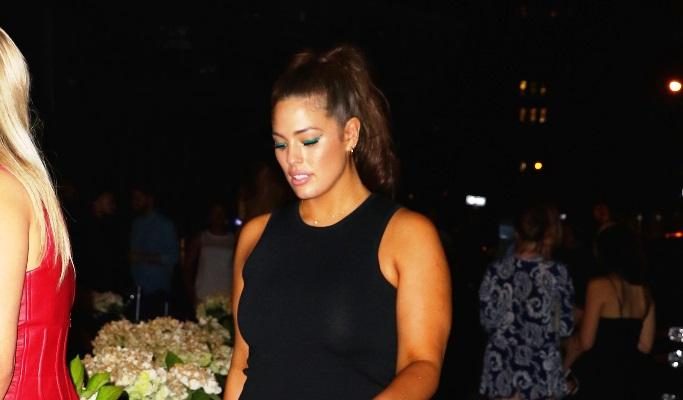 The 28-year-old model sported a plunging black jumpsuit and a chic sheer skirt which revealed her fit body. The custom-made dress designed by Norisol Ferrari was classic, elegant, and looked attractive. Graham looked stunning in the outfit. She took to Instagram later and posted a photo where she is seen walking the pink carpet at the premiere party.

Fans are anxiously waiting for the new season of America’s Next Top Model (season 23) which will premiere on VH1 on December 12. Many admirers can’t wait to see Graham as a judge in the new season.

She has been championing the body positive movement by encouraging women everywhere to find their inner beauty and channeling their inner brilliance outward. Graham’s Instagram feeds are filled with inspirational messages, photos, and videos. For example this photo which is captioned, “I believe you need to be healthy and that health comes in all shapes and sizes. But don’t let the number on the scale determine your worth or how you let others treat you.”

I believe you need to be healthy and that health comes in all shapes and sizes. But don't let the number on the scale determine your worth or how you let others treat you. #sizesexy #beautybeyondsize

Here is another photo and the hashtag says it all, “#beautybeyondsize.”

She exudes confidence and is a role model for many people. The model is also the co-founder of ALDA Women. She was named as People magazine’s most beautiful women, and will also feature on the January 2017 Vogue cover. She posted, “What an absolute honor! My first #vogue cover!! Thank you to everyone at @britishvogue!”

What an absolute honor! My first #vogue cover!! Thank you to everyone at @britishvogue! ????#covergirl #beautybeyondsize #liveyourdreams

The model reportedly said that curvier models should also be a part of the annual fashion spectacle, the Victoria’s Secret Fashion Show.

Many of her fitness admirers are curious about her fitness secrets. Keep reading to find out her workout and diet regimens.

The model likes to watch what she eats and follows a fitness routine to stay fit and enhance her shape. She told TMZ, “I eat what I want in moderation and I workout.”

She says her favorite workout exercise is kickboxing. She also likes to include BoxFit in her routine, which is a combination of cardio and kickboxing. Her workout routine also includes circuit training and sprint training. Her Instagram feeds are full of encouraging messages for fitness enthusiasts. For example, this video in which the model is seen doing her Bosu ball workout. She posted, “Looks complicated, but if I can do it so can you!”

Looks complicated, but if I can do it so can you! @kirkmyersfitness @dogpound #curvyfit #pushyourself

Graham said that people should find a strong role model. As for this celebrity, her role model was her mother. She said, “She taught me that beauty comes from within and instilled confidence in me at a young age.” Now, this is a wonderful and positive message for everyone.

Graham likes to follow healthy eating habits. She starts off her day with a healthy smoothie. Her breakfast includes a green juice with her favorite blend of kale, beets, apple, lemon, ginger, and parsley. Lunch consists of quinoa or a brown rice bowl with vegetables and tahini. For dinner, she usually has baked salmon, sweet potato, and arugula salad.

Her favorite snacks are from her favorite grocery store, High Vibe, in New York City. She usually snacks on Chocolate Tree chia crackers. She includes healthy snacks in her diet and these include of rayo de sol raw (organic vegan rye bread) with vegan Cheezehound blue cheese. She also tries to cook her own food and her signature dish is a kale sauce paste with gluten-free pasta.

Graham enjoys her go-to healthy drink of “Green Giant” from Juice Press. Her food indulgence is macaroni and cheese. Even through she does indulge, the model focuses on eating in moderation.

While fans will stay tuned for America’s Next Top Model (season 23) , many of Ashley Graham’s admirers are anxiously waiting to see her in her new role. Meanwhile, to maintain a super fit body, try adopting her fitness philosophy.