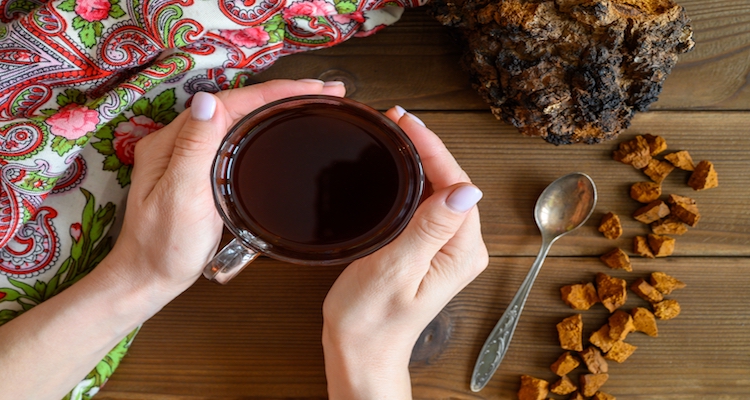 The chaga mushroom is a big part of the mushroom resurgence these days. With historical origins in Siberia and other parts of Asia, this traditional medicine boasts a number of potential health benefits.

Due to their tough, bark-like exterior, chaga mushrooms (Inonotus obliquus) are a common ingredient in teas and coffees. Grown and used traditionally in Northern Europe and Russia, this fungus species that is sometimes called “black gold” was believed to have anti-viral, anti-diabetic, and anti-inflammatory abilities. Modern research, although relatively limited, is showing chaga does have very promising potential in these and a number of other areas.

What Is Chaga Mushroom?

Growing on birch trees throughout the Northern Hemisphere, chaga resembles a dark clump of dirt or piece of charcoal more than a mushroom. Upon close examination, there is some orange tissue that distinguishes it from other species.

Chaga is antioxidant-rich, and if you like the term “superfood,” you’ll definitely be impressed that chaga has one of the highest ORAC scores—146,400—of any food. ORAC stands for “Oxygen Radical Absorbent Capacity,” and is a lab test that measures how well the antioxidants in a particular food hold up to an assault from free radicals.

Although the ORAC test doesn’t indicate how these nutrients react in the body, it can be an impressive indicator of antioxidant potential, nonetheless.

Now, you can’t just pick a chunk of chaga off the tree and eat it, hoping to get all its benefits. Most of its nutrition is unlocked with the addition of hot water or alcohol, which is why it’s a favorite ingredient for teas and coffees. Other supplemental forms are usually extracts.

The alcohol and hot water break down chaga’s tough cellular walls so you an access that black gold. And once you’ve got it, there are a number of health benefits worth noting.

It’s a nutrient- and antioxidant-dense powerhouse that can likely to contribute to a number of health benefits. The nutritional makeup of chaga includes fiber, vitamins like D and B complex, as well as minerals potassium, calcium, magnesium, rubidium, cesium, copper, selenium, iron, and zinc.

Studies, so far, have yielded very promising results in a number of areas. When combined with centuries of anecdotal evidence, there is plenty to get excited about. Doctors, alternative medicine advocates, and practitioners, along with researchers, are all looking a little closer at chaga for all of its potential benefits.

It should be noted, however, that most scientific findings are a result of animal and lab studies. Research using humans is lacking at this point.

Chaga tea can help with digestion problems by regulating bile production to help with food breakdown. It also helps break down foods that are a little harder to digest, making nutrients more readily available for absorption. Basically, it can help you get more from the healthy food you’re already eating.

May Slow the Aging Process

The antioxidant capacity of chaga can have numerous benefits, and some of them can affect how your body ages physically. These effects can take place in ways you can see and also those you can’t.

Although studies have yet to directly link chaga to visible signs of aging like wrinkled skin, graying hair, and sagging skin, the benefits that have been noted in fighting other forms of oxidative stress suggest they could help protect your appearance. Antioxidants help protect cells in all of your organs to encourage better health for longer.

May Protect Your Heart

Chaga poses many potential benefits to heart health, including lowering blood pressure, reducing “bad” LDL cholesterol, and acting as an anti-inflammatory. Each of these strengths can play a big role in reducing the risk of a heart attack or heart disease diagnosis.

The antioxidant capabilities of chaga may work to reduce the amount of LDL cholesterol that accumulates along arterial walls that lead to blockages and contribute to heart attacks and stroke. Oxidative stress and inflammation both contribute to high blood pressure and cardiovascular risks, which can also be reduced by the presence of powerful antioxidants found in chaga.

According to some sources, researchers are seriously considering chaga’s potential in cancer prevention, or at least in slowing the growth of cancerous cells. Once again, this is likely due to its powerful antioxidant abilities.

Studies have shown chaga can slow the growth of lung, breast, and cervical cancers. These results were shown in a petri dish tests—so the chaga was added to cancer cells—and not on animals or humans. There was, however, evidence that chaga slowed tumor growth in mice.

Chaga may work to stop cancer growth by causing the destruction of cancerous cells. It’s believed this action is triggered by triterpenes, which are compounds found in various mushroom varieties. What makes these results particularly promising is that, unlike traditional cancer treatments like chemo or radiation therapy, the chaga seemed to target cancerous cells and leave healthy cells alone. Human studies are still required to identify chaga’s efficacy for cancer treatment.

So far, a few viruses have shown to have weak defenses against chaga’s healthful capabilities. Research from the last three or four years has shown it can support the immune system against hepatitis C as well as HIV type 1. In a study using animal cells, researchers noted that chaga extract was able to decrease the infective properties of hepatitis C by 100-fold in just 10 minutes. Human studies need to be done to see if a similar effect takes place, but the preliminary work looks very promising.

The antioxidants in chaga do not attack the pathogens directly, but rather help the body mobilize to fight them off.

Chronic inflammation also plays a role in heart disease, diabetes, and even conditions like depression, which are not considered “inflammatory.” The regulatory role chaga’s antioxidants appear to play in immune response may include battling inflammation and reducing the damage and pain caused by chronic inflammation.

A study from 2006 showed that chaga extract was able to lower blood sugar in rats. The rats were genetically modified to be obese and diabetic, but after eating chaga extract for eight weeks blood sugar levels lowered, indicating it may be an effective treatment to manage blood sugar.

How to Take Chaga

You can buy chaga mushroom as extract in capsule, tablet, or tincture form, or as part of a coffee or tea blend. You can also forage for your own, but before doing so, understand that selecting the wrong variety could be very dangerous.

As part of a mushroom tea or coffee blend, chaga may be combined with:

In order to get your dosages right, and to be sure it won’t have any interactions with any medications you’re taking, talk to your doctor before use.

You can purchase chaga tea individually or as part of a blend. Here is a quick, at-home recipe for a cup of chaga tea:

Take a teacup with an infuser or filter.

In most of the population, chaga mushroom has been shown as safe to use. That doesn’t mean that it’s entirely risk free. Because it can lower blood sugar, anyone taking insulin or other blood sugar lowering medications should avoid use or seek advice from a doctor.

Lastly, do not go out and forage for your own chaga unless you are accompanied by an experienced mushroom forager. Fungal varieties can be easily confused and inaccurate identification can lead to poisoning.

For most people, however, adding chaga could provide some noticeable health benefits.