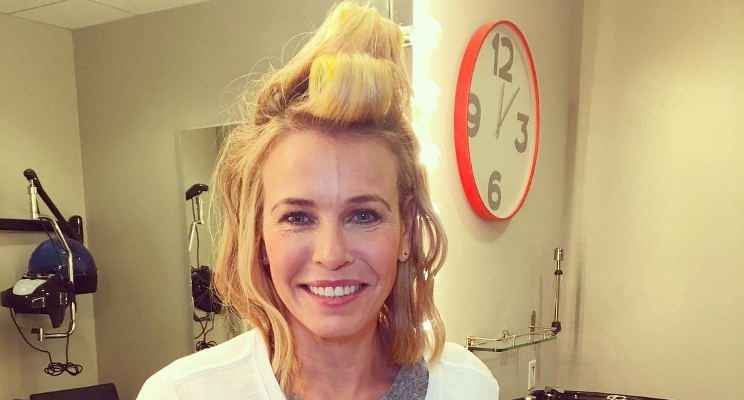 Comedian, writer, and television host, Chelsea Handler, is probably still coming to terms with the outcome of the 2016 presidential election, and her recent lifestyle tip on Instagram is filled with positiveness. Handler took to Instagram and posted this note to self, captioning it, “I wrote this note to my younger self. Hope it helps.”

I wrote this note to my younger self. Hope it helps.

Self-notes are wonderful as they help to get one’s thoughts back on the right track, and this lifestyle tip shared by Handler will help encourage many fitness enthusiasts. The message says, “Don’t drink diet soda,” and “Find some exercise you like to do and do it.” These simple rules on diet and working out contribute to a healthy lifestyle.

The stunning comedian has been a strong supporter of presidential candidate, Hillary Clinton. She took to social media and voiced her support in the recent past, for example this tweet on Twitter which is captioned, “This is me and my bff @marycmccormack volunteering for Hilary. If you want to volunteer @HLA4HRC.”

This is me and my bff @marycmccormack volunteering for Hilary. If you want to volunteer @HLA4HRC pic.twitter.com/CrOqpk5MSJ

Another pic on Instagram was captioned, “Me and my yaya @marycmccormack spending the day helping get our girl elected. It feels good.”

Me and my yaya @marycmccormack spending the day helping get our girl elected. It feels good.

Handler’s new TV show, Chelsea, on Netflix, aired in May 2016. After Donald Trump’s victory in the 2016 presidential election, Handler, broke down on her TV show. During her show, she said, “Like a lot of people in this country, I’m sad. I’m disappointed, and I’m confused. But if Hillary [Clinton] can make it through a concession speech, then I can make it through a stupid television show.” The host was later joined by California Senator Barbara Boxer, who also expressed her disappointment over Donald Trump’s victory. This YouTube video is a sneak preview of the show.

The television personality looks stunning, and is also on the list of 100 Most Influential People as reported by TIME magazine in 2012. How has Handler maintained her fitness? What are her fitness secrets? Read on and find out more on her workout and diet.

Handler has maintained her fitness through diet and exercise routine. Her routine may have helped her with her weight loss, she shares, “It took me a long time to deprogram myself, to get rid of my unhealthy weight loss diet plans and flaky commitment to any kind of fitness exercise program,”

The comedian prefers Pilates in her workout routine over yoga or hitting the gym. She shares, “I can honestly say Pilates exercise has changed my body and my life. I’m so happy to finally find the right fitness exercise for me.” She feels that Pilates is a gentle form of exercise for her, and adds, “I’m longer and leaner and much more graceful.”

Handler’s personal trainer helps her with her workout routine. Her workouts also include sprint exercises and fitness training, and she avoids doing cardio exercises at the gym. The 41-year-old host admits that a mix of exercises in her fitness routine helps her with burning off the body fat.

Handler believes in eating healthy. As the comedian was growing up, she admits that she did not know how to eat healthy. Her self-note on the lifestyle tip posted on Instagram recently must have been a reminder to focus on diet and workouts. The celebrity avoids fast foods and yo-yo diets, and focuses on a diet which includes wholesome foods—avoiding anything processed. Here is a sample of her diet plan:

Breakfast – A bowl of oatmeal mixed with a scoop of protein powder, and about a spoon of ground flax seeds
Mid-morning Snack – Turkey and arugula salad
Lunch – Sushi
Dinner – Green salad with a turkey meat loaf

She is guided by her nutritionist who helps her with recommendations on healthy eating. She loves drinking and did not want cut alcohol out of her diet. Recommendations like having her vodka with soda helped her to enjoy having her drinks and says, “He explained that calorie-wise, vodka isn’t so bad, as long as you drink it with soda so knowing I could still have a drink made it easier to stick to my weight loss program.”

A healthy lifestyle contributes to positive outlook and Chelsea Handler’s recent note to self is a great example of this. Her lifestyle tips and her fitness routine are encouraging. To stay in shape, try adopting her lifestyle tips.