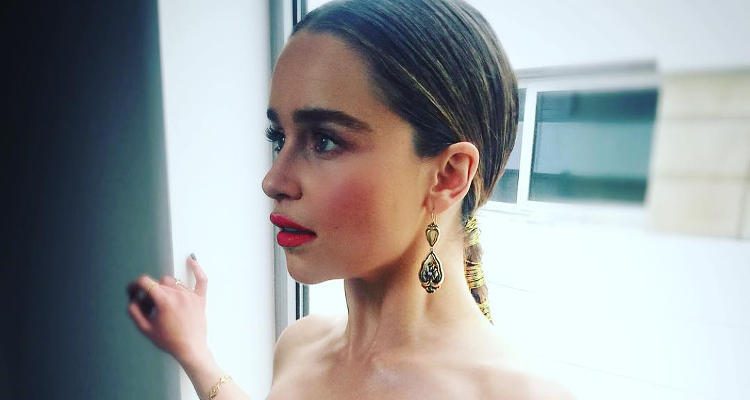 Emilia Clarke’s killer looks and perfectly curved figure can drive anyone crazy. There is speculation that Kit Harington has fallen for Esquire magazine’s Sexiest Woman Alive (2015), as he was spotted with her a couple of times. Harrington has been in an on and off relationship with Rose Leslie. Since the current status of their relationship is off, we speculate that he is now dating Clarke.

Rumors are rife about the couple seeing each other, as they were seen enjoying their time together outside the set of the Game of Thrones.  The pair watched a football game at the Ramon Sanchez Pizjuan Stadium in Seville, Spain, but were accompanied by other co-stars. Let’s take a look at what makes Clarke look so stunning.

“My diet was pretty strict,” Clarke said. “I ate very clean … One cup of tea. No sugar, no cream.” In a previous interview, she described her audition for Game of Thrones, “I abstained from sugar for the whole three weeks before my final audition, to look my best. I walked into an auditorium filled with every single executive in HBO, and they gave me a Coke – so I began bouncing off the walls.”

She follows a pretty clean and lean diet created by James Duigan, who drafts diet plans for other celebrities including Rosie Huntington-Whiteley and Elle MacPherson. According to Duigan, a healthy body can be achieved through healthy eating. He doesn’t insist on restriction and moderation is the key. His diets are designed to cleanse your body of fattening toxins and work best when you consume food in its natural state.

Duigan has also created Bodyism, which is a workout plan that goes with lean and clean eating. So far, there are locations in London, Capri, Turkey, and the Maldives and classes include boxing, ballet, and yoga. The key to a lean body is fueling it with clean foods that are rich in nutrients and regularly exercising.

Clarke may consume a lot of proteins and carbs to keep her sustained during her intense workouts. She avoids of all of her favorite snacks, except for tea with a tiny bit of sugar. She eliminates foods with high sugar content, wheat, caffeine, and dairy products. She consumes a lot of fresh fruits and veggies which helps her have radiant and flawless skin.

Her character in Game of Thrones requires her to strip down so she ensures she sticks to her workout routine. The actress goes through all the grueling exercises like weight training, kickboxing, shooting guns, cardio, and stunt training. While it is hard to even imagine oneself doing these workouts, Emilia Clarke prepares herself for it mentally and physically by eating right.