Home > Advice > Ginger on the Brain: Spice the Answer for Alzheimer’s? 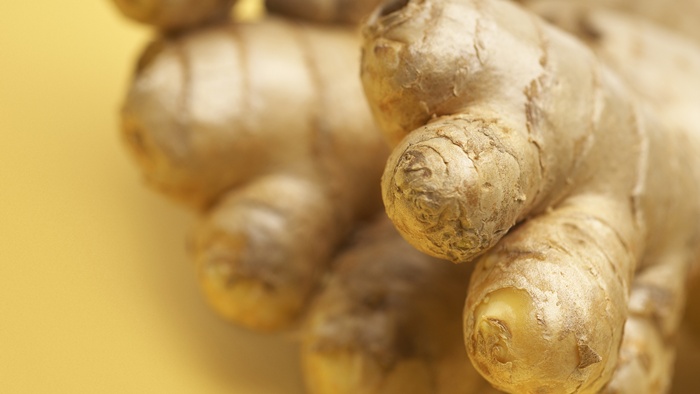 In ancient Sanskrit, ginger, is called “singabera,” which means “horn shape.” The knobby, horn-shaped root delivers a pungent, distinct aroma and flavor. Native to southeastern Asia, it’s a staple in natural treatments for digestion problems and inflammation, among other ailments.

I like adding ginger to homemade smoothies and juices and my brown rice side dishes. I also grate some raw ginger into a salad dressing. I do this because of ginger’s amazing health benefits—it contains antioxidants and the potent anti-inflammatory compounds, gingerols, which can help relieve arthritis, swelling and muscular pain. It also can boost the immune system, soothe gastrointestinal (GI) issues, and help kill certain cancer cells.

Is ginger now on your mind? According to a recent study from the neurochemistry department at the National Institute of Mental Health and Neurosciences, it may also protect your mind, memory and cognitive function when you get older. The study was published in the Indian Journal of Experimental Biology, and cites methanolic dried ginger extract as a possible natural treatment for Alzheimer’s, a degenerative disease that destroys brain cells and the most common form of dementia.

Researchers found positive results when humans and animals were treated with ginger extract doses as high as two grams a day, with only minor digestive complaints.

The study researchers observed ginger’s antioxidant ability and “neuroprotective” properties. The neuron is the basic working unit of the brain, a specialized cell designed to transmit information to other nerve cells, muscle or gland cells. The antioxidants and gingerols found in ginger are linked to protecting against the premature degeneration of brain neurons caused by Alzheimer’s disease.

Further studies are needed, of course, but consider using ginger to add a little spice to your home cooking or brewed tea.

Many of us look for natural alternatives to bypass the possible side effects from pharmaceuticals, and ginger may not be the only spice with protective abilities for Alzheimer’s disease.

A 2007 study in the Journal of Alternative and Complementary Medicine would also suggest the brain cell protection ability of ginger, and 26 other herbs, when extracted with chloroform and aqueous methanol. Additional herbs in the study included Ginkgo biloba, curcumin, Chinese cinnamon and Korean rhubarb.

Herbs became underrated after the rise of pharmaceutical companies; however, the number of beneficial studies indicates an herbal renaissance of sorts. Overall, research dictates that ginger can be beneficial to prevent a number of diseases beyond Alzheimer’s, including rheumatoid arthritis, osteoarthritis, pneumonia and type 2 diabetes. Adding the spice to meals beginning at a young age, and through your golden years, may be a powerful health protector.

All good reasons to spice up your meals with zesty ginger!