Home > Celebrity Workouts > How Did Jamie Dornan Work up His Body for “Fifty Shades Darker” alongside Dakota Johnson? 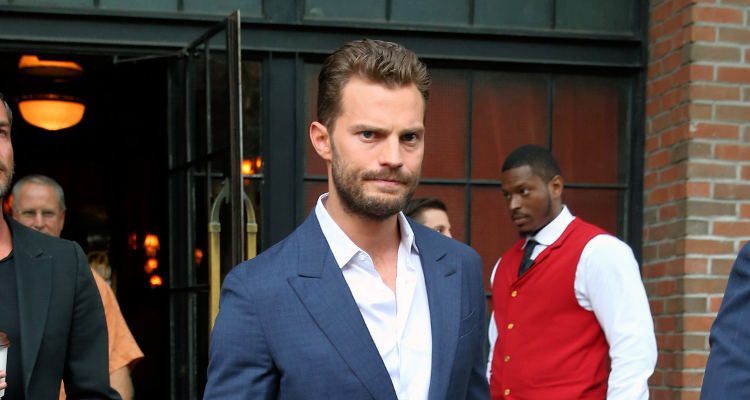 Jamie Dornan is all set to wow fans with his good looks and chiseled frame on February 10 in Fifty Shades Darker alongside Dakota Johnson. In the meantime, fans can treat themselves by watching the two-minute trailer. Fifty Shades Darker is the second installment in the Fifty Shades franchise, and the sequel to the 2015 film, Fifty Shades of Grey.  The sequel portrays Christian Grey and Anastasia Steele’s intensifying romance with an ample amount of steamy scenes.

In Fifty Shades of Grey, the duo lacked chemistry but they make up for it in the sequel with raunchier sex scenes, making it more believable and appealing, according to New York Magazine’s, The Cut. Despite the low chemistry, the movie broke numerous box office records and earned over $571 million worldwide.

Keep reading to find out how Jamie Dornan worked out his body for Fifty Shades Darker.

Jamie Dornan trained at Iron Fit and his routine consisted of strength training and different variations of push-ups and crunches which gave him well-toned abs, arms, and core. He warmed up with three sets of battle rope, kettlebell swings, and sledge hammers for 30 seconds each. This was followed with five reps of ring push-ups, 10 reps of bent-over rows, and 20 reps of power lunges. Dornan ended the routine with five sets of 10 reps each of core pike slideouts and Aussie pull-ups, as well as doing 100 meters on a Prowler sled.

Dornan loves playing sports which also contributes to his healthy lifestyle and helps him stay in shape. He likes to go for a swim after a tiring day to relax himself and tone his body. The actor plays tennis three times a week to have strong leg muscles and to enhance his cardiovascular fitness which helps him stay energized.

Rugby is another sport which Dornan has been enjoying for a long time and he believes it has made him more strong with time. It is a gives him a good upper body workout. He also golfs, skis, and plays soccer.

Jamie Dornan is super active and in order to keep pushing himself throughout the day, he needs to fuel himself with a balanced diet. He had to bulk up for his role as Christian Grey, so his trainer increased his caloric intake. He made him include more proteins and his diet also consisted of plenty of fruits, and veggies.

The third installment of the Fifty Shades franchise entitled, Fifty Shades Freed, is scheduled to be released on February 9, 2018. Jamie Dornan’s fans are sure to be eager to see what he has in store in the upcoming sequels.