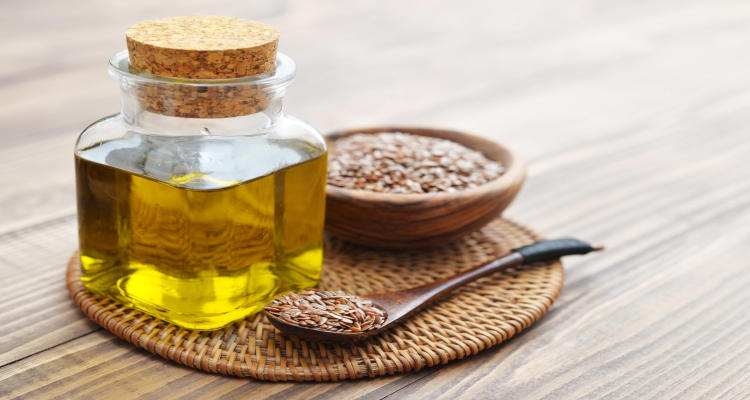 Flaxseed oil comes from the seeds of the Linum usitatissimum, or flax plant. Flaxseed has been cultivated since the beginning of civilization, and is therefore one of the world’s oldest known crops. Flaxseed has been used in traditional Chinese medicine and Ayurvedic medicine for thousands of years.

Many of the flaxseed and flaxseed oil benefits are due to the omega-3 essential fatty acid called alpha-linolenic acid (ALA), soluble fiber, and phytoestrogens. As a result, some of the potential benefits include boosting heart health, treating constipation and diarrhea, lowering cholesterol and inflammation, benefiting skin health, helping in weight loss, protecting against diabetes, and treating and preventing cancer.

In this article, we will further explain flaxseed oil benefits. You will also learn about flaxseed oil nutrition facts, flaxseed oil side effects, and how to use flaxseed oil. We will also explain how the oil stacks up against others in a flaxseed oil vs. fish oil comparison section. Let’s get started…

Flaxseed oil is absolutely loaded with nutrition, especially when it comes to the polyunsaturated fatty acids (PUFAs), omega-3 and omega-6.

It is important to get the right balance of PUFAs since omega-6 contributes to inflammation and omega-3 lowers inflammation. In flaxseed oil, the ratio of omega-6 to omega-3 is 0.3:1, and this is in line with optimal consumption.

The following is a comprehensive flaxseed oil nutrition chart for a typical serving size of one tablespoon, or 14 grams (g), of flaxseed oil.

What are the health benefits of flaxseed oil? Like flaxseed, flaxseed oil is loaded with omega-3, which is associated with a healthier heart, reduced inflammation, and better brain and skin health.

You can use flaxseed oil for heart health. For instance, consumption of high-alpha-linolenic acid (ALA) foods like flaxseed oil may prevent and treat heart disease. Some research suggests that people eating a diet high in ALA have a reduced risk of having a fatal heart attack.

One study found that women who ate 1.5 g of ALA daily had a 46% lower risk of sudden cardiac death than women eating a low amount of about 0.5 g of ALA daily. Other research shows that populations eating more ALA foods experience lower heart disease deaths in general.

The ALA in flaxseed oil converts to DHA and EPA in the body. A study published in the Journal of Nutrition in 2006 found that 3 g of ALA from flaxseed oil supplementation daily had increased blood levels of EPA by 60% after 12 weeks, compared to the placebo group that showed no increase in EPA.

2. May Help Treat Constipation and Diarrhea

An animal study published in the Journal of Ethnopharmacology in 2015 found that flaxseed oil possesses laxative and antidiarrheal effects by relieving both constipation and diarrhea.

Another 2015 study published in the Journal of Renal Nutrition examined 50 constipated patients on hemodialysis who had been given olive oil, mineral oil, or flaxseed oil. The researchers found that flaxseed oil had improved stool consistency and increased the frequency of bowel movements.

The flaxseed oil was also as effective as mineral oil and olive oil.

A meta-analysis of 28 studies published in the American Journal of Clinical Nutrition in 2009 confirmed that flaxseed reduces total cholesterol and LDL cholesterol in the blood.

Some also use flaxseed oil for weight loss. Since flaxseed oil is a natural laxative that lubricates the colon, it helps keep the digestive system healthy. This makes it easier to detoxify and lose weight.

One 2015 study published in the Nutrition Journal found that adding flaxseed oil to a weight loss diet had reduced inflammation markers and helped participants lose weight.

How else does flaxseed oil lead to weight loss? Eating flaxseed induces the production of leptin—a protein produced by the fatty tissue in the body. Low leptin signaling can result in overeating, and this can lead to a person becoming obese or overweight.

In a study published in the journal Lipids in 2011, scientists discovered that an increase in leptin production reduced fat buildup and helped support fat loss in the arteries of rabbits.

You can also use flaxseed oil for skin health and skin problems like cellulite, eczema, and atopic dermatitis. The ALA in flaxseed oil can improve skin quality, reduce skin cell inflammation, and help repair damaged skin cells.

One 12-week study published in the journal Skin Pharmacology and Physiology in 2011 found that flaxseed oil improved skin smoothness and hydration and reduced sensitivity to irritated and rough skin in 13 women.

Another 12-week study from 2009 found that flaxseed oil consumption had reduced skin redness and roughness in 45 women.

More research published in the journal Evidence-Based Complementary and Alternative Medicine in 2017 found that flaxseed oil reduced symptoms of eczema in mice, including itching, swelling, redness, and cracked or blistered skin.

The essential fatty acids in flaxseed oil also help improve skin texture and elasticity, as studies have shown it to benefit skin health and reduce rashes in both human and horse skin cells.

The omega-3 fatty acid content in flaxseed may reduce inflammation. In one study published in the journal ISRN Inflammation in 2013, flaxseed oil injections under the skin of rats had helped reduce inflammation and inflammatory markers, including prostaglandin E2, bradykinin, histamine, and leukotriene B4.

A systematic review and meta-analysis of 20 studies, published in the journal Nutrients in 2016, found that in obese people, flaxseed oil reduced levels of C-reactive protein—a marker used to measure inflammation.

Another study published in the journal Metabolism in 2013 indicated that flaxseed oil’s anti-inflammatory effects are equal to olive oil, and therefore, there was a similar effect on inflammatory markers in healthy, normal-weight adults.

Also, a study of 100 patients with carpal tunnel syndrome, published in the DARU Journal of Pharmaceutical Sciences in 2014, found that flaxseed oil had reduced inflammation and pain after a month.

7. May Prevent and Treat Cancer

Flaxseed and flaxseed oil may also prevent and treat various types of cancer. For example, a study published in the Journal of B.U.ON. found that consumption of 0.3 ml of flaxseed oil daily for 40 days had prevented the spread and growth of lung tumors.

Additionally, a 2014 review showed that flaxseed supplementation had reduced the risk of tumor growth in 32 people with breast cancer.

The ALA, lignans, and linoorbitides are responsible for many of the anti-cancer properties in flaxseed oil.

Flaxseed oil may both reduce the risk of diabetes and manage the chronic condition.

In one study of 62 adults with high fat levels published in the Journal of the American College of Nutrition in 2008, researchers found that 40 g daily of ground flaxseed helped improve insulin sensitivity. This is important since insulin resistance can cause diabetes and higher glucose levels.

Another study published in the journal Nutrition Research in 2013 found that daily flaxseed consumption had improved glucose control in postmenopausal women and obese men with pre-diabetes.

Other research suggests flaxseed oil reduced insulin levels in 60 women with PCOS (polycystic ovary syndrome)—a condition where women may have a higher risk of diabetes and higher insulin and blood sugar levels.

In this section, we will take a brief look at the characteristics of flaxseed oil vs. fish oil.

EPA is found in fish oil and fish, and it is needed for mental and physical health. DHA is important in a number of bodily functions that involve your immune system, brain, and blood vessels. You’ll find DHA in fish, fish oil, and shellfish.

ALA is only found in plants, such as hemp seed, walnuts, and flaxseed. In flaxseed oil, about 50% to 60% of the omega-3 fatty acids come in the form of ALA. When you consume flaxseed oil, the body converts ALA into EPA, and then DHA. This conversion is done via activity of enzymes called desaturases and elongases.

The conversion will also depend on your general diet and overall digestion, specifically on adequate levels of other key nutrients such as iron, zinc, magnesium, calcium, copper, biotin, and vitamin B6.

How to Use Flaxseed Oil

Now that you know more about the nutrition facts and health benefits, you’re probably wondering how to use flaxseed oil. It is a versatile oil that can be swapped for other oils in dips, sauces, and salad dressings. You can also add a tablespoon of flaxseed oil to shakes or smoothies to help you easily get flaxseed oil into your diet.

Flaxseed adds nutritional value to oatmeal or yogurt as well. Moreover, you can replace butter with flaxseed oil on potatoes, rice, or toast.

It is important to note that you should not cook with flaxseed oil because it doesn’t have a high smoke point, and can therefore form harmful compounds when exposed to high heat. Always store flaxseed oil in the refrigerator to preserve its freshness.

It is also ideal to consume flaxseed oil within eight weeks of opening it. If you don’t use flaxseed oil every day, it is best to purchase a small bottle of flaxseed oil.

You can also use flaxseed oil on the skin or hair to increase skin moisture and promote hair growth.

You can find flaxseed oil online or at the health food store. Purchase cold-pressed and organic flaxseed oil from a respected and recommended brand name.

Although it is likely safe and well tolerated in appropriate amounts, there are potential flaxseed oil side effects in large doses. For instance, two tablespoons of flaxseed oil or more daily can cause diarrhea and loose stools.

You should also not use flaxseed oil or other omega-3 fatty acid supplements if you are being treated with certain medications, including anticoagulants, blood sugar-lowering drugs, and cyclosporine, without first consulting a doctor.

Some studies show that diets high in ALA may increase the risk of prostate cancer and macular degeneration; however, more research is needed to draw an absolute conclusion. Pregnant women should also avoid flaxseed oil since it may increase their risk of premature birth. Also consult your doctor before using flaxseed oil if you are breastfeeding.

Taking fish oil and flaxseed oil at the same time may also cause the blood to become too thin. In addition, you will want to consult your doctor if you consume both flaxseed oil and fish oil.

If you take any other supplements, drugs, or have any other health concerns, consult your primary care physician before including flaxseed oil in your diet.

There is no doubt that flaxseed oil is an excellent plant-based source of omega-3 fatty acid, and specifically ALA. Consequently, about one tablespoon of flaxseed oil daily can have numerous health benefits. We’ve noted that flaxseed oil benefits heart health, treats constipation and diarrhea, lowers cholesterol, benefits skin health, helps with weight loss, reduces inflammation, protects against diabetes, and prevents and treats cancer.

Flaxseed oil can also be used in various ways. It can be added to smoothies, shakes, yogurt, oatmeal, potatoes, and rice, or applied to your hair and skin.