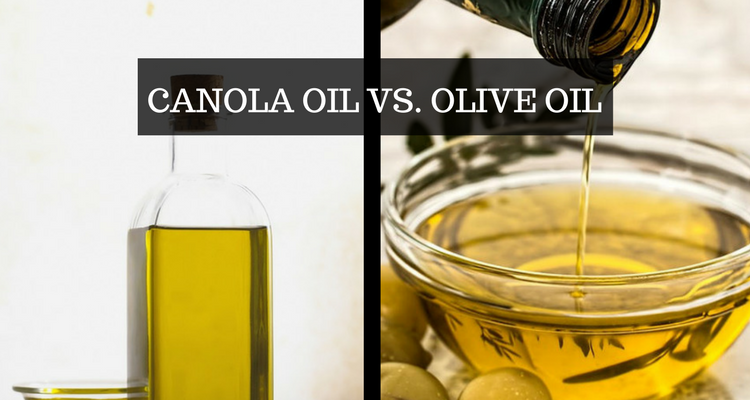 In our quest for a healthy lifestyle, we often search for ways to cook and eat healthy food. One of the most common recommendations by nutritionists often points toward removing oil from the kitchen completely or switching to a healthier option. The search then begins to identify the one that will fit the bill. In this article, we will look at Canola Oil vs. Olive Oil and see where they stand when compared based on certain critical parameters.

Understanding the difference between oils starts with the fundamentals. Let’s see how each is made to learn about their basic characteristics and key differences. The basic difference is the type of oil.

How is Canola Oil Made?

Canola oil is a vegetable oil that is made at high temperatures and apparently involves the use of toxic chemicals like hexane and bleaching agents to improve the color of the oil.

The entire process involves refining the oil at high temperatures, and this is prone to changing the omega-3 content and raising the trans fats and saturated fats to a large extent.

How is Olive Oil Made?

On the other hand, olive oil is fruit oil. As the name suggests, it is made by pressing ripe crushed olives to collect the juices that constitute the oil. This is often done at cold temperatures to keep the nutritional value intact. The constituents of olive oil make it a healthier option.

The extra virgin oil retains the flavor of the olives and hence is suitable only in dressings or added to a dish without heating, such as a dip. Cooking or baking in this oil may not be the best idea. For heating and cooking, pomace olive oil is used.

A comparison of the nutritional values of Canola oil and Olive oil is shown below:

As we can see from the table, the nutritional facts of Canola and Olive compared give us the details of the components.

The trans fatty acids in Canola make it an unhealthy choice. But the phytosterol in Olive oil prevents the buildup of bad cholesterol in our blood vessels and is hence good for our heart. On the saturated fat front, canola oil scores better as their percentage is lower than olive oil.

Olive oil scores better due to its other advantages like zero trans fat and slightly higher traces of vitamins E and K.

So how does the canola oil vs. olive oil comparison stack up in their respective culinary usage? Let’s compare it based on certain points such as taste and more.

As we know, olive oil comes in various grades, and extra virgin olive oil is the one made from the first pressing of olives on the same day they are picked from the tree. Naturally it retains the olive taste and has a peppery flavor.

As the grades go down further to purify olive oil which is the third or fourth pressing extract, the taste of olive is absent and has a relatively milder taste.

Canola oil is made from pressing canola seeds and refining it at high temperatures. After going through its refining process, the oil comes out as a mildly flavored. Canola oil does not pass on any particular taste to the food.

Olive oil has a low smoke point, and this makes it unsuitable for cooking, baking, or frying as it will give an undesirable and unpleasant flavor to the food if used in any of these ways.

Canola oil, on the other hand, has a high smoke point making it a good option for cooking, baking, and even deep frying. It can be called as a good all-purpose oil.

Can We Substitute Canola Oil for Olive Oil?

Replacing olive oil with canola oil is possible. You will lose the taste of the olives in the recipe and nothing else. However, you cannot use olive oil in place of the canola as the smoke points of both are different.

The usage is also different, and if you were to use olive oil to deep-fry anything, the taste would not be what you expected it to be.

A product called olive pomace oil, which is extracted from the pulp of olives after the first and the second press, has been successfully used in cooking, baking, and even deep frying.

It is extracted from the olive pulp using solvents and hence is believed to be unhealthy due to the presence of the solvents. Many consider it to be unhealthy and carcinogenic and is even banned by a few countries.

On the other hand, it is easily possible to add canola oil to your salad dressing as this will taste just fine. Depending on the usage and the cooking, these oils can be used as substitutes in some cases without any unwanted results and in some cases they cannot be exchanged at all.

Canola Oil vs. Olive Oil: Which Is Healthier?

Canola has less saturated fats as compared to olive oil and, the way it is produced also adds a few toxic chemicals to the same. This makes it unhealthy for usage.

Why then are people still using canola oil? Well, not everything is bad with canola oil apparently. It is less likely to increase the LDL or bad cholesterol in your body.

Olive oil has more saturated fats amongst the two. As a result, it is prone to cause vessel blockage by the build up of plaque in the arteries. However, the other benefits of olive oil on health are apparent through its manufacturing process and its natural origins as canola oil comes from rapeseed, a genetically modified plant grown under regulations.

Some argue that this is what makes canola oil healthier. The percentage of unwanted constituents such as erucic acid and trans fats are limited to below a certain percentage in the oil, as it is made in the controlled environment.

Who Is the Winner?

Actually canola oil vs. olive oil is a match drawn and neither are outright winners. Both have their own pros and cons. It is, however, a popular choice to switch to extra virgin olive oil (EVOO) to adopt healthy eating habits.

No doubt this is a good choice, however, a lot of things matter in the quest to a lead a healthy life. These include the manufacturers, ingredients used, the quantity consumed, overall lifestyle—exercise routines and stress management— and more. Simply switching oils will not give you the results expected.

“How Canola Oil is Made,” The Coconut Mama; http://thecoconutmama.com/how-canola-oil-is-made/, last accessed August 1, 2017.