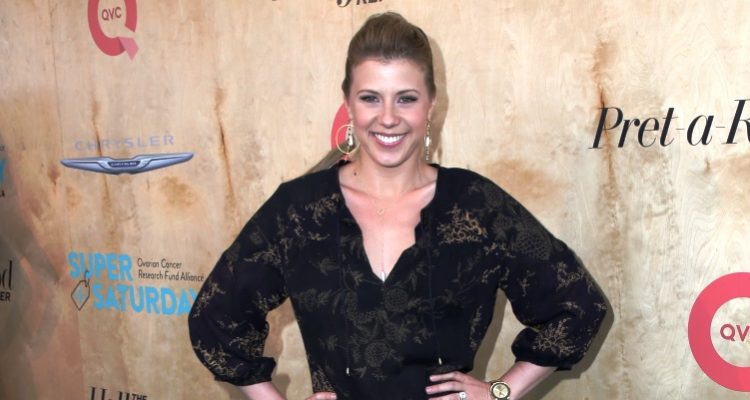 Jodie Sweetin is very excited about being one of the top trending actresses of 2016 and that Fuller House is one of this year’s top trending TV shows! She revealed her excitement through Instagram and posted this snap.

Her healthy diet and fitness has surely paid off!

Jodie Sweetin has more feathers in her cap. She recently posed for Maxim and her saucy pics will leave her fans wanting more!

The Fuller House star revealed her intention behind the sizzling photo shoot. “I wanted to do something that was a departure from Stephanie, but still a part of who I am,” she said. “I am an adult woman, and I think people kind of forget that when you’re so closely tied in with such a traditional family sitcom,” she continued.

She says doing something different is fun and said, “It’s fun to do something sexy and unique and a little more personal.”

When Full House came to an end in 1995, Jodie Sweetin was devastated and she felt that she had lost her family. As a result, she became addicted to drugs and alcohol. “Everything I had known from the time I was 5 years old suddenly ended, and it was like saying goodbye to a family I had loved very much. At such a young age, it really was a huge loss for me. I didn’t know how to grieve,” she told her DWTS partner, Keo Motsepe.

She tried overcoming her addictions by going to a rehab and swears by workouts to keep her healthy and relaxed.

Sweetin works out at least three times a week and does a lot of Pilates. She works with a personal trainer who inspires her to be fit. She says she doesn’t work out only to flaunt a toned figure but to feel healthy, as well. She finds exercising difficult when she’s travelling but she tries to stay active by moving around.

Her choice of workouts include swimming, lower back exercises, standing calf raises, pectorals, lunges, and planks. Her husband also wanted to lose weight and working out together keeps her motivated and focused. Post-pregnancy weight loss was a big challenge for her, however she slimmed down with rigorous post-pregnancy workouts.

She prefers cooking her own food rather than eating out as she knows what ingredients are in her meals. She Instagrams her healthy meals for her fans to see and tries to list out the ingredients of the dishes she prepares.

I totally killed it with dinner last night! Delicious brussel sprouts with bacon and balsamic… mmmm! Was a great side to @justinhodak_ steaks. Now, I'm on the road again and off to @slipperyrockuniversity in PA to speak tonight!! #busylife

In the above snap she is making delicious Brussels sprouts with bacon and balsamic, with a dash of olive oil and balsamic vinegar.

She treats herself every once in a while with foods like a guava pastries, Cuban espressos, lobster rolls, and fries. Sweetin also has a huge sweet tooth, but she handles it smartly. If she has a craving for desserts, she shares it with her friends—it helps her satisfy her cravings while limiting her intake.

Jodie Sweetin’s breakfast usually consists of a veggie omelet, low-calorie muffins, a breakfast burrito, granola cereal or whole grain cereal. For lunch she will have seasoned black beans and rice, or a low-calorie chicken fajita. She loves to eat Asian-style beef and broccoli stir fry, a grilled chicken breast with vegetables, or pasta fagioli soup. She also eats lots of fresh fruits and green veggies and drinks plenty of water.