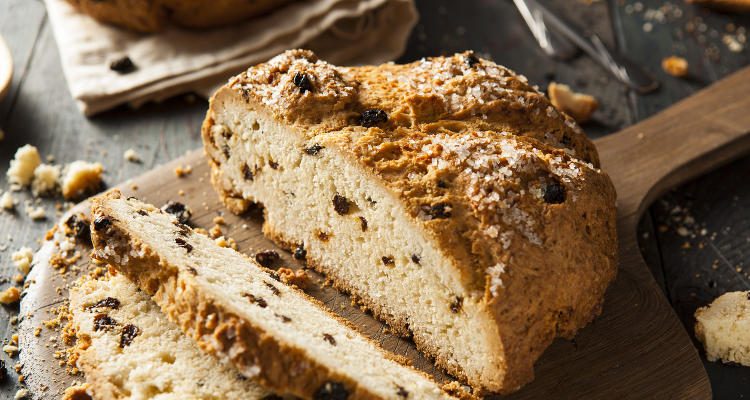 Make a well in center of the flour mixture and add the buttermilk. Mix the ingredients well. Next, add raisins and mix well again.

Shape the dough into ball with floured hands. Oil spray a cake pan and transfer the dough to it. Press the dough lightly and sprinkle 1 tablespoon of sugar on it.

Put the pan into oven and bake until brown, about 10 minutes. Let it cool for 10 more minutes. Transfer to a rack and serve warm.

Cut half of the potatoes in large dices and put them in a saucepan. Sprinkle some salt and add cold water up to 1 inch of the pan. Broil the potatoes until tender.

Meanwhile, grate the remaining potatoes, and add a pinch of salt. Place it in a mesh strainer and press it with a spatula. Remove all the water and set aside.

Transfer the boiled potatoes to a bowl, add ¼ cup of the milk, and mash until smooth. Mix the grated potatoes with the mashed potato mixture. Whisk egg, remaining ½ cup milk, flour, pepper, and remaining teaspoon of salt in a bowl. Add the potato mixture and blend well.

Grease a non-stick pan over medium heat. Put three dollops of batter into the pan and spread it with a spatula. Cook for four to five minutes and flip. Repeat the process.

Place on a baking sheet and set in the oven to keep warm.

Chop the potatoes into large pieces. If you’re using stock cubes, dissolve it in boiled water.

Grill the sausages and bacon carefully—do not dry them out. Drain them and chop them up into small pieces.

Layer an ovenproof casserole with the onions, bacon, sausages, and potatoes. Season each layer with pepper and parsley. Top it with the bouillon mixture.

Place it on heat and bring the liquid to boil. As the liquid bubbles, instantly cover it with the lid. Put the casserole in the oven and cook it for four to five hours. Keep checking the liquid quantity. Add more if needed.

First, boil the potatoes. Transfer them to a bowl and add butter. Mash thoroughly. Stir in hot milk and add a few grinds of black pepper. Mix well.

Boil cabbage in unsalted water. Add two tablespoons of butter and cover it with a lid for two minutes. Drain the water and cut them into small pieces.

Garnish with a dollop of butter and finely chopped parsley.