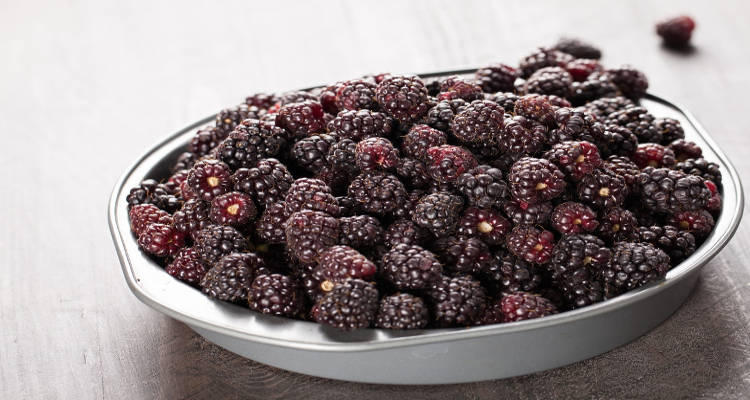 A boysenberry (Rubus ursinus) is a bluish purple-colored, juicy, and large berry that is a cross among the loganberry, Pacific berry, American dewberry, common blackberry, and European raspberry. This tangy, tart berry can be enjoyed on its own or in sauces, jellies, jams, syrups, desserts, and smoothies.

In this article, we will detail the history of boysenberry, as well as more on its taste. Boysenberry fruit is loaded with nutrition, and we’ll cover all the nutrition facts and reported boysenberry benefits. We will also include some tasty boysenberry recipes you need to try.

How did the history of the boysenberry unfold? According to reports, during the 1920s, in Napa, California, horticulturist Rudolph Boysen experimented with various crosses between berries.

Boysen later moved to Orange County, where he planted berry vines on his in-law’s farm in Anaheim, California. Boysen had obtained the loganberry-dewberry parent from the farm of a man named John Lubben. In 1923, Boysen’s berry hybrid was successful, but seemingly not commercially viable.

Towards the end of the decade, George M. Darrow of the United States Department of Agriculture (USDA) began to trace stories of a berry grown on Boysen’s farm. Darrow had help from a farmer named Walter Knott—a known berry expert.

The two found that Boysen had abandoned the idea of the boysenberry as a crop and sold his farm after breaking his back in an accident years earlier.

Undaunted by this discovery, Knott and Darrow went to Boysen’s old farm and found a number of frail berry vines that had survived in a field with weeds.

The vines of the boysenberry plants were transplanted and nurtured back to health at Knott’s farm. The Knott family restaurant and pie business eventually grew into Knott’s Berry Farm in Buena Park, California, due in part to the berry’s popularity.

Knott is considered to be the first to commercially cultivate the berry in Southern California, and he first began selling it in 1932 at his farm stand. Knott would name the fruit after Boysen.

What does boysenberry taste like? The boysenberry has a uniquely rich, juicy, tart, and sweet flavor that derives from its complex ancestry. It has the wine-flavored tang and lusciousness of three native blackberry species, while the floral aroma and sweetness come from the raspberry.

From a mineral perspective, boysenberry contains high amounts of manganese, as well as some iron, calcium, magnesium, potassium, phosphorus, copper, and zinc.

The following is a comprehensive boysenberry nutrition chart with details on one cup of frozen, unsweetened berries:

As a result of its strong nutritional content, there are many promising boysenberry benefits. For instance, the vitamin K in boysenberries may help you avoid kidney stones. Vitamin K also benefits bone strength and therefore reduces the risk of osteoporosis.

The vitamin C and vitamin A content also helps prevent and treat vision-related disorders. Moreover, boysenberry is thought to be useful for diabetes, weight loss, and gallstones. Pregnant women can also benefit from its use.

In this section, we will examine many other important health benefits of boysenberry.

Boysenberries are very beneficial for your brain. This is due to the antioxidant anthocyanin, which could potentially protect against oxidative damage, boost memory, and prevent Alzheimer’s disease and cognitive decline.

Other nutrients in boysenberry that are beneficial for brain health include folate and potassium. Potassium has been found to increase blood flow to the brain and enhance concentration, neural activity, and cognition.

The vitamin B6 in boysenberry is also beneficial for those with depression.

Boysenberries have long been known to treat digestive issues such as constipation. The significant amount of fiber in boysenberries helps make it easier to manage bowel movements.

Like a lot of berries, boysenberry is considered great for heart health. Part of this is due to the antioxidant vitamin C content in boysenberries. It’s also due to the great potassium-sodium ratio. It contains 183 mg of potassium, compared to 1.3 mg of sodium.

As a result, boysenberry may help the blood vessels relax and reduce the risk of high blood pressure.

In a study published in the Journal of Nutritional Science and Vitaminology in 2014, researchers found that the polyphenolic compounds in boysenberry juice may help increase nitric oxide concentration through the aortic endothelial nitric oxide synthase activation in hypertensive rats.

In other words, boysenberry may be beneficial for heart health, including lowering blood pressure.

Another study from 2015 suggested that the polyphenols in boysenberry juice can help inhibit plasma triglyceride absorption levels in rats.

The anti-inflammatory properties of boysenberries help boost immunity and fight and prevent different types of cancer, such as malignant esophageal and colorectal tumors. One of those beneficial nutrients in boysenberries is vitamin C, which can help the body fight against infections as well as eliminate cancer-causing free radicals.

The amount of manganese in one cup of boysenberries is 0.72 mg, and this covers 36% of your recommended daily intake. Various studies have suggested that people who have seizures also have lower manganese levels.

That being said, researchers are still studying whether seizures cause low manganese levels or a manganese deficiency is the cause of seizures.

Lung fibrosis has a negative impact on lung function in cases of chronic asthma. One 2016 study found that boysenberry consumption supports the development of fibrolytic lung macrophages with the airway capacity to promote balanced lung repair, plus limit lung damage in chronic asthma and other pulmonary diseases.

Since boysenberries spoil quickly, you will want to use them right away. The berries are excellent on their own, but they are also delicious in jams, jellies, tarts, syrups, sauces, smoothies, desserts like boysenberry pie or tart, as well as boysenberry tea.

Read on as we run down a variety of delicious boysenberry recipes.

For the pie dough:

For the filling: In a saucepan on low heat, add the boysenberries and cook slowly for five minutes. In a bowl, combine the gelatin, salt, and sugar. Add this sugar mixture to the saucepan, and cook for another five minutes. Stir often to avoid burning the filling. Set it aside, and let it cool.

For the jam: Boil the boysenberries, apply, and sugar for about 10 to 15 minutes. Add the lemon juice and boil for two more minutes, and bottle this jam while it is still warm.

Boysenberry is a hybrid cross of loganberry, European raspberry, American dewberry, Pacific berry, and common blackberry. The boysenberry is known for its tangy and sweet flavor and distinctive reddish blue, dark purple color.

As a result, boysenberry is excellent in jellies, jams, smoothies, and desserts. We’ve also provided some delicious recipes for syrup, tart, and boysenberry pie.

The berry is loaded with nutrients such as manganese, vitamin K, and folate. And as you read through this article, we detailed the many potential boysenberry benefits. For instance, boysenberry may help regulate blood pressure and improve heart health overall; benefit digestive, brain, lung, and immune health; and also reduce your risk of epilepsy and cancer.