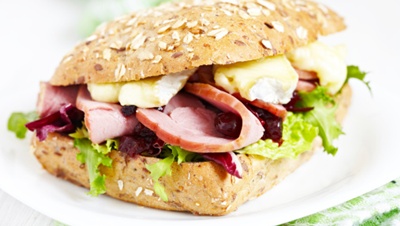 We all try to make healthy choices when it comes to what we eat, but sometimes when you’re in a hurry or on the go, dropping into a fast-food restaurant is a good option.

OK, we know it’s not the best option, but we would like to feel assured that it won’t put us in harm’s way, despite the added calories and sodium. In light of recent headlines over certain fast-food subs, though, you may want to start packing your own lunch.

FDA-Approved Chemicals Hiding in Your Food

The Food and Drug Administration (FDA) has approved an ingredient known as azodicarbonamide (ADA) to be used in small amounts in food. Check your product labels, please!

What exactly is ADA and why the fuss? It’s used as a bleaching agent for flour and a dough conditioner, so it’s often a key ingredient in baked goods that gives bread the fluffiness we’ve come to love. That same spongy bounce you also find in yoga mats—yes, ADA is used in yoga mats and your sandwich.

Studies on ADA and humans don’t paint a pretty picture. The World Health Organization (WHO) has linked ADA to asthma, chronic inflammatory disease and skin irritations in workers exposed to the chemical in production facilities. Other lab studies connect ADA with high levels of toxicity and mutated bacterial systems.

So why is this ingredient safe for consumption, even in infinitesimal amounts? What is the cumulative effect of ingestion over time? Who’s to say? The FDA is collecting more information surrounding ADA.

But have we become so accustomed to the look of what we eat that we don’t care how it achieves its fluffy appeal? Not true! We do care about what we eat, and thousands have signed an online petition to banish the harmful ingredient from our food.

Serving up ADA at a Restaurant Near You

Subway has been thrown in the center ring over the issue and made a statement to remove the use of ADA within its bread. Starbucks has told news outlet CNBC it plans to discontinue the use of the toxin. Other restaurants, though, are not so open to change.

A representative for McDonald’s told CNBC that the restaurant chain discloses all ingredients to its customers, so the choice is theirs. Other fast-food chains using ADA include Burger King, Wendy’s, Jack in the Box and Arby’s.

Still concerned about healthy eating? Know the facts when it comes to grabbing a quick bite. If you don’t have time to put together a homemade meal, you want to be informed about your take-out options.