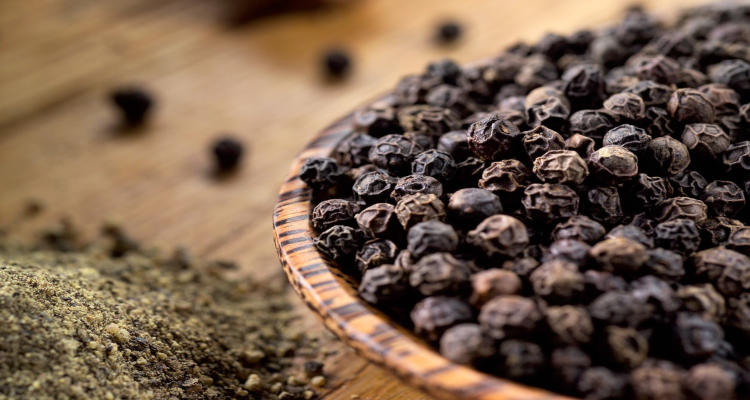 What Is Black Pepper?

Black pepper can be used as a kitchen spice, but did you know it’s also a popular form of medicine? According to research, black pepper benefits those with high blood pressure, cancer, and diabetes. It may also help with weight loss and cognitive function.

Black pepper is considered the king of spices. However, black peppercorns are actually a tiny fruit of the flowering vine called Piper nigrum, which comes from the Piperaceae family. Peppercorn vines grow as high as 13 feet tall, and often grow in tropical regions.

In this article, we will explore the history and origin, flavor, nutrition, uses, and health benefits of black pepper. We will also detail how to grow black pepper.

History and Origin of Black Pepper

Pepper is native to Southeast Asia and the countries of the Indian subcontinent, particularly Southwest India and a southern state in India called Kerala.

Hundreds of years ago, traders called black pepper the “king of the spices.” It was also considered a luxury item in medieval Europe.

In Rome and Greece, black pepper was so valuable that it was even used as currency. When the Goths defeated Rome in 410, a ransom of 3,000 pounds of pepper had been demanded and accepted as payment for things such as taxes and rent during the Middle Ages.

In the U.S., Salem, Massachusetts, was once a key port in the world pepper trade, and where a number of America’s first millionaires were born. Over time, black pepper became less expensive and more accessible, and this led to pepper being included in many different recipes and cuisines from various cultures.

Black pepper has a subtle zesty and spicy flavor that enhances, rather than overpowers, other flavors and spices. The active ingredient in black peppercorn that is responsible for its characteristic heat is called piperine.

When you add large amounts of black pepper to a dish, the heat will eventually become the main flavor. Other spices and herbs should be used to prevent the heat from overpowering a dish, while also complementing black pepper’s flavors. Piney, earthy, sharp, and citrusy undertones are also associated with black pepper.

What herbs can enhance the flavor of black pepper? Coriander and cardamom can add to the citrusy taste and rosemary will add to the pine flavor, while anise seed will give you a subtle sweet flavor.

Black pepper can be added to many different dishes. For instance, it can be blended into stews, soups, salad dressings, sauces, and marinades; rubbed onto meat before cooking; and sprinkled on omelets. Bakers will even use it for biscuits and breads. You also likely have a pepper grinder on hand to finish off your dishes, including pasta, mashed potatoes, or meat entrees.

The following is a comprehensive black pepper nutrition chart with information for one tablespoon, or six grams, of ground black pepper.

What are the benefits of black pepper? Black pepper contains anti-inflammatory, antibacterial, antimicrobial, and antioxidant properties that are important for human health.

Read on to learn more about the black pepper benefits in further detail.

Black pepper increases the release of hydrochloric acid, which helps improve digestion. Gastric acid is a component in hydrochloric acid that prepares food for digestion and absorption in the intestine.
The piperine in peppercorns can help produce gastric acid, and this can help eliminate gas, indigestion, and heartburn. Black pepper also strengthens the digestive tract, therefore reducing the length of time it takes for food to travel along the digestive tract.

The piperine in black pepper has been found to improve cognitive function, protect against neurodegeneration, and reduce memory impairment in rats with Alzheimer’s disease, according to research published in the journal Food and Chemical Toxicology in 2010.

It is thought to prevent Alzheimer’s disease by healing nerve damage and memory impairment in the hippocampus of the brain.

The piperine in black pepper can exert antitumor activity, which can help prevent and treat various cancers, such as breast cancer, prostate cancer, colorectal cancer, melanoma, and osteosarcoma.

Piperine has been found to induce cell death in triple-negative breast cancer cells through the mitochondrial pathway, suppress tumor growth in mice with prostate cancer cells, and inhibit the activity of human rectal adenocarcinoma cells.

A study published in the journal Molecular Carcinogenesis in 2015 also suggests that piperine may help treat colon cancer. The study found that piperine inhibits the growth of HT-29 colon carcinoma cells and even induces cell death in certain cancerous cells.

The anti-inflammatory, antibacterial, and expectorant properties in black pepper can help treat respiratory conditions such as asthma, labored breathing, sinusitis, nasal congestion, coughing, and colds. The piperine in black pepper may also suppress the development of disease-causing bacteria.

The antioxidant properties of black peppercorns may help treat diabetes and stabilize blood sugar levels. A study published in the journal Proceedings of the National Academy of Sciences of the United States of America in 2016 found that piperine helps the up-regulation of the metabolic rate of resting muscle, and this can treat diabetes and combat obesity.

A 2013 study published in the West Indian Medical Journal in 2015 found that black pepper oil naturally inhibited two enzymes that break down starch into glucose, and this may in turn regulate blood sugar and delay glucose absorption.

Another study published in the journal Advances in Pharmacological Sciences in 2013 found that the phenolic and antioxidant content in black pepper essential oil helped fight type 2 diabetes.

The piperine in black pepper reduces blood pressure through calcium channel blockade. One 2010 study of nitric-oxide-deprived rats found that piperine could decrease the severity of hypertension caused by oxidative stress.

Another study published in the Journal of Cardiovascular Pharmacology in 2008 suggested that the phenolics and antioxidants in black pepper essential oils can help treat hypertension.

Can You Grow Black Pepper in Your Garden?

You should water the plant on a regular basis; however, do not overwater the plant or let it dry out since the peppercorn plant is susceptible to root rot. Also fertilize the plant every one to two weeks.

You will also want to stimulate your peppercorn plant by keeping it under the right light above 65 degrees Fahrenheit. When it comes to growing a peppercorn plant, remember to be patient. It will take at least two years before the plant produces flowers that lead to peppercorns.

Freshly ground black peppercorns are delicious, and great in everything from pasta to potatoes to salad dressing, sauces, and more. This is because black pepper has a distinct and sharp zesty, earthy, piney, citrusy, and spicy flavor that enhances your food.

Once considered a luxury spice, this tiny fruit is also packed with nutrition and health benefits. For instance, black pepper is high in fiber, manganese, iron, and vitamin K.