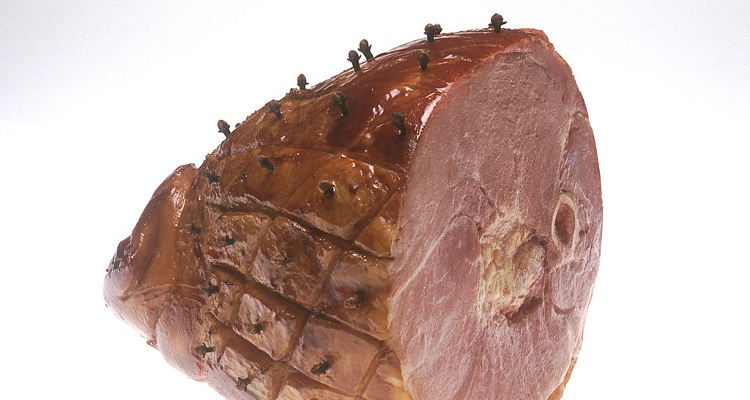 Ham is the hind-leg of pork that is preserved through salting, smoking, or wet curing. Several ingredients may be used to provide flavoring and preservation of ham. It can be available as ready-to-eat or it may require cooking. So, is ham healthy? To answer that question, we must first take a look at its nutrition facts. 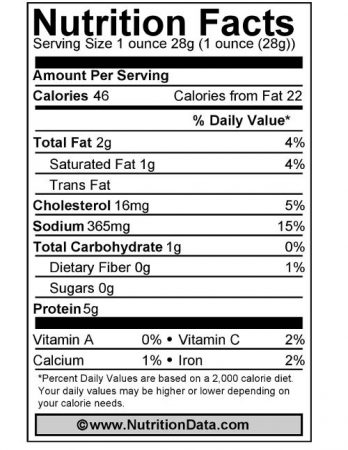 A slice of 28 grams of ham contains 46 calories and 22 calories of it come from fats. Here are the complete nutrition facts of ham in detail.

One serving or 28 grams of ham has about five grams of protein, which is fairly good. Protein is very important and is used to build and develop muscles, tendons, organs, and skin.

The Dietary Reference Intake (DRI) is 0.36 grams of protein per pound, or 0.8 grams per kilogram of body weight. The protein intake for a man with a sedentary lifestyle should be 56 grams per day, whereas a woman with an inactive lifestyle should consume about 46 grams.

Although ham is rich in protein, you need to keep in mind that the same serving contains 365 milligrams of sodium, which provides 15% of the recommended daily intake. A high-sodium diet may increase blood pressure and the risk of heart disease. According to the FDA, an individual shouldn’t consume more than 2,300 milligrams of sodium per day.

Adults above 50 years and those with cardiac issues should limit their sodium intake to 1,500 milligrams per day to avoid the risk of heart disease, kidney malfunction, or stroke.

Studies carried out in Italy and published by the National Center for Biotechnology Information, show that excess salt consumption may increase the risk of stomach ulcers, which is a risk factor for stomach cancer. Salt may be carcinogenic due to its reaction with the bacteria, Helicobacter pylori.

Ham has a good amount of thiamin and also has vitamin B6, B12, and C. Consumption of thiamin promotes digestion, improves memory, and has anti-aging properties. Vitamin B6 is necessary for muscular and nervous system function. The recommended daily intake of vitamin B6 for an average adult under the age of 50 is 1.3 milligrams.

Vitamin B6 helps maintain a healthy digestive system, and may help protect against stroke and high blood pressure. However, if we compare these stats to other fresh lean meats such as chicken, we realize that the same serving size of cooked chicken also has a good amount vitamin B compounds.

Additionally, it also has vitamin A compounds such as retinol, and traces of vitamins E and K. All of these are absent in ham. Also, chicken has much lower quantities of sodium and cholesterol compared to ham.

Is Ham Good for Bodybuilding?

Is ham rich in protein? Yes, it is. According to the U.S. Department of Agriculture, a three-ounce serving of cooked ham contains 130 calories, with 16 grams of protein and six grams of fat.

Proteins are the building blocks of the body and ham is a rich source of protein. However, there are better and healthier sources of protein. Ham has a higher protein-to-fat ratio than oily fish and 85% lean ground beef. Consuming ham is a good option when you need a change or when no other protein source is available.

Ham is a processed meat. Processed meats may increase the risk of chronic diseases such as high blood pressure, cholesterol, heart problems, and bowel and stomach cancer. Additives such as sodium nitrite in processed meats turns into harmful N-nitroso compounds, and are cancer-causing substances. According to a study published in the European Journal of Cancer Prevention, eating processed meats may lead to cancers of the stomach, rectum, pancreas, colon, lung, prostate, testis, kidney, and bladder.

In the book, Built for Show, trainer Nate Green classifies ham as a category C food. This means that it isn’t better than fresh protein sources, but is definitely better than gorging on junk and fried foods. Ham is also better than other fatty and processed meats, such as pepperoni and sausages.

According to Harvard Medical School, you should have a maximum of two to three ounces of ham in a week. Rather than the processed ham, you can opt for a joint of ham and cook it with minimum sodium. When packed with salad in sandwiches, it can be a healthy and protein-rich breakfast. Ham can also be added to soups.

Is Ham Healthier Than Turkey?

These include saturated fats, cholesterol, sodium content, and other elements that when consumed in excess, are likely to be harmful to our body. According to a study published in The American Journal of Clinical Nutrition, protein is more satiating than carbohydrates or fat.

Dark meat turkey has higher quantities of iron, calcium, phosphorous, zinc, and copper compared to ham. Turkey also contains vitamin B6, E, K, niacin, riboflavin, and omega-6 fatty acids. The sodium content in turkey is 79 milligrams, while that in ham is 1,304 milligrams. So, if you need to choose between ham and turkey, always go for light meat turkey.

How to Choose a Healthier Ham

According to the World Health Organization’s International Agency for Research on Cancer, consuming processed meats causes colorectal cancer. Joy McCarthy, nutritionist and author of Joyous Health, says that you can have good-quality meat from grass-fed animals or organic meat once a week. Such animals are fed food which is free of pesticides. Animals raised on a pasture have a higher ratio of omega-3 fatty acids.

Processed meats should be consumed occasionally and you should always avoid the prepackaged variety. Smoking and curing ham increases its sodium content. If you do choose to consume it, you should avoid adding sauces to prevent increasing the sodium content further.

In conclusion, you may occasionally indulge in ham, but in moderation of course. You should always opt for a fresh protein option like chicken, eggs, and fish. These have a lot of other essential nutrients, and are healthier for you, too.