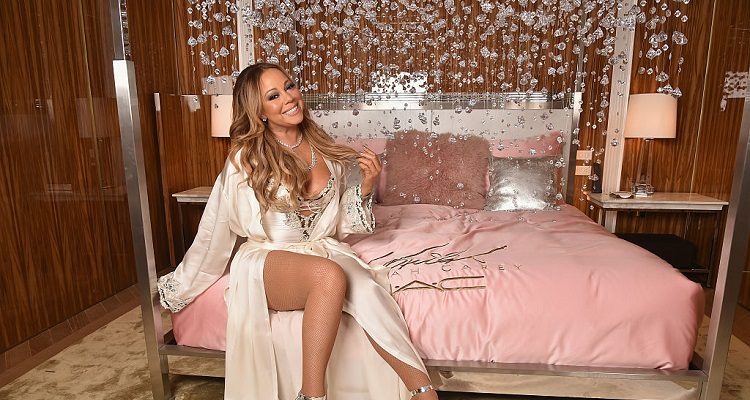 Stunning singer Mariah Carey is reportedly getting serious with beau, Bryan Tanaka. She is currently on a romantic vacation with Tanaka in Aspen. She arrived in Aspen on December 19 and is reportedly planning to remain there until her performance on ABC’s Dick Clark’s New Year’s Rockin’ Eve on December 31 with Ryan Seacrest in New York City.

It was probably a festive time with Carey and Tanaka spending Christmas together. A source for Entertainment Tonight revealed, “She’s into him now. He gets along really well with the twins, Moroccan and Monroe.”

Carey took to Instagram and posted, “Getting into the Christmas spirit with this exquisite tree in a beautiful home for our family! Courtesy of @airbnb.” The photograph reveals her incredibly fit body, and she looks stunning.

Getting into the Christmas spirit with this exquisite tree in a beautiful home for our family! ?☃️ Courtesy of @airbnb

Here is another post, which was captioned, “Merry Christmas everybody! I’m making my favorite sauce and I hope you’re enjoying the Yuletide cheer!”

This video was quite a treat for her fans to see, with the “All I Want For Christmas” singer spending some quality time with family during Christmas. The video received 6,200,000 views.

Merry Christmas everybody! I'm making my favorite sauce and I hope you're enjoying the Yuletide cheer! ????

Tanaka and Carey were spotted shopping together at high-end store, Moncler, in Aspen. The stunning diva stepped out for some last-minute shopping on December 24 in a green mermaid gown.

It was reported, “They walk around holding each other’s hands and are always very affectionate. [They’re] always smooching.” The ET source also added, “She bought him lavish designer Christmas gifts from the Aspen boutiques.”

On her forthcoming Dick Clark’s New Year’s Rockin’ Eve performance, Carey said in a statement, “I am so excited to return to Dick Clark’s New Year’s Rockin’ Eve With Ryan Seacrest and feel blessed to be a part of this year’s magical celebration.” She added, “I can’t wait to perform once again for my incredible fans as we ring in the New Year together live from Times Square.” Rumors are swirling that Tanaka will be Carey’s New Year’s kiss, after her performance.

The stunning diva has an incredibly fit body. What is her fitness regimen? What diet plan does she follow? Keep reading to find out more about her workout and diet regimens.

The super-fit singer, who had a tough pregnancy, has an encouraging weight loss journey. In an appearance on OWN’s The Rosie Show, she said, “The whole point of this is not just like: ‘Oh, hey, look at me and my weight loss, I’m fantastic.’ It’s really health…”

When it comes to her diet, she told E! News, “It’s really hard… my diet, you would hate it,” she added, “All you eat is Norwegian salmon and capers every day. That’s it.” Nutritionists believe that though salmon and capers can make a good pairing, they would not be considered as traditional diet foods.

Salmon is rich in omega-3 fatty acids could help to reduce risk for heart disease, helps in fighting depression, and also is great for healthy skin and hair. But capers are high in sodium and could cause bloating.

Carey’s favorite foods also include cheese. She also has some Brie on low fat crackers as a snack occasionally. Her favorite foods list includes baked salmon, chicken salad (with light mayo or some mustard), and sushi.

Her diet plan is said to include an intake of 1,500 calories per day. She likes to include plenty of fruits, vegetables, a high-protein diet, and a low carb intake.

Her meal plan could include spinach, raw veggies, omelets, swordfish, and bread. When it comes to her protein foods, she reportedly likes to include fish, steak, chicken, and eggs.

Carey has an enviable hourglass figure, which she maintains by following a three times per week workout regimen. The 46-year-old diva worked hard to stay in shape after her pregnancy. She told Us Weekly, “I’m proud of how hard I worked to get my body back…I had to do this for me.”

She also includes workouts with weights, stretching, and ball exercises. Her workout routine also includes some resistance training. She also likes to walk, which she finds is a good cardio workout.

Mariah Carey looks all geared to welcome the New Year with beau, Tanaka. Her fitness philosophy is encouraging, and fitness enthusiasts looking to stay in shape should definitely think of adopting her philosophy.