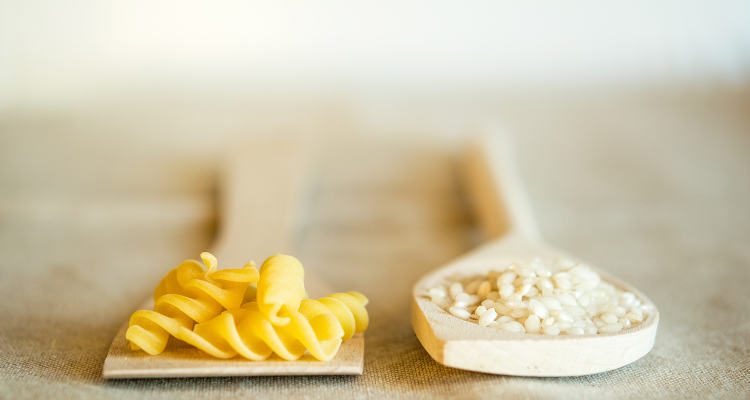 Pasta and rice are two popular foods that form the base of many dishes. They are included in daily meals by people in different parts of the world, and are considered staple food items. But are they healthy? Which is healthier, pasta or rice? Both share similar nutrition values, but do the pasta benefits outweigh those of rice? In the battle of pasta vs rice, pasta wins the race by a small margin in terms of the amount of nutrients per serving. However, rice benefits health as well.

To begin with, pasta and rice are high in carbs, and are not ideal for a low-carb diet. Comparatively, rice contains less carbs than pasta. Therefore, in a weight-loss diet, you can include a small portion of rice. 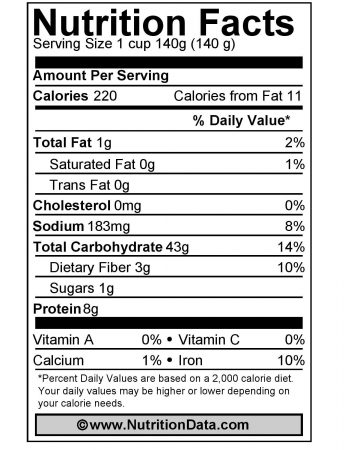 Rice and are both staple foods in different parts of the world. Rice is popular in many Asian countries as a staple food, and has been adopted by most countries in the world. Pasta is a staple food in Italy and is widely eaten in many countries, although not as a staple food. Both are a great source of energy. Over the last few years, these two popular food items have been frowned upon by most nutritionists and health professionals. However, the fault lies in their consumption patterns, and the ingredients added to them while cooking. 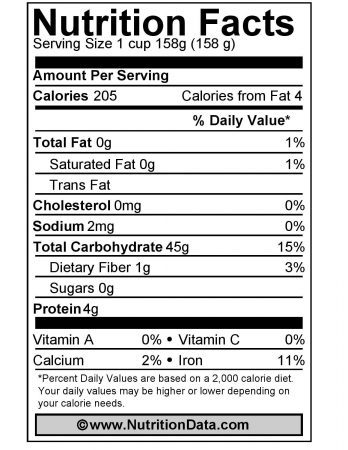 We have done a comparative analysis between white rice and corn pasta. Primarily, one is a naturally grown whole grain, and the other is made out of some type grain, or a combination of grains.

Neither pasta nor rice is a complete protein food, although both do have some amount of protein. You can have a complete protein meal by complementing rice or pasta with healthy vegetables and other protein-rich foods, like lentils, fish, seafood, chicken, or lamb.

Pasta contains a higher amount of dietary fiber than rice. Dietary fiber is a beneficial type of carbohydrate that promotes digestion, increases metabolism, slows down the release of sugars in blood, and even benefits heart health. One cup of cooked rice has only 0.6 grams of dietary fiber, while the same amount of pasta will provide 11.6 grams of fiber.

Here, we have considered white rice. However, brown rice, which has gained popularity over the last few years, has a good amount of fiber, as it is inclusive of bran and germ. Similarly, we have considered corn pasta in our comparison, but pasta made from durum wheat or other whole grains may contain more amounts of fiber.

Whole wheat pasta is a source of carotenoids, lutein, and zeaxanthin. Brown rice has some plant compounds that are beneficial for our health, however this it not so with white rice. This includes rice bran lignans, ferulic acid, and 2-acetyl 1-pyrroline (2AP). Lignans are converted into enterolactone by the gut bacteria.

Research shows that enterolactone is a phytoestrogen which may benefit cardiovascular health, reduce the risk of breast cancer, and have other health benefits. However, more research is required in this area. Ferulic acid acts as an antioxidant, while 2AP gives fragrance to certain types of rice. A phytonutrient called phytic acid isn’t favorable to health, as it hinders the absorption of essential dietary minerals like iron and zinc.

Pasta vs Rice: Which Is Healthier to Eat?

Pasta and rice are nutritionally quite similar. But they differ in composition. Rice is primarily composed of carbs found in the form of starch. About 90% of its total dry weight and 87% of the total caloric content in rice is starch. On the other hand, pasta provides good carbohydrates. A cup of white pasta contains 43 grams of total carbohydrates, while a serving of one cup of whole wheat pasta contains 37 grams of total carbs.

Pasta contains more dietary fiber than rice. A serving of one cup of whole wheat pasta will provide 6.3 grams of dietary fiber, while an equivalent serving of white pasta gives 2.5 grams only. Rice also contains a fair amount of fiber. When unpolished, rice is richer in fiber. This is known as brown rice and is currently more popular than the white rice. A cup of boiled brown rice contains 3.5 grams of fiber, while a cup of boiled white rice contains 0.6 grams.

Additionally, rice is cholesterol-free and could maintain blood pressure. Cooked rice in its elementary form is sodium free, and so it is harmless to people with hypertension and high blood pressure. In this way, rice improves heart health as well.

Another wonderful quality of rice is that it has rich amounts of resistant starch. Resistant starch is useful to the beneficial bacteria in the gut, and stimulates its growth. Thus, it promotes colon health and improves bowel movements. Brown rice can potentially reduce the risk of irritable bowel syndrome (IBS) and diarrhea.

White and whole wheat pasta are excellent sources of minerals like selenium and manganese. Selenium is a trace mineral with antioxidant properties that can protect cells from oxidative damage. In addition, manganese is beneficial to bone health. It metabolizes carbohydrates and regulates blood sugar, too.

Pasta is also rich in folate and contains a good amount of carotenoids, like lutein and zeaxanthin. These carotenoids contribute to our overall good health, especially the eyes. Rice does not have carotenoids, but it does have folate, selenium, and manganese.

High consumption of white, sticky rice could increase the risk of type 2 diabetes since it is easily digestible. However, long-grain rice such as basmati has amylose. This is a type of carb known to slow down the digestion of starch, and thus, is considered good fiber.

While in the epic battle of pasta vs rice, it is difficult to declare one better than the other. Both are healthy and satisfying if consumed in moderation. As mentioned earlier, the way you cook and consume rice or pasta matters greatly. You can keep boiled pasta or steamed rice as the base of a dish rich in vegetables, lean protein, and healthy fats to enjoy the wholesomeness of the dish.

Here are two healthy recipes as ways to include pasta and rice in your diet.

Heat one tablespoon of vegetable oil in a pan over medium heat. Whisk together the egg and egg white, and add a pinch of salt and pepper. Add it to the pan, and cook it until scrambled. Transfer the contents to a plate.

In the same pan, add the remaining vegetable oil and sesame oil. Add the scallions, cabbage, carrot, garlic, and ginger to the pan. Sauté them for one to two minutes.

Next, add the rice, and fry it with the vegetables for two to four minutes. Keep stirring the rice until it becomes crispy. Add the soy sauce and the scrambled eggs to the rice, and cook for another minute.

In a large bowl, put some cheese and watercress. Pour some hot pasta water over the watercress. Place tomatoes in a colander and drain the pasta over the tomatoes for a quick blanch. Toss all the ingredients together, season with pepper and olive oil before serving.