Home > Advice > The Health Risk Lurking in Your Canned Food? 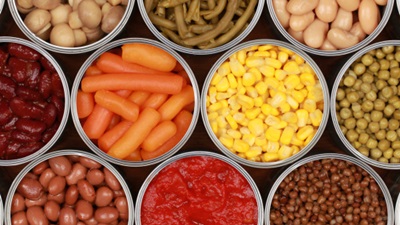 For nearly 200 years, we’ve used cans to package our food, without barely a thought about its safety or impact on our health. But how safe is canned food, really?

Some of the first tin cans were known to have caused lead poisoning in the 1940s, because they were sealed with lead soldering. In today’s society, the tin can is still considered detrimental to health, considering the lining of most cans has chemicals, phthalates, and bisphenol-A (BPA).

Several places worldwide are aware of the chemical dangers, as Canada and the European Union have banned BPA in baby bottles. Canada was the first country to recognize BPA as a toxic substance in 2010. BPA is currently under review by the U.S. Food and Drug Administration.

What are the dangers of canned food, and how does BPA and phthalates affect your health?

The Dangers of Tin Cans

Why are phthalates and BPA found in cans in the first place?

Phthalates act as plasticizers, helping to increase the durability and longevity of the can. Phthalates can also be found in various products such as waxes, printing inks, children’s toys, and even your washing detergent.

Both phthalates and BPA have been named as so-called endocrine disruptors. This is because they mimic the body’s hormones, and could have an effect on the body at minute concentrations.

BPA is considered toxic at low doses, according to the Environmental Working Group’s list of over 100-peer reviewed studies on the chemical.

MORE: 3 Reasons BPA Exposure is Dangerous to Your Health

BPA can be found in many tin can plastic linings, which can be transferred to the food. The inside of canned food is then covered with an epoxy coating to prevent food spoilage.

This same chemical is also used in plastic bottles, sports helmets, and automotive coatings. When tin cans are stored in warm areas for long lengths of time, the greater the chance BPA will leach into the food products.

Campbell’s Soup reported they will be eliminating BPA lining from its cans by 2015, although they currently don’t have a sustainable liner alternative.

What Canned Food Can I Buy?

It is best to purchase canned food that is BPA-free. I’ve found that the company Eden Organic Foods makes several reputable organic food products such as beans and vegetarian chili found in cans, boxes, and in bulk.

However, there are even questions concerning Eden’s BPA-free cans, such as the safety of the used chemical liner, made by the company Vaspar.

The chemical is a non-epoxy based coating, which has consistently been labeled safe by the FDA. However, the name in the chemical in the liner isn’t public information.

It is best to eliminate the use of canned food altogether, especially for legumes. Beans and chickpeas are best when bought in bulk or dried, then prepared by soaking in water overnight.

There are 10 canned food items known to have a relatively high level of contamination, and should be avoided, according to the Breast Cancer Fund and the Silent Spring Institute. This canned food list includes:

Use Glass When You Can

If you’re avoiding cans, what packaging is safe?

The best alternative to tin cans is purchasing food in glass containers. Glass is considered impermeable and nonporous, and there is almost no interaction between the glass and the food. This means the flavor of the food remains the same. Glass containers have the highest FDA status of generally recognized as safe (GRAS).

You can buy fresh soups, condiments, and some tomato sauces in glass containers