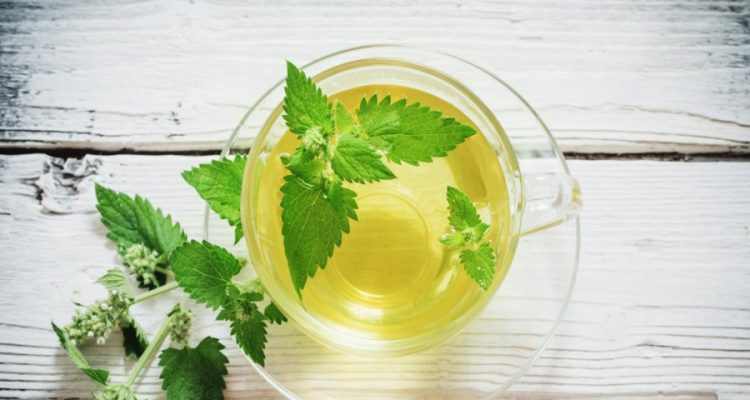 Spearmint (Mentha spicata) is a species of mint native to Asia and most of Europe. It is now grown throughout the year around the world. One of the many ways to use this mint is to prepare spearmint tea by infusing dried or fresh spearmint leaves in water.

Many of the reported spearmint tea benefits, as well as the distinct and pungent aroma, are attributed to the volatile oil known as carvone. But what is spearmint tea good for exactly? Spearmint tea may be able to fight inflammation and osteoarthritis, balance your hormones and polycystic ovary syndrome (PCOS), improve memory, boost immunity, treat digestive issues, and more.

In this article, we will explain everything you need to know about spearmint tea, including its nutrition facts, health benefits, and similarities with peppermint tea and green tea. We’ll also cover spearmint tea side effects.

And if you’re wondering how to make tea with both dried and fresh leaves, we’ve also included some tips and recipes for you to try.

What do you need to know about spearmint tea’s nutritional value?

In addition to the carvone in spearmint, other beneficial active compounds include the flavonoid thymonin, limonene, rosmarinic acid, menthol, caffeic acid derivatives, 1,8-cineole, and dihydrocarvone.

What about the caffeine in spearmint tea? It is important to note that spearmint tea is caffeine free, and it’s unrelated to the Camellia sinensis tea plant used to make teas such as green tea or black tea.

Spearmint has the ability to suppress pro-inflammatory mediators; as a result, it could potentially resolve inflammatory issues such as bronchial asthma, allergic rhinitis, and ulcerative colitis.

The anti-inflammatory properties of spearmint tea may also target joint pain, particularly when it comes to rheumatoid arthritis and osteoarthritis.

A number of animal studies have reported the analgesic effects of spearmint oil, and that its compounds menthol, limonene, and carvone can reduce pain severity in osteoarthritis patients.

A study published in the Journal of Medicinal Food in 2014 also singled out the rosmarinic acid in spearmint tea as being responsible for significantly improving stiffness and reducing pain in 62 adults with knee osteoarthritis.

Another interesting benefit of spearmint tea is how it can impact your body’s hormonal balance. How does spearmint tea benefit hormones? In particular, spearmint tea for PCOS management relies on the tea’s ability to lower androgenic hormones. Consequently, this tea could reduce unwanted, male-pattern hair growth in women—also called hirsutism.

What is the spearmint tea anti-androgen effect? The connection between spearmint tea and hirsutism is the hormone androgen, which is primarily responsible for male reproductive development. Women with PCOS produce excess amounts of the hormone, and may experience the discomfort of hair on their face, breasts, and stomach.

The first study, published in the journal Phytotherapy Research in 2010, tracked 41 women with PCOS and hirsutism over a 30-day period. The researchers found that consumption of spearmint tea twice daily had resulted in a reduction in androgen hormone levels, cell turnover time, and follicular hair growth.

The other study, published in 2007, included 21 female hirsute patients—nine with hirsutism and 12 with PCOS. After five days of drinking spearmint tea, there was a reduction in free testosterone and an increase in follicle-stimulating hormone (FSH) and luteinizing hormone (LH).

LH is a hormone that triggers ovulation and maintains regular menstruation. FSH, on the other hand, ensures proper maturation of ovarian follicles, and this can help with fertility.

However, it is important to note that the above studies were short in length. Like most herbal remedies, spearmint tea must be consumed for a longer duration for better results.

Is spearmint tea for hair loss as well? As an anti-androgen agent, spearmint tea is able to stimulate blood circulation, and therefore potentially hair growth.

In men suffering from hair loss caused by androgenetic alopecia (AGA), spearmint tea is apparently able to reduce levels of the hormone-free testosterone.

This also results in less of the androgen hormone DHT (dihydrotestosterone).

Is spearmint tea for blood pressure and other heart problems as well? As mentioned, spearmint is able to enhance blood circulation. The iron in spearmint has a positive effect on the circulatory system and blood production, whereas the high potassium content in spearmint may help to control blood pressure.

Potassium does this by dilating your blood vessels and relieving the stress on your arteries and blood vessels.

As a result, spearmint tea might be a useful part of any heart-healthy diet designed to prevent atherosclerosis, heart attacks, and strokes.

The powerful compounds in spearmint tea are also able to reduce the severity of respiratory illnesses such as bronchial asthma and chronic obstructive pulmonary disease (COPD), according to some studies.

The naturally soothing effect of spearmint is able to reduce inflammation, which has a significant impact on your respiratory system. As a result, spearmint tea may help soothe sore throats, relieve chest tightness, and alleviate congestion and sinus problems.

In particular, spearmint tea is thought to ease the symptoms associated with COPD, including coughing, wheezing, and difficulty breathing. A Chinese study published in 2008 found that spearmint oil has a protective effect on lung injury in rats with COPD due to its ability to improve pulmonary inflammation and relieve oxidative stress.

Another fascinating benefit of spearmint tea is the way it seems to improve memory. Research shows that the antioxidant limonene found in spearmint tea can help counteract free radicals and increase neurotransmitter activity, and this may improve concentration, focus, the ability to learn, and memory.

Spearmint tea is also packed with antibacterial properties that inhibit the growth of pathogens and strengthen your immune system. According to one 2001 study, spearmint is able to fight bacteria such as Escherichia coli (E. coli), Salmonella enteritidis, and Helicobacter pylori (H. pylori).

The phenolic compounds in spearmint thought to be responsible for its antibacterial activity include carvone, myrcene, muurolene, and limonene. The effect of spearmint is so strong that is able to benefit those resistant to antibiotics.

The antibacterial effects of spearmint tea can also help you maintain proper oral health, which leads to fresh-smelling breath.

Those with a poor immune system are more likely to have a fungal infection. The antifungal effects of spearmint can help inhibit the spread and growth of fungal infections, such as athlete’s foot, ringworm, and yeast infections.

Although spearmint had a positive effect in this study, in excessive amounts, it can negatively impact your liver, which may worsen liver damage.

Free radicals are thought to be the main cause of cellular breakdown and the development of chronic diseases such as cancer. Cancer, in particular, is linked to free radicals that stimulate cellular mutations. However, the antioxidants in spearmint tea may be able to eliminate free radicals without putting a strain on the immune system.

One 2004 study showed that spearmint extract inhibited mutagenic activity, which can possibly inhibit the activation of carcinogens.

The anti-inflammatory compounds of spearmint tea might also calm your stomach when you experience irritable bowel syndrome (IBS) and digestive symptoms including nausea, vomiting, bloating, gas, constipation, and abdominal cramping.

Abdominal pain is a common symptom of gastric ulcers. Research shows that spearmint is effective at inhibiting H. pylori bacteria, which are considered the most common cause of a gastric ulcer.

Since spearmint has been proven safe during pregnancy, many pregnant women also drink spearmint tea to ward off nausea and vomiting associated with morning sickness. This condition is common during the first few months of pregnancy.

The menthol in spearmint tea contains sedative and antidepressant properties. This has a calming and soothing effect on the body, and could help eliminate the negative effects of stress hormones and reduce chronic stress, anxiety, and depression.

Spearmint is also rich in limonene and carvone, and the sweetness of spearmint is less strident than peppermint. Just as spearmint tea, peppermint tea benefits the sinuses, joints, and hair growth while potentially treating bad breath; asthma; PCOS symptoms; and IBS symptoms like nausea, gas, and bloating.

What about spearmint tea vs. green tea? As mentioned earlier, spearmint tea is free of caffeine, and it is not related to green tea’s plant source Camellia sinensis. Although both teas have antioxidants, the most common types in green tea are catechins, polyphenols, and other types of flavonoids.

How to Make Spearmint Tea: Recipes

The following is a spearmint tea recipe for both dried and fresh spearmint leaves.

Steep the tea for about three to seven minutes.

Side Effects of Spearmint Tea

Excessive amounts of spearmint tea can also negatively impact your liver and kidney, which may lead to liver or kidney damage. For those with kidney and liver disorders, symptoms may worsen if spearmint tea consumption is not monitored.

Spearmint has also been reported to cause allergic skin rashes or muscle pain in some people.

As with any natural remedy, consult with your doctor or pharmacist before beginning a spearmint tea regimen.

Tea consumption can play a significant role as part of a healthy lifestyle regimen, and this is especially true for spearmint tea.

In this article, we answered the question, “What is spearmint tea good for?” Spearmint tea benefits may include enhancing the respiratory system, fighting inflammation and osteoarthritis, strengthening the immune system, relieving stress, improving memory, and protecting the liver.

Drinking spearmint tea for PCOS can also improve unwanted, male-pattern hair growth in women, which is a condition also known as hirsutism.

We also explained in detail how to make spearmint tea. Enjoy spearmint tea with either dried or fresh spearmint leaves. Spearmint tea is very comparable to green tea and peppermint tea; however, nothing beats the sweetness of spearmint.