Home > Food Advice > Cured vs. Uncured Ham: Which Is Better? 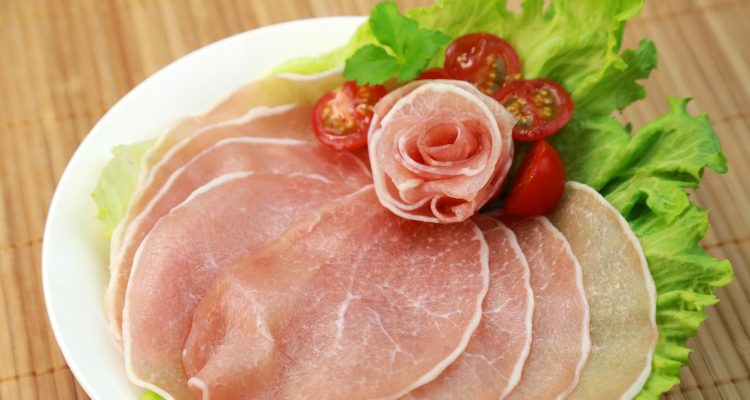 Ham is made from the hind leg of a hog. Fresh, uncured ham is an unpreserved leg of pork, whereas cured ham is processed ham that is preserved through wet or dry curing that may include smoking. The curing process may also include adding a combination of sugar, salt, and other flavors.

The color of cured ham will be pink or deep rose. Prosciutto and country hams are dry cured; therefore, their color ranges from pink to mahogany. Fresh hams, on the other hand, will be pale pink or beige—the color of a fresh pork roast.

In this article, we will continue to explain the characteristics of cured vs. uncured ham. We will also discuss how to cook uncured ham and cured ham, and which ham is better, as well as how to store each ham.

Cured vs. Uncured Ham: What Is the Difference?

What is the difference between cured vs. uncured ham? To answer that, let’s first address the question, “What does cured ham mean, exactly?” Cured ham is made by adding artificial nitrates or nitrites like sodium nitrite or potassium nitrite, sugar, phosphates, and other seasonings and preservatives to a regular mixture of salt and brine.

Nitrites are important for curing because they help prevent bacterial growth on meat.

If not properly preserved, the ham would decompose rapidly. Most meat cannot be kept at room temperature without spoiling, and consumption of spoiled meat can cause food poisoning, like botulism due to Clostridium botulinum. Cured meat therefore has a significant shelf-life.

You can make cured ham yourself. For a home-cured ham, you will either smoke it or pack it with salt, sugar, and other flavors.

Dry curing is another process used to make prosciutto and country ham. This is where fresh ham is rubbed with a dry mixture of salt and other ingredients. As a result, a dry-cured ham will taste quite salty.

Now, what does uncured ham mean? Simply put, uncured ham has not been cured with sodium nitrites. Instead, it is cured with a celery mixture, which has natural-occurring nitrites, sea salt, and other flavors like beet and parsley extracts. Uncured ham will therefore be labeled: “No nitrites or nitrates added.”

Cured vs. Uncured Ham: Which Is Better?

When it comes to cured vs. uncured ham, which is better?

This question often comes down to the nitrites added to cured ham. Again, the nitrites are added as a preservative to prevent and/or delay bacterial growth, which can cause botulism.

However, nitrites in ham and other meats are also associated with a higher risk of cancer. This is because in the stomach, nitrites convert to nitrosamines, which are considered deadly carcinogens.

A meta-analysis published in the British Journal of Cancer in 2012 found that 50 grams daily of processed meat, such as ham, consumption was statistically linked with a 19% increased risk of pancreatic cancer.

The nitrites in uncured ham are a little better. Nitrites occur naturally in many foods like vegetables. In uncured ham, it is cured with the celery mixture that also contains sea salt and parsley and beet extracts.

Uncured ham doesn’t put you at risk of cancer because the vegetable mixture is also high in vitamin C, which prevents the conversion of nitrites to nitrosamines. As a result, uncured ham is considered a lot safer for you than cured ham.

How do you store your ham? In this section, we will examine storing cured vs. uncured ham.

Uncooked, a cured ham will last five to seven days in the refrigerator, or you can follow the “use-by” date provided on the package. It will also last three to four months in the freezer.

Cured vs. Uncured Ham: How to Cook

Now, it’s time to cook your ham. In this section, we will look at how to cook a cured ham vs. an uncured ham.

You can also boil the cured ham until the thermometer reads 160 degrees Fahrenheit, which will be about 20 to 25 minutes per pound.

Is uncured ham ready to eat? Not unless you cook it first. You will need to put forth a little more effort when it comes to cooking a fresh, raw uncured ham. This process will be similar to preparing a turkey.

The following is an uncured ham recipe:

Throughout this article, we learned the differences between cured ham and uncured ham, including how to cook and store them.

That being said, when it comes to cured vs. uncured ham, which one should you get? Cured ham and uncured ham both contain nitrites; however, the vegetable-based nitrites in uncured ham are considered natural and present no known harm to your health.

On the other hand, the nitrites in cured ham are thought to convert to carcinogens called nitrosamines.

As a result, if ham is on your shopping list, I would suggest you put uncured ham in your cart rather than cured ham.