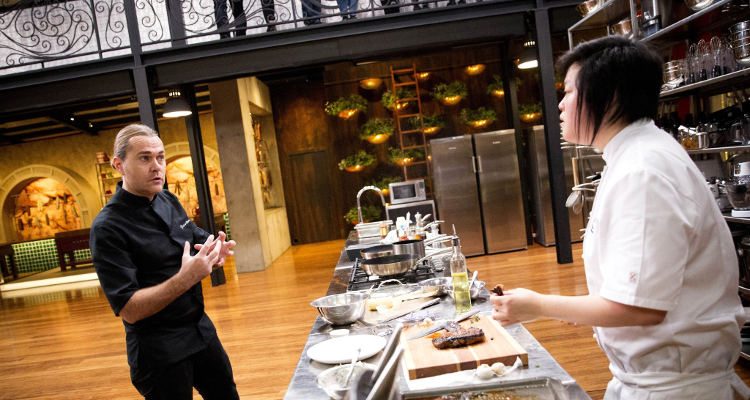 The contestants look super excited and well-prepared to give their best and get immunity. As they enter the MasterChef kitchen, they come across the dexterous cook, Shannon Bennett.

Bennett will be on MasterChef every week to guide and mentor the contestants through every immunity challenge. Out of the three, only one contestant will be able to win immunity.

The immunity challenge has two rounds. For round one, the trio must cook anything of their choice. Round two includes competing against the top chef and defeating him.

The judges wanted the trio to get creative and make some quick, nutritious, and savory dinner recipes in just 32 minutes. This week is a home-cooking week, so the contestants don’t get to use the chef equipment, and the trio is allowed only one visit to the pantry. They just rush to the pantry and try to grab as many things as they can remember for their dish.

Tiong prepared a pan-fried barramundi with bok choy and vinaigrette. She cooked the fish beautifully.

Verkerk dished lamb with pickled Asian mushrooms. She forgot two important ingredients—sugar and rice. But, then she chopped some green onion whites to add sweetness to her dish.

Wilson prepared a lamb cutlet with a smoky eggplant puree. It has nice, clean flavors.

All four judges loved Tiong’s dish including the hot dressing. As a result, Tiong emerged as the winner of round one.

The rules for round two included cooking any one dish of choice. The time limit was 75 minutes for Tiong, and 60 minutes for Di Blasi. The judges brought in their home fridges for the challenge.

Tiong had to select a fridge without knowing ingredients inside it. After careful thought of the judges’ individual taste, Tiong went on and selected Mehigan’s fridge. It includes lots of fresh leafy greens, fruits, vegetables, and spices.

She chooses to prepare XO marinated steak with pickled mushrooms and potato mash. Bennett tells her that mashed potatoes and XO don’t go well together. She then decided to use two kinds of potatoes and prepare them differently.

Di Blasi also had to select ingredients from the same fridge. He chose some sauces and fish to prepare whiting sashimi with roast bone dressing and avocado puree. Di Blasi shocked Bennett and the other contestants when he said that he would be preparing sashimi.

The judges tasted both dishes and felt that Di Blasi’s dish was very flavorful and fresh. They also loved Tiong’s steak which was cooked and caramelized to perfection, having the flavors of the sauces. The mash was tasty, creamy, and smooth, but it didn’t pair well with the XO the judges said. Tiong scored 23, and Di Blasi scored 27.

Even though Tiong ended up being the loser, she was glad to get a chance to compete against a proficient chef. We are sure you are looking forward to watching the next episode of MasterChef Australia season 9 to see who wins immunity, as well as the amazing recipes the contestants will conjure up.