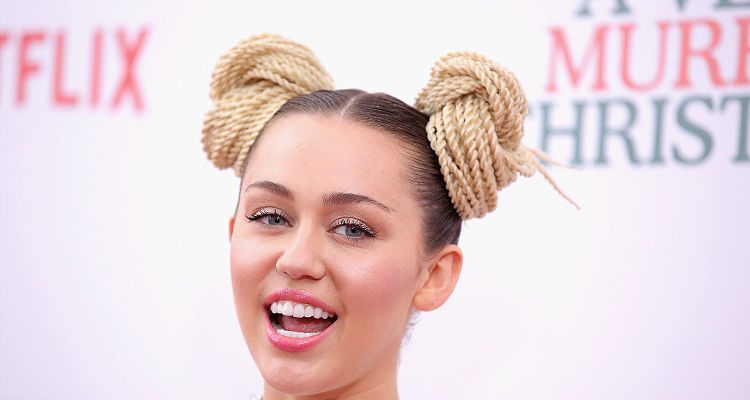 Miley Cyrus, Jenna Dewan, and Jared Leto are all vegans who credit the plant-based diet for their slim and fit physiques. But diet alone hasn’t gotten them the bodies they have. Regular exercise has definitely played a large part in the toned abs and strong legs that these three have. Cyrus loves to show off her gorgeous legs in short shorts, and Dewan, a dancer, is not shy about it either.

Though mostly vegan, Leto does admit that he is flexible with his dietary choices and would eat a cookie if his mom handed it to him. A cookie every now and again won’t throw off any of the benefits of following a vegan diet, and cheat days are good for the soul. A plant-based diet has been shown to be beneficial for the heart and can prevent heart disease, including high blood pressure and stroke.

Liam Hemsworth’s fiancée Miley Cyrus decided to skip the MTV VMAs this year as she was out for dinner in Malibu.

The “Party in the USA” singer went to Soho House with mom Tish and shared that she was too busy for the awards show because she would be doing some yoga and making out with her dogs. Okay, Miley. It seems the singer wasn’t shy to show off her incredible legs, though.

While she was out and about, Cyrus was snapped wearing a tailored and frilly white blouse and short shorts with some killer combat boots. Her legs look lean and strong, so let’s find what Miley Cyrus does to stay in shape.

As a new judge for the 11th season of the hit TV show The Voice (which premiered Sept. 19), Miley Cyrus will sit alongside fellow musicians Blake Shelton, Adam Levine and Alicia Keys.

She also has a sixth studio album that’s in the works. Seriously though, who can forget Miley Cyrus in her music video for “Wrecking Ball,” where the singer was wearing absolutely nothing! She definitely has to keep in shape to have that kind of confidence.

Jenna Dewan Tatum, who is married to Sexiest Man Alive Channing Tatum, follows veganism quite strictly and works out hard to get those ripped abs she is also famous for. Dewan Tatum is a dancer first and foremost, and that’s how her career started.

She’s actually danced for Janet Jackson, but she’s also acted in TV shows, including Supergirl and Witches of East End. The dancing beauty, 35, has her own production company now as well, so this mom of one has her hands full but still manages to take time out of her week to focus on her health and fitness.

She admits to not wanting to work out all the time; and if she doesn’t feel like it, she will use every excuse imaginable to talk herself out of going. And some days of the week she is simply too busy to squeeze one in, much like the rest of us mere mortals. Other times she just wants to hang out with her family.

That being said, she does love the 45-minute power workout. She says she gets in, does her thing, and then she’s able to go pick up daughter Everly from school. That workout gives her energy, she says. If there’s time, she will fit in a dance class – her first fitness love.

She grew up dancing and was in the competitive dance world, so clearly she was passionate about it.

Suicide Squad Joker actor Jared Leto had to bulk up to play the villain. However, Leto has followed a vegetarian and vegan diet for years, which made gaining muscle a little more difficult for the 44-year-old.

In a 2015 article in Billboard magazine, Jared Leto revealed his secret to gaining muscle mass while eating vegan tacos. Jared Leto’s vegan diet interview mentioned that the actor had to eat every couple of hours, and it noted that he’s terrible at eating a lot of food.

Basically, the secret to Leto’s super-ripped Joker body is eating lots of healthy vegan snacks that are high in protein and calories. The vegan diet paid off for Leto. The Thirty Seconds to Mars singer has been eating a vegetarian and vegan diet for around 20 years, but his diet does allow for some wiggle room.

For starters, does Jared Leto eat fish? The Academy Award winner apparently doesn’t eat meat ever, but he does call himself a “cheagan,” which is a cheating vegan.

Leto admits that if someone’s mom handed him a cookie, he’d probably eat it, and he would probably eat wild salmon from the river if he were in Alaska. Therefore, his diet appears to fall under the “flexitarian” category, which allows for some animal foods on occasion.

When eating strictly vegan, it is crucial to make sure that the body is getting enough protein and iron. Iron-rich foods are mostly animal proteins, so vegans and vegetarians often suffer from low iron. Legumes and beans are good sources of iron, so be sure to eat beans at least once a day to stave off iron deficiency.

One way to fit beans and legumes into the diet regularly is to make a bean salad and eat that as a main meal at lunch or as a side dish with dinner. Toss a variety of beans together and add fresh vegetables of your choice. Top with a vinaigrette, mix, and keep refrigerated for up to five days. It is simple to make and very nourishing.