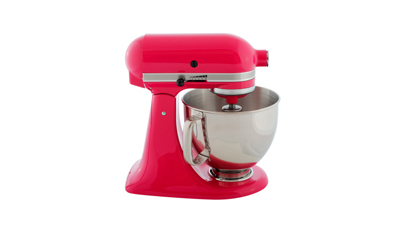 Whether I’m making hummus from scratch or homemade sauces, my food processor definitely comes in handy. It’s probably the number one gadget I believe every kitchen should have… but apparently, it’s also a kitchen essential likely to cause salmonella, too, according to a new study published in Applied and Environmental Microbiology.

Irish researchers wanted to determine how salmonella can stick to kitchen surfaces—and how they can be removed, if at all. And the results are definitely disturbing for my fellow food-processor-loving-chefs.

They tried using three different disinfectants to remove salmonella bacteria cells from a hard surface, and, with all three disinfectants, it was impossible to get rid of the bacteria!

Many people cooking at home use a regular dish rag and soap to clean off cutting boards, food processors, and other kitchen utensils that have come into contact with raw meat and poultry—but just rinsing and washing aren’t enough to kill off salmonella bacteria that could have already been transferred to those utensils, the researchers have realized. And this makes salmonella outbreaks possible and likely.

It’s one of the reasons that the United States Department of Agriculture (USDA) recommends people not to wash their chicken before preparing it, since washing will spray bacteria from the chicken all over your kitchen surfaces, which, as researchers have now shown, is difficult—if not impossible—to remove.

This study also helps explain the mystery of a salmonella outbreak in 10 European countries last year that caused 160 people to get sick with gastroenteritis.

The outbreak was traced back to a meat processing facility, where cooked meat at the facility was contaminated by raw meat at the same handling facility. This puzzled health officials, who thought that perhaps this might be some super-salmonella bacteria that was able to survive in the cooked food and contaminate the other foods—but what this study shows is that all salmonella bacteria possess the same capability.

While food processing facilities often follow strict regulations to ensure proper food handling, people like myself who cook at home need to be more aware of the dangers of salmonella, which causes about 23,000 hospitalizations and around 500 deaths every year. This bacteria can stick to any kitchen surface—your cutting board, your sink, your countertops, and food processor—and stay there.

Don’t let this news take the fun out of cooking—all it means is you need to be safe when you put on your chef’s hat and get cracking.